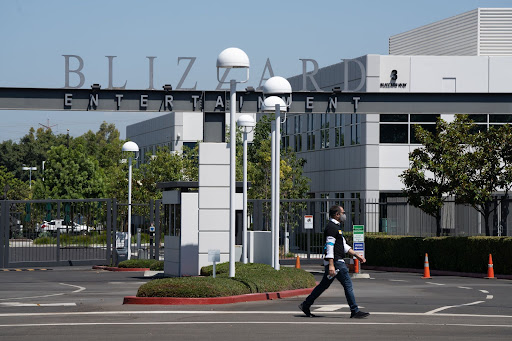 (Bloomberg) -- Activision Blizzard Inc., which has faced allegations of sexual harassment, and Monster Beverage Corp. are among the companies that have a month to add women to their boards to comply with a California law promoting gender diversity.
Image: Bloomberg

Activision Blizzard, which has faced allegations of sexual harassment, and Monster Beverage Corp are among the companies that have a month to add women to their boards to comply with a California law promoting gender diversity.

Unless a judge finds the rule itself is a form of discrimination.

A trial is due to start on Wednesday in Los Angeles on whether the law can be enforced. It’s likely to take at least seven days. The case was brought by the conservative advocacy group Judicial Watch, which claims the law is unconstitutional because it violates the Equal Protection Clause of the California constitution.

California courts are likely to uphold the gender mandate just as European courts have backed similar efforts, said David Oppenheimer, a professor at the University of California at Berkeley School of Law.

“These laws have become commonplace in much of the world, especially in Europe. They have faced challenges based on the argument that they were discriminatory but the general reaction of European courts has been that they are simply promoting equality,” Oppenheimer said.

In 2018, California became the first US state requiring a minimum number of female directors on boards of public companies. Under the law, companies whose principal offices are based in the state had to have at least one female board member by the end of 2019 and two by the end of 2021 if the corporation has five directors, or three if it has six or more directors.

Other companies that have yet to meet the 2021 requirement include Advanced Micro Devices, and Skechers USA.

In a March 2021 California report on compliance with the law, Activision Blizzard, Monster Beverage, Advanced Micro Devices and Skechers were among 647 public companies identified as listing a principal executive office in the state, and thus among the “impacted corporations”.

The state said only 318 of the 647 public companies had disclosed whether they comply with the requirements. California hasn’t imposed any fines under the law, said Jenna Dresner, a spokesperson for California secretary of state Shirley Weber.

“The secretary of state retains the discretion to implement fines depending on the facts and circumstances at the time any such decision is made,” Dresner said.

Many larger companies appear to be in compliance, though. Among about 575 companies listed in the Russell 3000 stock index with a California domicile, where gender data on the directors is available, only 139 companies with a board larger than six members had fewer than three female directors, according to data compiled by Bloomberg.

Even if the California law is struck down by the judge, it’s already had an impact. At least 11 other states have enacted or are considering board diversity legislation.

In December 2020, Nasdaq proposed a “comply or explain” rule that the Securities Exchange Commission approved in August 2021. It will result in most companies listed on its exchange to have at least one female director and one director who self-identifies as being part of an underrepresented minority group.

No US company so far has publicly opposed quotas aimed at diversifying boards as shareholders are demanding more balance.

Santa Monica-based Activision Blizzard, which has two women on its 10-member board, said in a November 22 statement that it’s working to add a new, diverse board member as part of a plan to eliminate workplace harassment and discrimination. It hasn’t specified whether that would be a woman, and didn’t respond to repeated requests for comment.

The maker of blockbuster games, including Call of Duty and World of Warcraft, has been in turmoil since being sued in July by California’s department of fair employment and housing over allegations of sexual harassment, unequal pay and retaliation.

Activision Blizzard workers have staged walkouts and signed petitions criticising the workplace culture, amid allegations of sexual misconduct. The company has pledged to make itself more welcoming and inclusive.

Advanced Micro Devices, Monster Beverage and Skechers also didn’t respond to requests for comment on plans to add additional female directors before the end of the year.

California will determine which companies aren’t complying with the law in the first quarter of 2022 after reviewing their state regulatory filings. The law requires that the office of the California secretary of state post on its website reports on the status of compliance with the law. Under the statute, the secretary may impose fines, from $100,000 to $300,000 per violation.

A ruling against California in the Judicial Watch suit could potentially influence the outcome of a similar challenge against the gender quota rule brought by an investor.

A Sacramento federal court judge is expected to rule soon on a request from Creighton Meland, a shareholder of OSI Systems, to block the gender quota rule. An appeals court allowed that suit to proceed after overruling a judge who said Meland can’t challenge the mandate as a shareholder.

Other lawsuits challenging diversity requirements are also pending. California was sued over a separate law that requires a public corporation by the end of this year to have at least one director from an underrepresented community — which includes Blacks, Hispanics, Native Americans, gays or transgender.

Judicial Watch also sued to stop enforcement of that law in September 2020.

The Securities Exchange Commission has also been sued over its approval of Nasdaq’s diversity rules.

Domestic violence is a scourge that’s causing substantial damage to economies alongside the harrowing consequences it has on its victims.
News
1 month ago