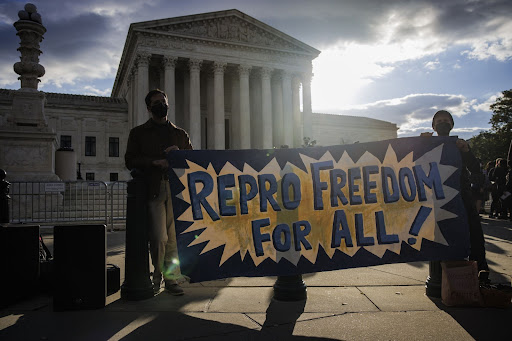 The US Supreme Court is this week hearing a case that could overturn the landmark 1973 Roe vs Wade ruling, a move that would wipe out abortion access for women in almost half the country.

Roe now guarantees constitutional protection for getting an abortion up until fetal viability, which is after the 20th week of pregnancy. On December 1, justices will hear arguments for Dobbs vs Jackson Women’s Health Organization, a case involving a 2018 Mississippi law banning abortions after 15 weeks of pregnancy. The Mississippi attorney-general has asked the court to overturn Roe, which would leave it up to states to make their own regulations.

In the absence of Roe, 22 US states have laws on the books that would outlaw the procedure in all or most cases, with others indicating they may move in a similar direction.

Idaho, Texas and South Dakota are among a dozen states that have so-called trigger laws, total or near-total abortion bans designed to go into effect if Roe is gutted, according to the Guttmacher Institute, a research nonprofit focused on reproductive health. At least nine other states have additional restrictions considered unconstitutional under Roe. Currently, almost 40-million women of reproductive age live in states that Guttmacher categorises as hostile to abortion rights.

“The Dobbs case is one — if not the most — consequential abortion rights cases since Roe vs Wade,” said Nicole Mason, CEO of the Institute for Women’s Policy Research.

Current restrictions have resulted in hundreds of clinic closures over the years, leaving many Americans hundreds of kilometres from the closest provider. The facility at the centre of the Dobbs court case, also known as the “Pink House”, is the only remaining clinic in Mississippi.

States have tried passing increasingly restrictive bans on when women can seek abortions though they are often deemed unconstitutional. Texas has a six-week abortion ban in effect that deputises private citizens as enforcers, effectively rendering most abortions illegal in the state.

“There are already states, particularly in the south where there’s almost no access to abortion, where so many barriers have been put up that it’s basically impossible,” said Scott Roberts, senior director of criminal justice campaigns at Color of Change, an advocacy group for the equality of black people. Black women are four times more likely than white women to seek abortions, according to the group’s site.

Low-income and minority women are most likely to seek abortions in the US. Studies have found that women who want an abortion but cannot get one are four times more likely to live below the federal poverty line.  State-level abortion restrictions cost state economies about $105bn per year by cutting labour force participation and earnings, according to IWPR, a reproductive rights research organisation.

“Regardless of the ruling, there will be a fight,” Mason said. “There is a constant struggle for women to protect their constitutional guaranteed right.”

Justice department lawyers asked for the law to be blocked temporarily, saying Texas enacted it in open defiance of the constitution
World
7 months ago