While the full impact will get clearer over coming days, ‘this will be problematic for business travel’ 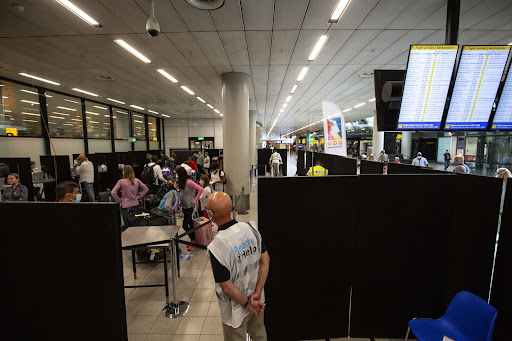 Airlines, passengers and businesses scrambled to respond to a deluge of travel restrictions announced over the weekend to slow the spread of the Omicron coronavirus variant.

An initial spate of flight bans from southern Africa, where Omicron was first detected, gave way to more wide-ranging measures that will make travel more expensive and less convenient — if possible at all — recalling earlier days in the pandemic.

The UK re-introduced mandatory PCR tests for all arriving passengers and said they must self-isolate until receiving a negative result. Israel closed to all inbound foreign nationals for 14 days, while the Philippines said travellers from European countries including Switzerland and the Netherlands won’t be welcome for several weeks.

Spain and Switzerland tightened access for arrivals from Britain, whose travel comeback has quickly been thrown into reverse. UK low-cost carrier EasyJet  said Sunday its flight schedule was operating as normal, “however we continue to monitor the situation closely”.

While the full impact will get clearer over coming days, “this will be problematic for business travel — particularly inbound into the UK”, said Martin Ferguson, a spokesman for American Express Global Business Travel.

Organisers of the World Aviation Festival in London told attendees the event will go on as scheduled starting Tuesday, the day the new UK rules come into effect. The group arranged for testing at two nearby hotels where delegates who are guests can self-isolate while awaiting results.

A separate, internal corporate event in the UK was shifted to hybrid from in-person, because the new testing and isolation requirements would have caught out some attendees set to arrive on Tuesday, according to a person familiar with the matter.

Leisure travel will also see an impact, while friends and relatives visiting loved ones after long absences are more likely to go through with a trip, said Alex Irving, an analyst at Bernstein in London.

“Christmas bookings will obviously be weaker than we had expected prior to the omicron variant,” he said. “As you add barriers to travel such as the PCR tests and isolation requirements, all that does is changes the incentives.

Airlines now face a return to the uncertainty of shifting rules and public-health developments that threw customer plans into chaos and undermined demand earlier in the pandemic.

British Airways, for example, halted flights to Hong Kong through at least November 30 after one employee tested positive for Covid-19 and staff were sent into quarantine. The airline said it’s keeping its operations under review as the situation evolves.

Singapore and Japan are among countries that have said they’re considering tighter border restrictions.

The risk of a second lost winter has already tanked shares of airline stocks, with the Bloomberg EMEA Airline Index down 18% this month. This will make it harder to raise fresh capital to repair balance sheets — British Airways parent IAG has €12.4bnin net debt, for example.

“This comes at a time of year when airlines will seek to bolster liquidity and to a modest extent profitability, and is after an already arduous 18 months of revenue depletion,” said John Strickland, who heads London-based JLS Consulting.

Two passengers in Sydney from Southern Africa test positive, with both asymptomatic and fully vaccinated
World
8 months ago

The World Health Organization listed the mutated virus, now named Omicron, as a “variant of concern” Friday
News
8 months ago

The damage in SA will be severe, regardless of market reactions
Opinion
8 months ago
Next Article