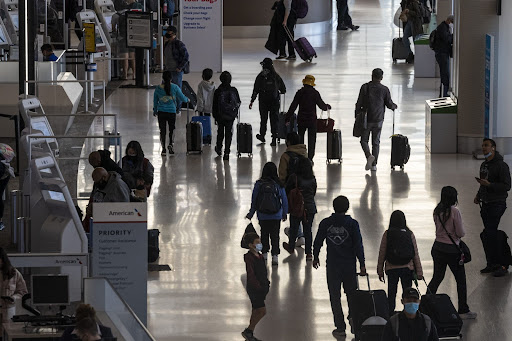 The administration will restrict travel from SA and seven other countries starting on Monday, according to senior administration officials. In a statement, Biden called the decision a “precautionary measure until we have more information.”

In addition to SA, the restrictions affect Botswana, Zimbabwe, Namibia, Lesotho, Eswatini, Mozambique and Malawi. The policy doesn’t apply to American citizens and lawful permanent residents, though they must still test negative before travel to the US, according to administration officials.

The ban may fuel concerns about the variant, which triggered a market sell-off as investors parsed emerging data about its potency and how quickly it spreads. The S&P 500 closed 2.3% lower during an abbreviated session on Friday, the biggest one-day drop since February, and the tech-heavy Nasdaq 100 Index lost 2.1%. The Bloomberg EMEA Airlines Index sank 11.3% on the day.

Biden told reporters the new variant is of “great concern” because “it seems to spread rapidly.” But he said he was “not at all” concerned about investors selling shares because it was “expected — they always do when Covid-19 rises.”

The World Health Organization listed the mutated virus, now named Omicron, as a “variant of concern” Friday as a growing list of nations moved to block travel from the region. Countries across Europe halted air travel from Southern Africa earlier in the day, as did Canada.

“As we move forward, we will continue to be guided by what the science and my medical team advises,” Biden said in a statement. “The news about this new variant should make clearer than ever why this pandemic will not end until we have global vaccinations.”

The announcement is a reversal of course for Biden’s administration, which earlier this month abandoned country- or region-specific measures and replaced it with a system that hinges on a traveller’s vaccination status. Friday’s announcement leaves the US with a hybrid system of travel bans on unvaccinated foreigners as well as a broader ban on the eight countries designated Friday, which have comparatively lower vaccination levels.

The administration didn’t immediately detail its restrictions, including what exemptions were considered and whether people from the affected countries could enter if they spent a particular period of time in another region beforehand.

Anthony Fauci, one of Biden’s top health advisers, said earlier Friday that officials would act after reviewing scientific data with counterparts in SA. Biden said he made the decision after a briefing by Fauci and members of his Covid-19 response team.

American health officials spoke with their South African counterparts midday New York time on Friday to gather medical and scientific data about the newly discovered variant. The administration remains in touch with health experts across Southern Africa to learn more about the variant.

Biden again urged Americans to get vaccinated, and to get booster shots, to bolster their own protection. All US adults are eligible for boosters six months after their second dose, or two months after receiving Johnson & Johnson’s one-dose vaccine.

Biden also called on other nations to step up donations of vaccines and for a World Trade Organization ministerial meeting next week “to waive intellectual property protections for Covid-19 vaccines, so these vaccines can be manufactured globally.”

European Commission President Ursula Von der Leyen proposed activating an emergency ban for air travel from Southern Africa until there’s a clearer understanding of the potential dangers. The UK also closed the routes, though no cases of the new variant have yet been detected in the country.

The fear is that the mutated new coronavirus may be more resistant to vaccinations or the body’s own immune response after earlier infections.

It’s not clear how significant a new US ban on flights from Southern Africa would be in itself. There are only a handful of direct flights between the US and SA. The overall market between that region of Africa and the US is also relatively small compared to domestic travel and other international destinations, such as Europe.

The bans are being enacted under section 212(f) of the Immigration and Nationality Act, one official said, the same law that the US used to restrict direct travel from Europe and elsewhere earlier on in the pandemic.

The new travel restrictions threaten to undo progress the airline industry has had with growing domestic travel and the reopening earlier this month of US-European travel. Other governments, including Hong Kong, have enacted travel restrictions from the region.

“Amid this rapidly evolving situation, it is critical that US government decisions regarding international travel restrictions and requirements be rooted in science,” said Carter Yang, a spokesperson for Airlines for America, the trade group for large US carriers.

“International travel is critical to reviving economies around the globe, supporting millions of jobs in the US and abroad, reinvigorating communities and reuniting families,” Yang added.

Despite raising concerns about the new strain, SA’s Health Minister Joe Phaahla said new travel bans imposed on the country after the discovery of the new Covid-19 strain, particularly by the EU, were “unjustified.”

The moves “are completely against the norms and standards” advised by the WHO, Phaahla said Friday during an online press conference.

A total of 2,465 new  infections and 114 deaths recorded in SA
National
8 months ago

Global authorities reacted with alarm on Friday to a new coronavirus variant detected in SA, with the EU and Britain among those tightening border ...
World
8 months ago
Next Article