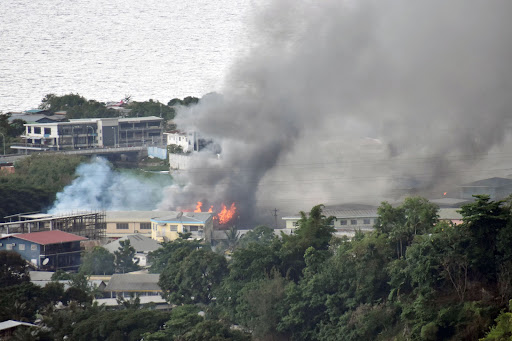 Protests have been linked to the Pacific nation’s diplomatic switch from Taiwan to China. Picture: BLOOMBERG

Australia will send soldiers and police to the Solomon Islands in a bid to help quell violent protests that have been linked to the Pacific nation’s diplomatic switch from Taiwan to China.

“Our purpose here is to provide stability and security to enable the normal constitutional processes” can proceed, Australian Prime Minister Scott Morrison told reporters on Thursday. About 75 members of the defence force and federal police, along with a patrol boat, will be deployed immediately to support riot control and critical infrastructure, he said.

Police used teargas and rubber bullets to disperse about 1,000 anti-China protesters who were demanding the resignation of Prime Minister Manasseh Sogavare in the Solomon Islands’ capital of Honiara, the Australian Broadcasting Corporation reported. Buildings were stoned and a traditional leaf hut next to Parliament House was torched.

It’s been two years since the Solomon Islands — one of the biggest economies in the region — recognised China and ended formal relations with Taiwan that began in 1983. Another Pacific nation, Kiribati, quickly followed suit in the first defections from Taiwan in the region since 2004.

The large Malaita province, however, has refused to recognise China causing friction with the national government that was linked to the demonstrations, the ABC reported. Daniel Suidani, who leads Malaita, has been a vocal critic of the decision to cut diplomatic ties with Taiwan in favour of Beijing, which opened an embassy in Honiara in September 2020.

Australia is sending troops to the Solomon Islands after antigovernment protests broke out in the capital, Honiara.

The Solomon Islands Herald reported that protesters looted and damaged shops in Honiara’s Chinatown, and marched to the Chinese embassy. A police station and parts of Honiara Senior High School were also destroyed, independent journalist Georgina Kekea reported, adding that a 36-hour lockdown has been enforced on the city in a bid to stop the riots.

“We are greatly concerned over attacks on Chinese citizens and businesses and have asked the local government to take all necessary measures to protect the safety of Chinese nationals and institutions,” Chinese foreign ministry spokesperson Zhao Lijian said at a regular press briefing on Thursday in Beijing.

“All attempts to disrupt the normal developmental relations between China and the Solomon Islands are just futile,” he said.

China’s expanding footprint in the Pacific Islands is a concern for the US and its close ally Australia. Diplomats in Washington and Canberra fear that Beijing’s end-game may be to establish a naval base that would greatly enhance its military reach towards the Americas.

Asked about whether the Solomons’ switch to recognise Beijing was a factor in Australia’s deployment, Morrison said on Thursday that “there are many different views within the Solomon Islands about those and other matters”.

“The domestic expressions about those issues are not the result of the actions, to the best of our knowledge, of any other agency outside the Solomon Islands,” Morrison said. Australia is deploying the troops as part of a treaty between the nations, he said.