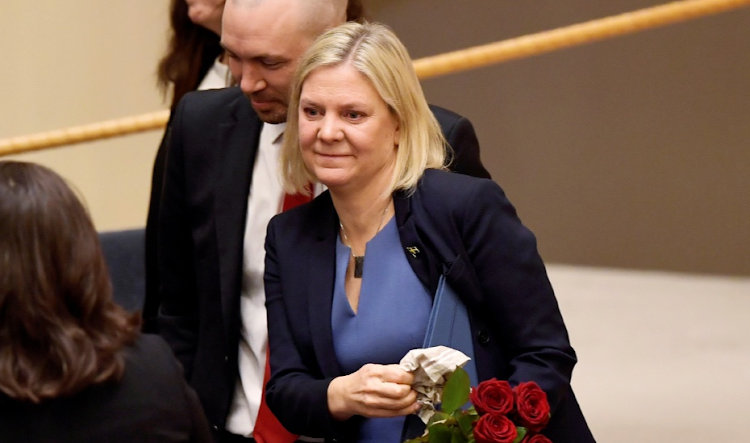 Magdalena Andersson is congratulated after being appointed as Sweden's new prime minister at the Swedish Parliament Riksdagen in Stockholm on November 24 2021. Picture: TT NEWS AGENCY via REUTERS/ERIK SIMANDER

A last-minute deal with the former communist Left Party ensured that a majority of legislators accepted the Social Democrat leader, 100 years after women in the country known for its egalitarian foundations were first able to exercise full voting rights.

“I am ready to lead a government that does what it takes to address Sweden’s problems,” Andersson, who has been finance minister since 2014, said at a news conference after the vote. “I have been elected Sweden’s first female prime minister and I am also aware of what that means for girls who grow up in our country.”

Andersson faces a fragmented legislature after the Nordic nation’s politics have been upended by the emergence of the far-right Sweden Democrats as surging gun crime and tension over immigration led to voter disillusionment. Her government controls only about a third of the seats, and later on Wednesday, her spending proposal for 2022 is set to be dismissed in favour of an opposition bill.

The budget vote illustrates that the kind of deal-making that carried Andersson’s predecessor, Stefan Lofven, to power may be a thing of the past.

While Lofven was able to form a government after an inconclusive 2018 election by co-operating with traditional opponents, a similar solution looks distant for Andersson, as centre-right parties have retreated from their support at the same time as the Left has taken a more assertive stance.

Losing the budget vote would mean Andersson’s cabinet will have to govern based on opposition proposals that entail a reduction of petrol taxes and more funding to the justice system, while her plans for tax breaks as well as an extra week off for families are ditched. Andersson said the outcome is unfortunate but that she can still govern the country based on the opposition bill.

In total, the opposition bill reallocates about 20-billion Swedish kronor ($2.2bn), out of 74-billion kronor, in extra spending that the government had proposed for next year.

Sweden’s next general elections are set to be held in September 2022, and opinion polls indicate no clear winner.