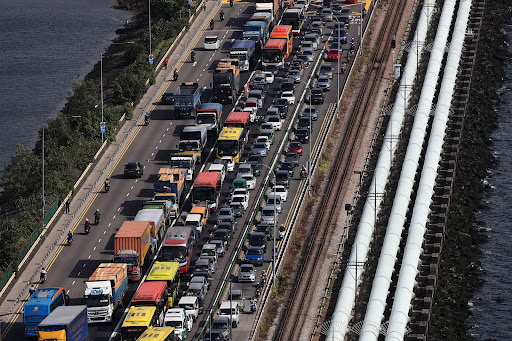 Singapore and Malaysia have agreed to reopen a causeway linking the two countries from Monday. Picture: BLOOMBERG

Singapore and Malaysia have agreed to reopen a causeway linking the two countries from Monday, allowing cross-border land travel for the first time since March last year.

Vaccinated passengers will be allowed on designated buses between Singapore and Johor Bahru, the southernmost city on the Malaysian Peninsula, the two governments said in statements on Wednesday.

“The causeway was one of the busiest land borders in the world before the Covid-19 pandemic disrupted our cross-border activities,” Singapore Prime Minister Lee Hsien Loong said. The reopening is “a big step towards reconnecting our people and economies”.

Before Covid-19, about 300,000 people streamed across the land border daily. Malaysians would typically travel south for manual labour in factories or to work as gardeners and security guards, while Singaporeans flocked the other way for bargain shopping trips, cheap fuel and cultural tours.

As many as 2,880 people a day will be allowed to travel between the countries in the initial phase of the causeway reopening. The quota will be reviewed weekly.

Initial priority will go to people who have been working in either country to visit their families, the Singapore government said. Travellers must be citizens, permanent residents or long-term pass holders of the nation they are entering. Eligibility will be expanded in time to include general travellers, depending on the Covid-19 situation.

“Many workers from both Singapore and Malaysia have not been able to see their families for many months,” Gan said. “We seek the understanding of workers who may not be able to purchase a bus ticket to travel home immediately due to limited capacity.”

Both sides will work to restore travel on the Tuas Second Link, another land connection, Singapore said.

Land links are key for the supply of goods. The Singapore government maintained the flow of essential products during the border shutdown via air and limited shipments over the causeways.

Singapore and Malaysia agreed earlier this month to open an travel lane between Changi Airport and Kuala Lumpur on November 29 for vaccinated passengers. Singapore is allowing quarantine-free visits from almost two dozen countries and Malaysia is gradually following suit after placing strict limits on movement early in the pandemic.

Singapore was Malaysia’s biggest source of visitors in 2019 with about 10-million arrivals, according to the ministry of tourism, arts & culture. That number fell to 1.5-million in 2020, primarily made up of visitors in the first couple of months of the year before lockdowns. Singaporean tourists also bring in the most money, spending about 20.5-billion ringgit — equal to about $4.9bn — in 2019.

In addition to trips by workers to Singapore, about 1.2-million Malaysian tourists travelled there in 2019, a figure that dropped to 153,650 last year, according to the Singapore Tourism Board. Singapore-Kuala Lumpur was the world’s second-busiest international route in 2019, data from flight-tracking firm OAG show.

Bus operator Transtar Travel will operate 32 daily designated trips (16 trips each from Malaysia to Singapore, and from Singapore to Malaysia) between the Woodlands Temporary Bus Interchange in Singapore and Larkin Sentral Bus Terminal in Johor Bahru, according to Wednesday’s announcement.

Handal Indah will similarly operate 32 daily trips between Larkin Sentral Bus Terminal in Johor Bahru and Queen Street Terminal in Singapore. The maximum capacity for each designated bus will be 45 fully seated passengers per trip.