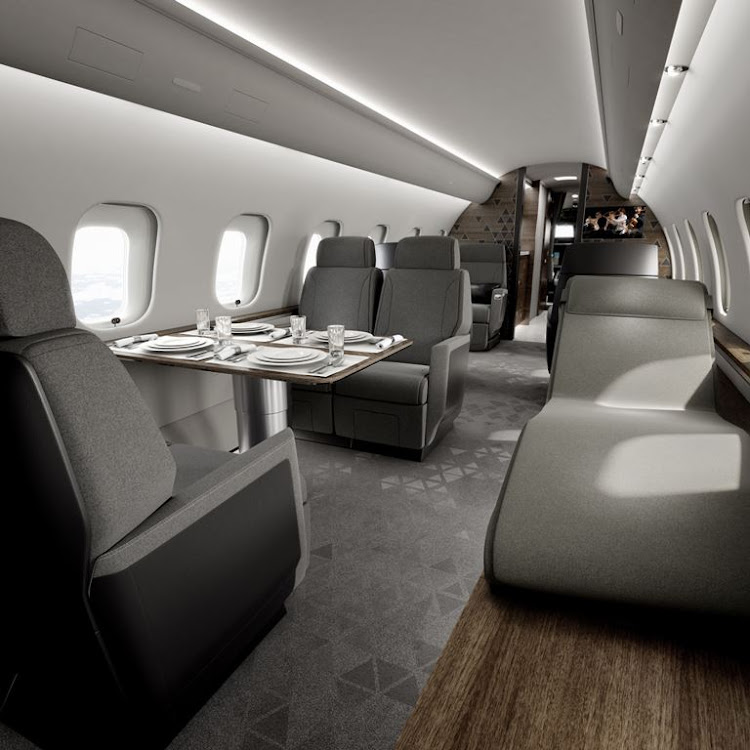 The interior of the Bombardier Global 5500 business jet. Picture: BLOOMBERG

Bombardier’s Global 5500 has a top speed of 956km/h and can fly nonstop from Los Angeles to Moscow. Available for about $45m, the twin-engined jet can easily touch down on tricky airfields and accommodate about a dozen passengers.

Michael Spencer, the billionaire NEX Group founder, got one this year. He is one of the lucky few to snag a new jet as private aircraft makers strain to keep up with record demand from the burgeoning ranks of the ultrarich.

“The market is in a position where it has never been before,” said Christopher Marich, cofounder of MySky, an online management platform for jet owners. “For every aircraft out there, there’s two or three buyers for popular models.”

Representatives for Spencer did not respond to requests for comment.

The hunger for pricey jets is just the latest example of the booming billionaires economy, in which demand for mansions, boats and many collectibles has surpassed pre-Covid-19 levels.

The number of superyachts sold this year to mid-October increased about 60% to 523 from the same period last year, according to research from SuperYacht Times. More than a quarter of those purchases were for new vessels.

“The world’s truly wealthy seem to be travelling again and wanting to do things,” said Paul Welch, founder of MillionPlus.com, an online marketplace for luxury property, yachts and jets. “I’ve got people buying real estate in London from Indonesia, Canada and Hong Kong.”

Few areas though are showing such strong demand as new private aircraft, driven partly by Covid-19.

Among those splurging are the billionaires behind London-based chemicals giant Ineos, Jim Ratcliffe, Andy Currie and John Reece. They have bought at least two Gulfstream jets and an Airbus SE helicopter between them since the start of 2020 through companies they control, regulatory filings show. The executives’ firms are now registered owners of more than a half-dozen aircraft including a new Gulfstream G600 that typically has a list price of about $55m.

An Ineos spokesperson said the closely held company’s aircraft has been vital to help senior management do essential travel during the pandemic, adding that the firm tries to conduct business virtually wherever it can.

While the pandemic itself has fuelled interest in minimal-contact travel and leisure, the main engine of the craze for extravagant toys is surging wealth. The world’s 500 richest people added $1.2-trillion to their fortunes this year to October, according to the Bloomberg Billionaires index, powered by booming stock markets and central banks flooding economies with new money.

Despite the Covid-19 pandemic, demand for extravagantly high-end yachts from the world’s richest people has outstripped supply
Life
1 year ago

With interest rates hovering near record lows, the ultrarich are also frequently turning to credit to fund purchases.

Morgan Stanley, Bank of America and JPMorgan are among the banks that reported jumps this year in the value of asset-backed loans they have extended to clients. The loans, usually borrowed against homes or stakes in public or private companies, provide the wealthy with cash to pay for their lifestyles without having to sell assets.

Lending balances at UBS’s US wealth-management business grew to $87.5bn in the third quarter, a 27% increase from a year earlier. Niche lenders are experiencing the uptick too. Vivek Kaushal, CEO of aircraft-finance specialist Global Jet Capital, said his business is poised to exceed prepandemic levels as demand for financing rises.

“The whole market is growing,” he said.

In the US, the private jet industry’s biggest market, tax incentives, have also driven demand. The nation’s 2017 tax bill allowed buyers to write off the full amount of their new aircraft’s cost on their federal tax returns, making a private jet affordable for more wealthy Americans.

The number of private flights departing this year to mid-October from Teterboro Airport in New Jersey, the country’s busiest private jet hub, was up 61% from a year earlier, according to aviation data company WingX.

In Europe and Asia, demand for private aviation is picking up as more nations reopen borders. Worldwide, private jet travel was 19% higher last month compared with October 2019, according to WingX, putting the industry on track for its busiest year ever.

Still, there are mounting indicators that the boom times for billionaires may be peaking. Popular discontent with widening wealth gaps has emboldened legislators worldwide to hike taxes on the wealthy, though a proposal for a “billionaire’s tax” in the US was short-lived.

Interest rates are beginning to rise, and China has put its richest citizens on notice with its “common prosperity” push to reverse inequality, evidenced in authorities’ pressuring of China Evergrande chair Hui Ka Yan to dip into his own pocket to stave off default at the embattled property developer.

The upswing in private jet travel has also coincided with heightened awareness about the aircrafts’ inordinately large carbon footprint per passenger. Greenhouse-gas emissions from private jets are rising faster than those from commercial jetliners, according to research published this year by Brussels-based campaign group Transport & Environment.

Private aviation firms offer carbon offsetting programmes to combat concerns over emissions, with some aiming to be carbon-neutral this decade. Private jets account for about 2% of the total greenhouse gases generated by air travel, but their levels are set to rise as the growing ranks of the superaffluent increasingly embrace flying private.

World’s superyachts set up a Covid Club Med around Italy

From cannabis buffets to choppered-in caviar, posh charter life can be a rough — albeit rewarding — ride for the crew
Life
9 months ago
Next Article

Hollywood is finally presenting a girl with a gun

Hollywood is finally presenting a girl with a gun