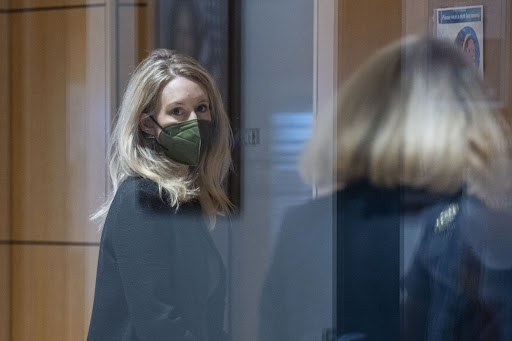 Elizabeth Holmes took to the witness box this week, seeking to show she was a healthcare pioneer who couldn’t possibly have had the intent to deceive patients and investors.

Starting with photographs displaying the insides of her blood-testing analyser, the Theranos founder on Monday put forward the narrative of a CEO who was operating at a high level, focused on the big-picture demands of driving a cutting-edge company to success.

The goal is to give the jury in her criminal fraud trial an entirely new notion of who she is, after 10 weeks of the government laying out its case with witnesses who depicted Holmes as deeply deceptive. In her initial hour-long testimony on Friday, the 37-year-old discussed the youth and idealism required to get Theranos started. On Monday,  she spent hours delving into contracts with giant pharmaceutical companies that she signed just five years later. Tuesday was her third day of testimony.

“We thought this was a really big idea because these robots used in the traditional lab had not been miniaturised,” Holmes testified Monday. She explained how Theranos had overcome the failures in a presentation for Novartis to build a new 3.0 version of its blood-testing machine that removed human error in traditional analysers. “Human processing would not be required in the same way with this device.”

Holmes is off to a good start, said Andrey Spektor, a former federal prosecutor and criminal defence lawyer at Bryan Cave Leighton Paisner in New York.

“The defence has three general goals in mind for Ms Holmes’ testimony: Humanise her, question evidence of knowledge and intent and shake the jury’s confidence in some of the government’s witnesses,” he said in an email. “They have already achieved some success with all three.”

But by the time prosecutors start questioning Holmes, they may seek to characterise the picture of her as an innovative and hard-charging entrepreneur as less than candid.

In her discussion of two big milestones in the early years of Theranos — her efforts to collaborate with the military and big pharmaceutical companies — Holmes steered clear of what the government contends are glaring lies.

She told jurors that Theranos made contact with the department of defence in 2008 and 2009 for various projects, including one to determine “whether there were markers in the blood that could predict PTSD”, an acronym for post-traumatic stress disorder.

While Holmes acknowledged her goal to arrive at a defence department contract was unsuccessful, she didn’t address prosecutors’ allegations that she falsely represented to investors and business partners that Theranos technology was deployed in helicopters and on the battlefield.

Likewise, Holmes offered a blow-by-blow account of her work with various drug giants, including some documentation of Theranos’s communication with companies including GlaxoSmithKline, Celgene and Bristol-Myers Squibb.

Her attorney, Kevin Downey, asked her about communications with the Mayo Clinic. “Did you believe this was a validation of Theranos’s technology?” he asked his client. “I did,” Holmes replied.

The lawyer also showed the jury emails between Holmes and at least one Pfizer executive as recently as 2015 to demonstrate that Holmes was of the belief she had an ongoing relationship with the company.

But her testimony didn’t touch the government’s claim that years earlier, when Pfizer and Schering-Plough refused to endorse her technology, Theranos resorted to misappropriating the letterhead logos of those companies and issuing fabricated reports to prospective investors.

Holmes’s anecdote about learning from the failed Novartis demonstration made no mention of the version of events laid out in journalist John Carreyrou’s book,  Bad Blood: Secrets and Lies in a Silicon Valley Startup. Carreyrou wrote that the CFO of Theranos was fired after he confronted Holmes in late 2006 upon learning that the demonstration in front of the Swiss drug company had involved a pre-recorded test result that wasn’t disclosed to Novartis.

Near the end of her testimony on Monday, Holmes was asked by Downey if Theranos scientists told her the company’s machines could run a full range of blood tests. It was an attempt to diffuse a key government allegation that Holmes promoted Theranos as being able to run hundreds, even thousands, of blood tests on a tiny amount of blood even though she knew it could only accurately perform 12.

Holmes said a 2010 email from one of the company’s early lead scientists, Ian Gibbons, conveyed “our ability to expand the existing capabilities” and tests running on the company’s platform.

It’s an example of how Holmes can point to other employees to say their opinions informed hers — and convince the jury she sincerely believed her company was going places until it eventually collapsed in 2018. But it also flies in the face of government evidence that she intentionally and repeatedly exaggerated her technology’s capabilities.

“There is no doubt Theranos claimed things that were not true, but how much did Ms Holmes know?” Spektor said. “Her testimony is the best evidence of that critical element, and if the jurors think she is lying to them, they will convict her.”

The founder of health-tech company Theranos is now on trial for fraud in the US. Her story has interesting parallels with that of another start-up ...
Features
7 months ago

US prosecutors lay out case against Theranos founder Elizabeth Holmes

In opening statements in high-drama trial, prosecutors accuse Holmes of ‘lying and cheating’ while defence says she broke no laws
World
8 months ago