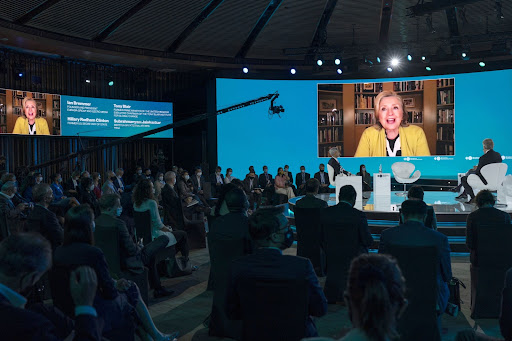 The future of the relationship between the US and China dominated discussions at the Bloomberg New Economy Forum in Singapore last week after a summit between President Joe Biden and Chinese leader Xi Jinping. Picture: BLOOMBERG

The future of the US-China relationship dominated three days of discussions at the Bloomberg New Economy Forum (NEF), which took place in Singapore last week after a crucial summit between President Joe Biden and Chinese leader Xi Jinping.

Reverberations from the Xi-Biden meeting continued through to the final day of the summit on Friday, with former secretary of state Hillary Clinton predicting that the Biden administration will remove some punitive tariffs on China, and saying she is aware of a review under way. Some of the tariffs imposed under former president Donald Trump “hurt” the US, particularly those on agricultural goods, she said.

The need for broader co-operation was also highlighted by US climate envoy John Kerry, who hailed the recent pact with China at COP26 as “significant” and said the US will help China transition away from coal.

The forum began on Wednesday with a keynote address from Chinese vice-president Wang Qishan, technically Xi’s second-in-command, who said China and the world must work together to boost global economic growth and vowed that Beijing will continue opening up more to foreign investment.

Signs of lingering geopolitical tensions remain. The US intends to initiate a new economic framework for the Indo-Pacific in 2022, commerce secretary Gina Raimondo said, as the Biden administration aims to reinvigorate America’s standing in the region. Tensions over Taiwan risk leading to a miscalculation between the US and China as both nations step up activity around the island, Singapore Prime Minister Lee Hsien Loong warned in an interview.

Still, influential former US secretary of state Henry Kissinger described the Xi-Biden meeting as a “good beginning” to avoid a broader conflict. “They now have to be followed by concrete discussions that lead in a direction both presidents have affirmed they want to pursue,” the influential US diplomat and author said via video.

Here are other subjects that were widely discussed at the NEF:

The NEF’s host city held the event despite widespread curbs in Singapore and the broader region as the pandemic continues to spread. Social-distancing rules were enforced broadly to ensure safety. Singapore’s game plan for reopening amid Covid-19 remains “step by step”, Prime Minister Lee said.

Singapore officials still need “a few more days” before they can decide whether to relax strict virus curbs that have lasted for nearly two months, Gan Kim Yong, Singapore’s trade minister, said on the last day of the forum.

But Covid-19 deaths and infection rates may dip below seasonal flu levels by the middle of 2022 if new dangerous variants don’t emerge in the meantime, philanthropist Bill Gates said.

Between natural and vaccine immunity and emerging oral treatments, “the death rate and the disease rate ought to be coming down pretty dramatically”, he said.

To better prepare for pandemics, several thousand experts at the World Health Organization level could be deployed to spot and fight infectious diseases, Gates said.

Much of the risk of future pandemics comes from sub-Saharan Africa, Gates said. Any surveillance system should be able to function even when governments are dysfunctional or uninterested in sharing information, he said, adding that the world also needs to build capacity to develop vaccines and antivirals faster.

Executives also talked about the health-care challenges that have emerged during the pandemic. The pace of approvals for Covid-19 diagnostic tests has been limited by the scale of the applicants compared with a limited number of staff qualified to review them, according to Roche Pharmaceuticals CEO Bill Anderson.

Goldman Sachs Group CEO David Solomon warned that markets could face a rocky time ahead as the global economy seeks to emerge from the abrupt effect of the pandemic.

“When I step back and think about my 40-year career, there have been periods when greed has far outpaced fear — we are in one of those periods of time,” Solomon said.

“Let’s remember inflation is at a 31-year high, at least the data that came out of the US, and it’s clearly going to remain high for the foreseeable future,” he said.

Nations need to focus on effective climate financing for the developing world to maintain momentum after the Glasgow talks, said the co-operation minister of Egypt, which is scheduled to host COP27 in November 2022.

“To move forward and achieve the targets we need the fuel, and that fuel is the money,” minister for international co-operation Rania Al-Mashat told the forum.

The world has “completely pivoted” to the need to tackle climate change, according to Sunil Mittal, the billionaire chair of Bharti Airtel. Mittal said he will fly back to a Delhi that is “covered in smog”.

“We can’t live like this,” Mittal said. “We talk about 5-million people dying of the pandemic; we don’t talk about how many people have been choked around the world.”

As if rising sea levels and fiercer storms are not enough to worry about, the climate crisis is already cutting crop yields and could lead to widespread food shortages, according to the UN, which cautions that farmers won’t meet a projected 50% increase in food demand by 2050 if greenhouse gas emissions stay high.

In a special episode of Stephanomics, Stephanie Flanders tackles how to feed almost 10-billion people, the projected population of the planet in three decades. She turned to four leaders in global agriculture at the forum for their insight.

Food prices are likely to stay elevated in 2022 as disruptions to the global supply chain are set to persist, according to the head of Cargill, who highlighted labour shortages as one of the biggest risks facing the industry.

Soaring food costs and unprecedented shocks in the global supply chain are warnings that the world needs to focus on building more resilient food systems, according to Sara Menker, CEO and founder of Gro Intelligence, which provides analysis on global agriculture data.

Lockdowns have not been too bad for LVMH’s wines and spirits business, with Moet Hennessy CEO Philippe Schaus saying that 2021’s results should beat 2019’s.

Bayer will continue to run its three main business units under one roof, even as investor interest in the potential for splits among large diversified companies has intensified.

“We are going to continue the course, which is developing our company along the three pillars that we have — pharmaceuticals, crop science and consumer health,” CEO Werner Baumann said.

While many other technology giants embrace the metaverse as the next frontier of growth, Alphabet CEO Sundar Pichai sees Google’s future in its oldest offering: internet search.

“I feel fortunate our mission is timeless,” he said. “There’s more need to organise information than ever before.”

MPHO MAKWANA: The importance of purpose-led systemic thinking for effective ...

MPHO MAKWANA: The importance of purpose-led systemic thinking for effective ...