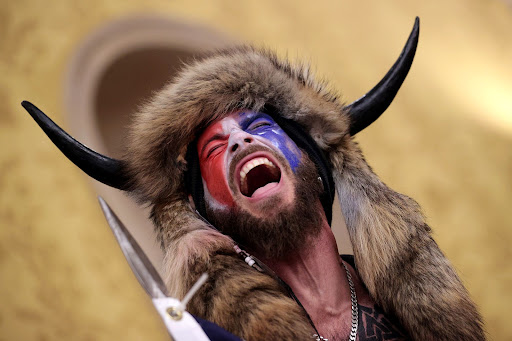 Jacob Chansley was sentenced to more than three years in prison. Picture: BLOOMBERG

Jacob Chansley, the self-proclaimed “QAnon shaman” who wore a coyote-skin headdress into the Senate chamber, was on Wednesday sentenced to more than three years in prison for his role in the January 6 Capitol riot.

Chansley, 34, was sentenced on Wednesday to 41 months by US district judge Royce Lamberth in Washington. Though less than the 51 months federal prosecutors had requested, the punishment was still one of the stiffest handed down yet to a participant in the Capitol siege.

“What you did here was horrific,” the judge said in imposing sentence.

Filmed shirtless and carrying an American flag through the Capitol, Chansley quickly became one of the most recognisable symbols of the insurrection. The Donald Trump supporter left a handwritten note on a dais that then vice-president Mike Pence had vacated as the riot unfolded. “It’s only a matter of time,” the note said. “Justice is coming!”

Chansley, who pleaded guilty in September to obstructing an official proceeding, has been in custody since shortly after the riot. His lawyer, Albert Watkins, had asked that his client be given no additional jail time.

Addressing the court before his sentencing, Chansley gave a long, rambling statement in which he expressed contrition for his “indefensible” January 6 actions, recounted his work with abused children and spoke of his love of Jesus and Gandhi.

“I am in no way, shape or form a dangerous criminal,” he said. “I am not a violent man, I am not an insurrectionist, I am not a domestic terrorist. I’m a good man who broke the law, and I’m doing all I can to take responsibility for that.”

Lamberth praised Chansley for his contrition, comparing his remarks “to the kinds of things Martin Luther King would’ve said.” But he said Chansley’s conduct still merited a lengthy sentence.

Until last week, the longest sentence given to a Capitol rioter was eight months, with some receiving only probation. But prosecutors are now turning to rioters accused of more serious crimes. Last week, Scott Fairlamb, the first rioter to plead guilty to attacking a police officer at the Capitol, also received a 41-month prison term.

At Wednesday’s sentencing hearing, federal prosecutor Kimberly Paschall characterised the note Chansley left for Pence as “a threat”, pointing out that the vice-president was still under protection in the Capitol at the time.

“Those words hit differently knowing that he is not across the country,” she said, “he is not hours away, he is minutes away. He is not miles away, he is not a plane ride away, he is feet away from the object of his contempt.”

At the sentencing on Wednesday, Watkins said his client never intended to hurt anybody at the Capitol and sought to distinguish him from other rioters who came prepared for confrontation.

“He wasn’t violent, he wasn’t destructive, he wasn’t a planner, he wasn’t an organiser,” Watkins said at the hearing. The lawyer also said Chansley had struggled with mental-health issues for 15 years.

In his sentencing memo, Watkins said Chansley has suffered in prison, experiencing panic attacks and claustrophobia.

In the months since the riot, federal prosecutors have brought charges against about 650 people. So far, at least 90 have pleaded guilty to misdemeanour charges, and at least 15 to felony charges, according to court papers.

‘We’re taking down the Biden regime,’ Steve Bannon says as he hands himself over to FBI
World
2 weeks ago

Four-star general Powell, who was the most popular political figure in the US, turned his back on Donald Trump’s Republicans
Opinion
1 month ago