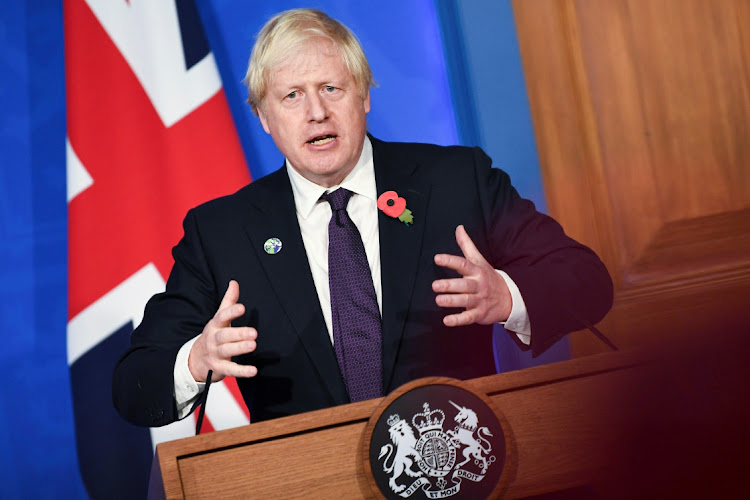 UK Prime Minister Boris Johnson said on Sunday the agreement reached at global climate talks in Glasgow will be pivotal in the fight to stop global warming.

The UN Climate Change Conference (COP26), hosted by the UK, produced a “game-changing agreement that the world needed to see”, Johnson said at a press conference in London.

Negotiators from almost 200 countries clinched a deal that broke new ground in the fight against climate change, but pushed the hardest decisions into the future.​​

While the UK leader said he was “immensely proud” of what had been achieved, he acknowledged that his joy was “tinged with disappointment” over successful efforts by some of the world’s largest emitters of greenhouse gases to water down the language in the agreement.

It was called a ‘historic' deal while many expressed disappointment at last-minute changes. So, what was actually achieved at COP26?

“We can lobby, we can cajole, we can encourage, but we cannot force sovereign nations to do what they do not wish to do,” Johnson said.

​​After two weeks of often fraught COP26 talks, delegates agreed to reduce the use of coal, end “inefficient” fossil-fuel subsidies and boost their climate targets sooner. But the language that called for the phase-out of coal was changed at the last minute to call for the phase-down of the fuel.

“It’s beyond question that Glasgow has sounded the death knell for coal power,” he said.  “Whether the language is phase down or phase out doesn’t seem to me, as a speaker of English, to make that much of a difference — the direction of travel is pretty much the same,” Johnson said.

We asked nations to come together for our planet at @COP26, and they have answered that call. I want to thank the leaders, negotiators and campaigners who made this pact happen – and the people of Glasgow who welcomed them with open arms. 1/4

The Glasgow Climate Pact puts the world, barely, on a path to limit the rise in global temperatures to 1.5°C from pre-industrial times — the goal of the Paris Agreement and the level scientists say is needed to avoid catastrophic warming.

“This is the beginning of that 10-year sprint,” said John Kerry, the US climate envoy. “We are in fact closer than we have ever been before to avoiding climate chaos and securing cleaner air, safer water and a healthier planet.”

The accord came despite the last-minute objections from China and India, two of the world’s largest emitters, behind the  watered down language on coal.

The Glasgow agreement was a more ambitious deal than many veteran COP observers had expected, with the coal commitment in particular held up as an important breakthrough.

But it rests on the huge assumption that the biggest polluters — especially China, the US and India — will follow through on their promises to zero out their emissions over the next decades. Reaching carbon neutrality will require trillions of dollars of investment in clean energy and stronger restrictions on fossil-fuel activities including combustion engine cars and polluting factories.

The accord was also criticised for not doing enough to raise financial support from rich countries to help developing nations transition to clean energy and prepare for more extreme weather. They also warned that concessions on carbon market rules could set back efforts to cut emissions of planet-warming greenhouse gases.

UN climate agreements are, by their nature, messy compromises as they have to balance out the competing interests of more than 190 countries. In the final hours, countries including low-lying island nations like Maldives and carbon powers like the US complained that it didn’t go far enough.

Delegates also expressed anger that India was allowed to alter the final draft.  While the South Asian nation took the fall for watering down the text, its public objection concealed the role of China and even the US in the weakened outcome, according to people familiar with the discussions.

While that may seem like a small tweak, European countries warned that it would make it harder to meet the 1.5°C limit. “The longer you take to get rid of coal, the more burden you put on the natural environment,” said Frans Timmermans, the EU’s climate chief. “The more burden you put on your economy because coal is simply not a smart economic proposition either.”

Many were unhappy with the final text. But eventually countries agreed to a compromise as the clock ticked down and protesters outside the venue demanded they take action to stem warming that’s already led to floods, heatwaves and rising sea levels.

There was particular pressure to reach an agreement on carbon market rules as the private market outside the UN’s control booms, fuelling worries about free-for-all trading that could facilitate greenwashing. Demand is forecast to grow to $100bn by the end of the decade as more companies set net-zero goals, but its effectiveness as a climate solution hinges on setting high standards. 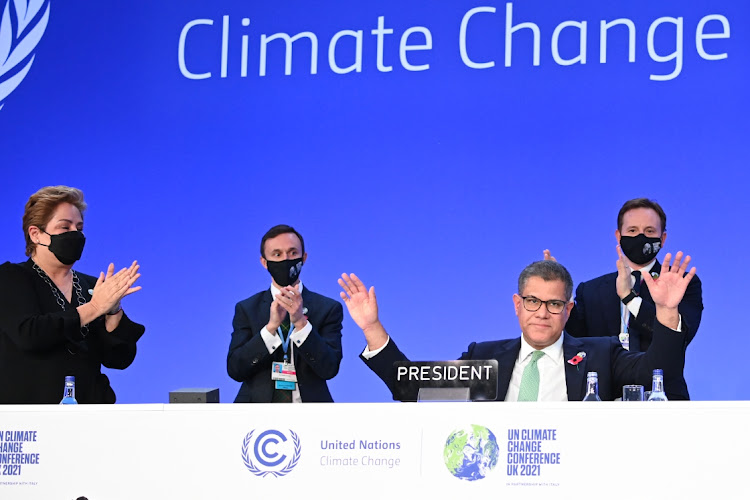 The documents were approved to cheers and high-fives on Saturday evening even as COP26 president Alok Sharma expressed regret about how the last-minute haggling had been conducted in small huddles that excluded most countries.

“I apologise for the way this process has unfolded, and I am deeply sorry,” he said, close to tears. “I also understand the deep disappointment, but as you have already noted it’s also vital that we protect this package.”

Getting all countries in the world to agree on how to halve emissions this decade — what’s needed to reach 1.5°C — was always going to be impossible to achieve at a single global summit. The Glasgow pact, like its Paris predecessor, is non-binding and nothing in the text directly compels countries to implement specific policies.

That said, landmark climate accords can send important market signals and reshape economies. Since governments agreed to the landmark Paris accord of 2015, more than $2.2-trillion has poured into solar, wind, batteries and other renewable technologies, according to BloombergNEF.

“Glasgow has been an important gateway to a 1.5°C world but we now need accelerated action to get there,” said Emily Shuckburgh, director of research centre Cambridge Zero. “COP26 ends reaffirming the fact that the science of climate change is crystal clear — we are running out of time.”

Authors argue he would push for regulation to accelerate transition to low-carbon economy.
News
8 months ago