The talks come as tensions between the two superpowers are building 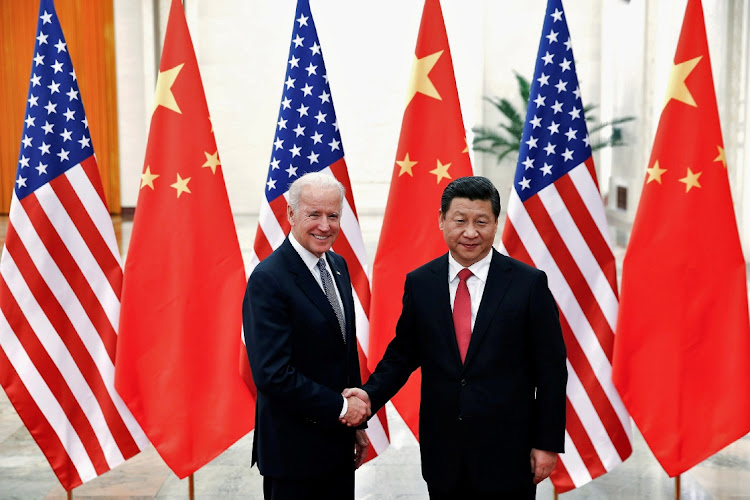 Chinese president Xi Jinping, right, shakes hands with US president Joe Biden inside the Great Hall of the People in Beijing in this December 4 2013 file photo. Picture: REUTERS/LINTAO ZHANG

US president Joe Biden will meet virtually with Chinese president Xi Jinping on Monday in a discussion designed to prevent a misunderstanding that could lead the rivals to a military conflict, a senior US administration official said.

While the summit comes at a time of high stakes in the relationship of the two countries, the Biden administration has continuously sought to downplay expectations for the meeting by stressing that the US won’t ask for specific outcomes.

The talks come as tensions between the US and China have been building over issues including Taiwan and restrictions on sales of US technology to China. The Biden administration has elevated the discussions to the two presidents after months of lower-level talks proved unsuccessful.

Biden and Xi have spoken on the phone twice this year, but this is the first time the conversation is being billed as a summit. The last US-China summit in 2019 produced a breakthrough in Donald Trump’s trade war right before the pandemic hit. US-China relations plunged soon afterward over a range of disputes including the origin of Covid-19, human rights in Hong Kong and Xinjiang, and national security threats posed by Chinese companies.

However, tensions eased a bit following a breakthrough on one key issue important to Beijing: the September release of Huawei Technologies chief financial officer Meng Wanzhou from extradition proceedings in Canada. The US had sought Meng’s extradition since the Trump administration and the issue became a major irritant in US-China ties.

Xi and Biden “will exchange views on China-US relations and issues of mutual interest” in the virtual meeting, Chinese foreign ministry spokeswoman Hua Chunying said in a statement.

China’s foreign minister Wang Yi spoke to his US counterpart Antony Blinken on Saturday, and urged both sides to prepare for a smooth meeting to ensure that relations are propelled back to a healthy level, according to a separate Chinese government statement.

Wang also reiterated to Blinken of China’s firm stance on Taiwan after recent US. comments on the matter. He urged the US to firmly object to any form of Taiwan independence and to not send wrong signals to parties that are supporting such moves.

On other topics, working groups set up by both sides have made some progress over the last month on minor issues in the relationship that have been lingering for months.

The virtual summit is set for Monday evening in Washington — Tuesday morning in Beijing — and the two sides are not expected to issue a joint statement after.

A main driver for the talks is the need for both sides to establish guardrails that ensure competition does not become conflict, according to the official. Biden will stress the need for such an approach in his conversation with Xi, though it’s not clear what specific measures he’ll seek.

A senior administration official said the US believes that when the terms of the relationship are established, vigorous competition can be sustained.

Special climate envoy John Kerry this week concluded an agreement with Beijing at the climate summit in Glasgow. The timing for the deal was not seen as linked to the upcoming summit between Biden and Xi.

US officials have long cited climate as an area of co-operation but stressed that any progress there could not be linked to other aspects of the bilateral relationship. While the joint climate statement is seen as a step forward, more work remains and Biden is expected to press Xi on that.

The two presidents will discuss issues of concern to the US, including Taiwan and China’s economic practices, though a discussion about lifting tariffs is not on the table.

The White House views the passage of the bipartisan infrastructure bill and recent international summits where the US re-engaged with allies as leverage for Biden going into the summit.

“Following their September 9 phone call, the two leaders will discuss ways to responsibly manage the competition between the United States and the PRC (People’s Republic of China), as well as ways to work together where our interests align,” White House press secretary Jen Psaki said in a statement o Friday. “Throughout, president Biden will make clear US intentions and priorities and be clear and candid about our concerns with the PRC.”

A leading concern for the US is the question of whether Xi would invade Taiwan, or possibly seek to take smaller islands controlled by Taiwan, a move that would be seen as a significant test of Western resolve.

General Mark Milley, chairman of the joint chiefs of staff, has said China is unlikely to take Taiwan by force within the next 24 months. And China’s state media have sought to quiet online speculation that a conflict with Taiwan may be imminent.