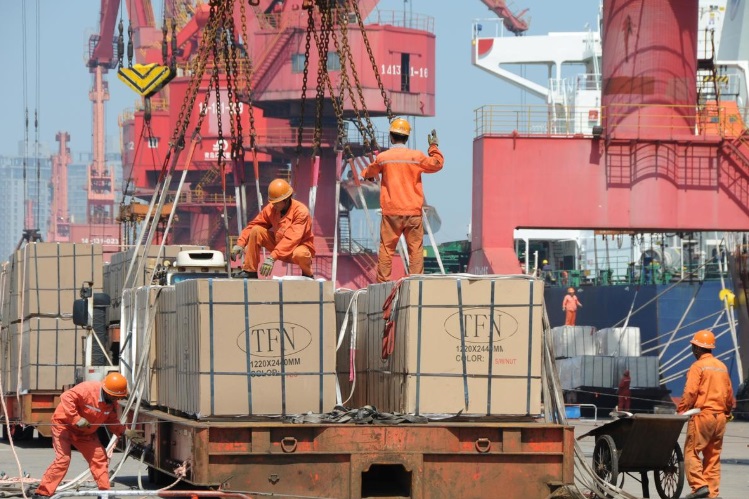 Workers load goods for export onto a crane at a port in Lianyungang, Jiangsu province, China. Picture: REUTERS/SRINGER

Exports rose 27.1% in dollar terms in October from a year earlier to $300.2bn, data from the General Administration of Customs showed on Sunday. That was the 13th straight month of double-digit growth and exceeded economists’ expectations of a 22.8% gain. Imports increased 20.6%, leaving a trade surplus of $84.54bn.

China’s trade growth has remained well above pre-pandemic levels all year. Its exports through October have already surpassed all of 2020.

The strong trade performance is providing support for a Chinese economy that has slowed sharply in recent months due to weak domestic demand caused by a real estate downturn, electricity shortages that have slowed industrial output, and weak consumer spending worsened by sporadic outbreaks of the coronavirus.

China’s coal imports almost doubled in October from a year earlier as Beijing scrambled to deal with power cuts caused by a shortage of the commodity and surging demand for electricity, especially from export-orientated manufacturers. Imports of natural gas, an alternative to electricity for heating homes, jumped 22% in the first 10 months of the year.

Global trade has been running at record levels this year as economies around the world recovered from virus-induced lockdowns in 2020. That has put strain on supply chains in many countries due to shortages of containers and ships as well as capacity at ports, including drivers who deliver goods to retailers.

But the outlook for the supply chain crisis may be improving, as foretold by falling shipping costs.

China’s exports to the EU and the US have grown fastest among its major trading partners this year, customs data showed. The nation’s trade surplus with the US, a source of trade tension between the world’s two largest economies, rose to 2.08-trillion yuan in the 10 months through October from 1.75-trillion yuan a year earlier, partly because Chinese imports of US soya beans slowed due to weather-related issues in recent months.

Machines and electrical products accounted for almost 60% of Chinese exports by value this year, the customs administration said. Labour-intensive products such as clothing and plastic products made up another 18%. Goods such as household appliances, lightings and furniture saw the fastest export growth in October, Goldman Sachs analysts said in a note.

China is the world’s largest source of demand for most commodities because of its industry and construction-heavy economy. Demand for construction-related goods has slowed this year due to the country’s property market downturn, with iron ore imports decreasing in volume terms in October.

Dollar inflows have supported China’s currency this year and added to the government’s reserves of foreign exchange, which rose to $3.22-trillion at the end of October, according to the People’s Bank of China. The dollars offer China an important cushion against any future shocks in the world economy, even as individual companies such as China Evergrande Group struggle to repay their debts.

The nation’s strong export momentum will last at least for the next few months, according to a Bloomberg Economics analysis. Demand for Chinese products could slow if consumers in developed economies continue to shift away from goods towards services consumption, and countries in south and Southeast Asia resume factory production after pandemic-related shutdowns.

The government in recent days has warned of “downward pressure” on the economy and vowed to introduce measures to boost domestic demand, including more supportive policies for small and medium-sized companies.

It has vowed not to use the property market to provide temporary stimulus, and the central bank has remained conservative, sticking to making short-term loans to keep interbank liquidity stable. Bank reserve requirements have been unchanged since July and policy interest rates have been steady since last year.

A study by international development research lab AidData shows the initiative has been hit by alleged corruption scandals or cancellations  in a ...
World
2 months ago

Retail sales and industrial production grew by 8.5% and 6.4%, respectively, in July from a year earlier, missing expectations
World
3 months ago
Next Article