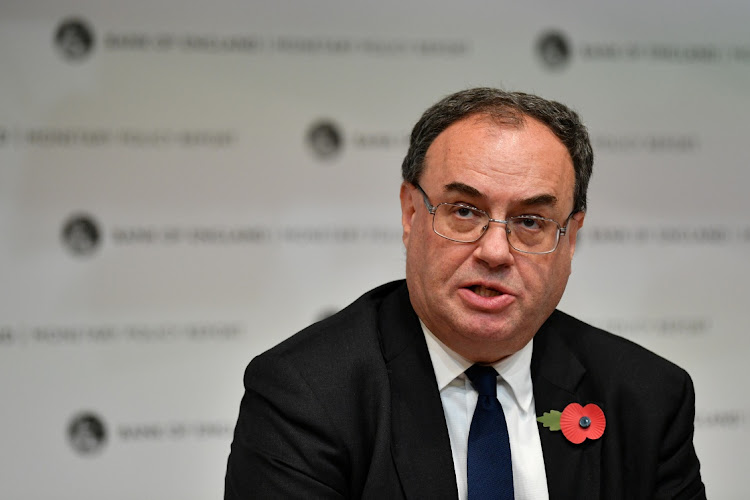 Bank of England (BOE) governor Andrew Bailey says it isn't his job to guide financial markets on interest rates, hitting back against criticism that he misled investors in the weeks leading to Thursday’s policy decision.

Speaking after officials defied market expectations by keeping borrowing costs unchanged on Thursday, Bailey told Bloomberg TV that his remarks on the need to curb inflation before the meeting were “conditional”.

“I don’t think it’s our job to steer markets day by day and week by week,” he said.

The comments will do little to ease criticism that Bailey’s decision not to push back against aggressive bets of tightening would undermine the central bank’s credibility.

Traders had expected the BOE to raise borrowing costs from 0.1% to 0.25% on Thursday. Some of the UK's commercial banks pulled their cheapest mortgage deals before the decision, hitting households directly.

“Communications and policy feed off each other. What the Bank does is very dependent on credibility,” said Andrew Sentance, a former BOE policymaker now at Cambridge Econometrics.

Only two of the nine rate-setters voted for an increase, with the governor himself voting to hold, despite the new forecasts showing inflation will hit 5%, more than double its target. Traders responded by slashing rate-hike bets, and sent the pound tumbling 1.4% against the dollar.

“Forward misguidance”, was how Rabobank described the BOE’s messaging after the decision, and Bob Stoutjesdik, a fund manager at Robeco Institutional Asset Management in Rotterdam, said Bailey “has a serious credibility problem”.

“When look you look at how markets respond today and how they have responded to the hawkish messages you can easily conclude that the BOE have seriously lost credibility, which I think is difficult to repair,” he said.

Bailey’s apparent U-turn invited comparisons with an “unreliable boyfriend”, a tag first applied to former governor Mark Carney after he signalled rate rises and changed his mind later. “It’s not compulsory for a BOE governor to be an unreliable boyfriend,” Bailey said.

He told Bloomberg TV that his pre-meeting comments were prompted by concern that falling bond yields could lead to a rise in inflationary pressures. He said the bets after his remarks were “in the right direction, overdone”.

ISAAH MHLANGA | The growth story Godongwana needs in his budget speech to be ...

ISAAH MHLANGA | The growth story Godongwana needs in his budget speech to be ...