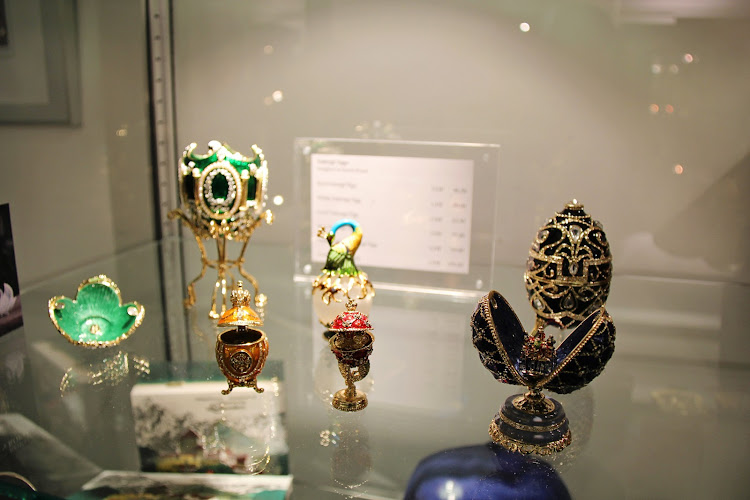 A collection in the Fabergé Egg Museum. Picture: 123RF/csiling1

About 60-odd years ago, after Josiane Woolf and her husband Harry visited his parents’ house, she made a resolution.

“I said, ‘You know, we have to find something to collect’,” Woolf says. “We can’t be like this when we’re old — it’s such a boring life to be sitting in front of the TV all day when you’re 70.”

At the time, the couple had modest ambitions. Harry, a pharmacist, was only on the cusp of building the London-based pharmaceutical chain Underwoods, and “we had no money”, Woolf says.

They also didn’t even know what they’d start to collect. Soon after, it was effectively decided for them.

“One day in 1972, we had a dinner in our first home, and a friend of ours who sold old watches produced a little silver Fabergé samovar,” she says. “And he said: ‘This is the first piece of your Fabergé collection.” The couple purchased it for £50 (now $779), and from that single object, one of the world’s most important private collections of Fabergé was born.

Over the next half-century, Harry became an expert. “He was just a born collector,” Woolf says. “He had such refined taste, and his collection was created with a passion. He just loved it.”

Even after he became ill, Harry continued to acquire objects. “He still had Christie’s and Sotheby’s come with pieces he wanted to see, five days before his death,” Woolf says. (He died just before Covid-19.)

The collection en masse represents one of the largest private collections of Fabergé to come to market in recent memory, says the London-based dealer Andre Ruzhnikov, who is affiliated with neither Christie’s nor the Woolf family.

“I can’t remember a collection like Harry Woolf’s hitting the market, other than the Forbes collection in 2004,” he says. “Every piece in his collection is unique in its own right, and the majority of the items is some really juicy, fabulous thing that stands out.”

Items from the House of Fabergé, the official goldsmith of the Russian tsars from the mid-1880s until the revolution in 1917, had always been collected by a niche group of wealthy people around the globe.

Best known for its lavish Imperial Easter eggs, which the Russian royal family exchanged as gifts, Fabergé also produced vast quantities of finely wrought decorative objects ranging from clocks to figurines, letter openers, and tiaras. These pieces were collected by the aristocracy of Europe — one of the largest private collections of Fabergé is owned by the UK’s Royal Collection — as well as by the merely wealthy.

After the revolution, the Soviets sold large quantities of Fabergé objects they’d taken from the royal family and Russian aristocrats.

“There were a number of organised auction sales, but they also sold a lot of pieces privately,” says Mark Schaffer, a director of New York’s A La Vieille Russie, which specialises in Fabergé. “There were a few major players who bought pieces from the Soviets and then sold them in the West; one of those people was my grandfather.”

Fabergé was still desirable, Schaffer continues, “but it was more accessible. There were times when we had several Imperial eggs in our shop window.”

This was still the status quo when the Woolfs began to collect. “Fabergé wasn’t that renowned,” Woolf says, “and we could have them pretty inexpensively.”

By the 1980s, a series of influential exhibitions had caused a resurgence in Fabergé’s popularity, “then the market plateaued for a while,” Schaffer says. After the fall of the Soviet Union, he continues, “it took a few years, but then prices took off again.”

At roughly the same time Harry Woolf sold Underwoods to Boots.  Suddenly, the couple was able to expand their scope of acquisitions.

“As we had more money, we bought nicer and bigger pieces,” Woolf says. “But he always loved the animals — if a good animal came around, he’d always try to buy it.”

At first, the couple displayed the collection on their piano, Woolf says, but eventually, “they became too precious,” and the objects were put away.

Instead, they lent pieces to museum exhibitions around the world.

“Harry was a known collector,” says Schaffer. “He lent very generously to a number of exhibitions over the years, including ones that we held.”

Since Harry's death, Woolf has continued to lend. Fourteen of her pieces are set to be exhibited at the Victoria and Albert Museum in the forthcoming exhibition, Fabergé in London: Romance to Revolution, which will open on November 20.

The very peak of the Fabergé market is represented by Imperial Eggs. The majority of the 42 extant eggs are in public collections; the largest private collection of eggs belongs to the Russian billionaire Viktor Vekselberg.

Woolf says that she and Harry never even tried to collect the eggs; they focused on animals, photo frames, and whimsical objects such as a jewelled, gold-mounted nephrite cane handle in the shape of a snake and an extremely rare study of wild strawberries.

While the sheer scope of the collection is impressive, “I don’t think it’s a numbers game,” Schaffer says. “In any field, you could have a huge collection of mediocre pieces, but that’s not what this is.”

Instead, he says, “it’s got lots of interesting types of well thought-out objects. It’s a collector’s collection.”

Harry Woolf was known as a “stickler for condition,” Ruzhnikov says.

The group of works on offer is “definitely one of the best that maybe — or could have been — on the market. The British queen will never sell, the Kremlin will never sell. So if we forget the eggs, then this collection is as good as they come.”

Woolf hasn’t lost sight of the original reason they began to collect. “It kept us very busy,” she says.

Far from a mere hobby though, Woolf says it became one of the defining pursuits of her husband’s life.

“I thought, ‘Let’s just sell some of it.’ It would be a nice memory of Harry so that people remember him for his Fabergé. That was his big passion.”

Faberge-owner Gemfields's share initially fell 32% as news that Zambian tax authorities cleared its Kagem mine of claims of evasions failed to cheer ...
Companies
2 years ago