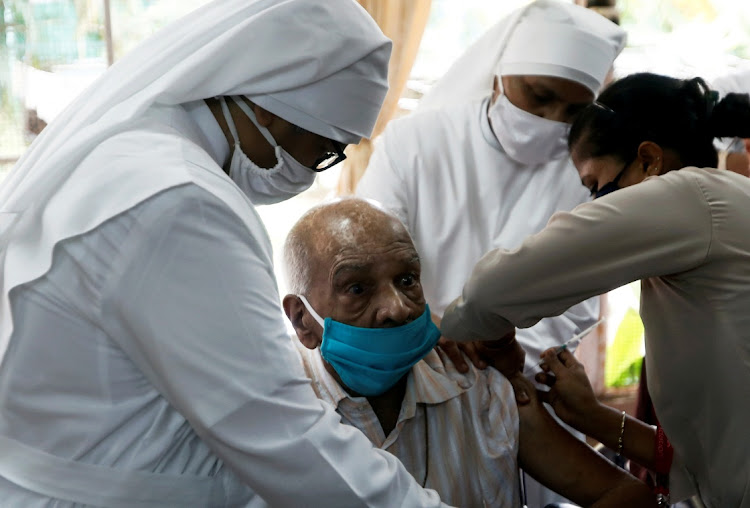 Nuns hold an elderly man as he receives a dose of Covaxin coronavirus disease (Covid-19) vaccine manufactured by Bharat Biotech, at a home for elderly in Mumbai, India, on August, 2 2021. Picture: REUTERS/FRANCIS MASCARENHAS

The World Health Organization (WHO) granted emergency authorisation to a Covid-19 vaccine co-developed by India’s medical-research agency and local manufacturer Bharat Biotech International, ending a months-long wait that added to controversy around the home-grown shot.

The WHO approved the vaccine’s use in people aged 18 and older on a two-dose schedule with four weeks between shots, according to a statement on Wednesday.

Covaxin joins a range of WHO emergency-cleared shots from AstraZeneca, China’s Sinopharm Grou  and Sinovac Biotech, Pfizer and BioNTech, Johnson & Johnson and Moderna.

The agency’s nod on the eve of Diwali, India’s largest festival, is a welcome endorsement for Covaxin’s manufacturer Bharat Biotech International, as well as a political boon for Prime Minister Narendra Modi, whose government had heavily promoted the vaccine.

The Hyderabad-based company has been beset with problems since it partnered with the state-funded Indian Council of Medical Research in 2020 to develop the inoculation. Covaxin has been criticised from the onset.

The vaccine won emergency approval from the nation’s drug regulator in January before clearing final-stage clinical tests, fuelling hesitancy around the shot and the early stages of India’s immunisation drive.

More than 100-million doses have since been administered across India. Bharat Biotech said in July that the vaccine was 77.8% effective in preventing symptomatic Covid-19, but that phase 3 data was yet to be peer reviewed. In the course of its analysis, the WHO repeatedly asked the company for further information, delaying its addition to the body’s pre-qualified list.

Bharat Biotech’s joint MD Suchitra Ella said in a statement the WHO nod was a “validation” of the company’s work, while Subrahmanyam Jaishankar, India’s foreign minister, said that “it facilitates travel for many Indian citizens and contributes to vaccine equity”.

The listing is a prerequisite for exports via the WHO-backed Covax vaccine-sharing facility, which was set up to provide Covid-19 shots to the world’s poorest countries. The WHO’s approval may accelerate the resumption of vaccine shipments from India, which halted exports in April to prioritise its own citizens amid a lethal second coronavirus wave.

The jab “is extremely suitable for low — and middle-income countries due to easy storage requirements”, the UN’s health agency said. Its advisers found it in October the show was  78% effective  after two doses spread over four weeks.

India will likely restart vaccine exports to Covax by early November, Adar Poonawalla, head of the Serum Institute of India, told Bloomberg News in October. Serum, the world’s largest vaccine maker, has pumped out hundreds of millions of doses of AstraZeneca’s inoculation and the company was meant to be the main provider of vaccines to Covax before the export halt.

Delivery by mouth would surmount some hurdles confronting Africa, such as the need to keep injectable shots refrigerated
National
6 months ago

Covid-19 leading cause of death in Discovery Life clients

BioNTech will initially build a production line with 50-million doses annual capacity, which could be also used for Covid-19 vaccines
Companies
6 months ago

The pharmaceutical production hub has scope to spawn an ecosystem of suppliers, says Ebrahim Patel
National
6 months ago 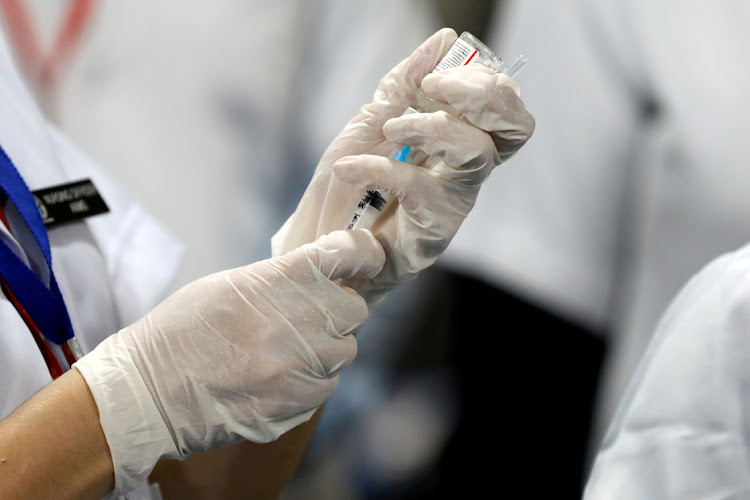 A healthcare worker fills a syringe with a dose of Bharat Biotech's Covid-19 vaccine, called Covaxin, at the All India Institute of Medical Sciences hospital in New Delhi, India, January 16 2021. Picture: ADNAN/ABIDI/REUTERS
Next Article