More than 450 firms representing $130-trillion of assets now belong to the Glasgow Financial Alliance for Net Zero, almost double the roughly $70-trillion when GFANZ was launched in April 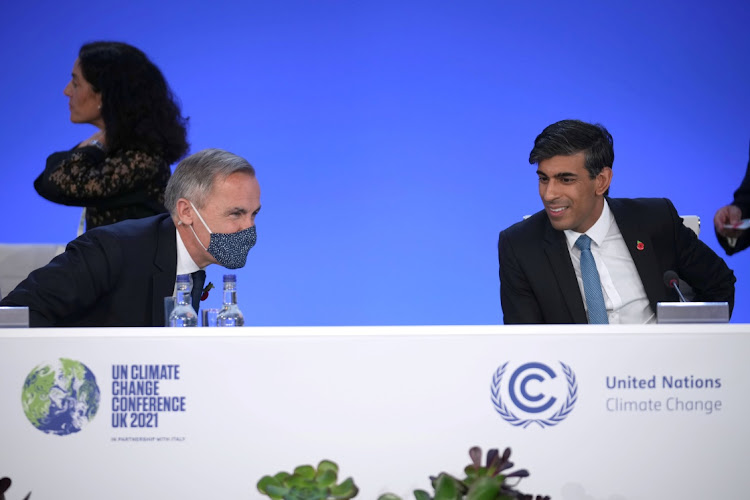 Banks and asset managers representing 40% of the world’s financial assets have now pledged to meet the goals set out in the Paris climate agreement, as an alliance championed by former central banker Mark Carney swells under the gaze of a world increasingly alarmed by planetary warming.

More than 450 firms representing $130-trillion of assets now belong to the Glasgow Financial Alliance for Net Zero, almost double the roughly $70-trillion when GFANZ was launched in April, according to a progress report published by the coalition on Wednesday. Signatories must commit to use science-based guidelines to reach net zero carbon emissions by mid-century, and to provide 2030 interim goals.

GFANZ was created in April. Convened by the UN, the alliance comprises six groups spanning all corners of the financial industry. On Wednesday, the group announced that Michael Bloomberg, the owner and founder of Bloomberg News parent Bloomberg LP, would co-chair GFANZ together with Carney.

In a joint op-ed on Wednesday, the two underscored the need for private-sector contributions if the world is to successfully fight climate change.

“Ramping up adoption of clean energy and other sustainable infrastructure fast enough to avoid the worst impacts of climate change will require trillions of dollars in new investment — likely in the ballpark of $100-trillion,” the GFANZ co-chairs wrote. “Most of that will have to come from the private sector, especially after the enormous toll that the pandemic has taken on governmental budgets.”

For Carney, the announcement marks a milestone moment after he managed to get some of the world’s biggest financial firms to sign up at the eleventh hour. UK Chancellor Rishi Sunak called the commitments “historic” in a separate statement. He also used the opportunity to announce plans to make Britain, which is hosting the COP26 climate summit, “the world’s first net zero aligned financial centre”.

Despite the huge headline number, sceptics question the underlying terms of the commitments. According to French nonprofit Reclaim Finance, none of the suballiances that make up GFANZ require signatories to stop financing fossil-fuel expansion. And since the 2015 Paris accord was struck, global banks have funnelled $4-trillion into oil, gas and coal, with almost $500bn of that allocated in 2021 alone, according to Bloomberg data.

UN Secretary-General Antonio Guterres said in a recent speech that mankind’s “addiction to fossil fuels is pushing humanity to the brink.” He also said that “there is a deficit of credibility and a surplus of confusion over emissions reductions and net zero targets, with different meanings and different metrics.”

For that reason, Guterres said he plans to establish an expert panel “to propose clear standards to measure and analyse net zero commitments from nonstate actors”.

The Science Based Targets initiative, which certifies corporate climate policies and recently introduced a Net Zero Standard, published a report on Wednesday it says should create a foundation for reaching consensus around net zero.

The “lack of consistent principles, definitions, metrics and evidence of effective strategies to meet the targets limits the ability of financial institutions to support the reduction of emissions in the real economy that is needed to stabilise temperatures at 1.5°C above pre-industrial levels,” SBTi said.

The GFANZ progress report also outlines work under way to define net-zero pathways for carbon-intensive sectors, alignment on what constitutes suitable transition plans for banks and corporates and a sector-wide plan to deploy capital needed for decarbonisation in emerging markets.

Carney said in a recent interview that he’ll be “ruthlessly, relentlessly” monitoring signatories to make sure they live up to their promises. And GFANZ members themselves also addressed the seriousness of the task ahead.

Referring to the headline figure of $130-trillion, Larry Fink, the CEO of BlackRock, said during a COP26 panel on Wednesday that “deploying that capital is going to be far harder” than securing the commitments.

His comments echoed Citigroup CEO Jane Fraser, who noted on the same panel that setting consistent sustainability standards “will make it much easier” for clients to invest in green projects.

For the British government, COP has been an opportunity for the country to try to reinvent itself as a climate leader in a post-Brexit world. Sunak says the goal of becoming a net-zero aligned financial centre will entail a new rule book to ensure that companies follow well-defined standards when reporting their transition plans.

“To guard against greenwashing, a science-based ‘gold standard’ for transition plans will be drawn up by a new Transition Plan Taskforce, composed of industry and academic leaders, regulators, and civil society groups,” Sunak said in the statement.

In its capacity as host of the COP26 talks, Sunak also said that the UK had convened more than 30 advanced and developing countries representing more than 70% of global GDP to back the creation of new global climate reporting standards by the IFRS Foundation “to give investors the information they need to fund net zero”.

“This is critical if we are going to rewire the financial system to prevent climate breakdown,” said Heather McKay, policy adviser at climate think-tank E3G. “I hope that other countries follow suit.”