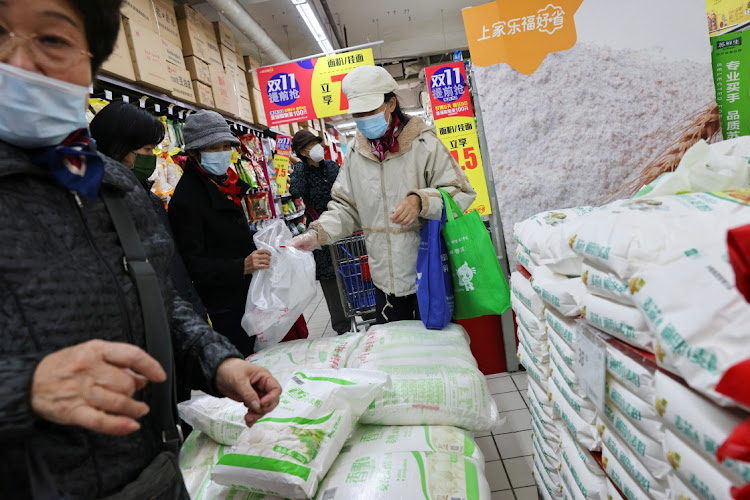 People buy bags of rice at a supermarket following an outbreak of the coronavirus disease in Beijing, China, on November 3 2021. Pictture: REUTERS/THOMAS PETER

More provinces in China are fighting Covid-19 than at any time since the deadly pathogen first emerged in Wuhan in 2019.

The highly-infectious Delta variant is hurtling across the country despite the increasingly aggressive measures that local officials have enacted in a bid to thwart it. More than 600 local infections have been found in 19 of 31 provinces in the latest outbreak in the world’s second-largest economy.

Officials in China say they are committed to maintaining a so-called Covid Zero approach despite the flare-ups that are coming faster, spreading further and evading many of the measures that previously controlled it. The severe responses needed to eradicate the Delta variant have led several other countries with zero-tolerance practices, including Singapore and Australia, to shift focus and instead rely on high vaccination rates to live with the virus as endemic.

Beijing reported nine infections on Wednesday, including one that was earlier reported as asymptomatic. The capital city’s total case count in the current wave now stands at 38, the highest since a pre-Delta outbreak in January and February. Ticket sales into Beijing were halted for trains from 123 stations in 23 regions, according to a government briefing on Wednesday.

Government officials quarantined children in two schools after a teacher was found to be infected. Another 16 were shut because their staff members might have been present at the vaccination venue where the infected teacher recently received a booster shot.

The ministry of commerce urged residents on Tuesday to stock up on necessities for autumn and winter to be prepared for outbreaks that could trigger hard-core lockdowns.

Chongqing, a municipality new to the latest outbreak, initiated mass testing overnight as officials aim to act decisively during the “golden 24 hours” after the virus is first detected. Changzhou, a city in Jiangsu province, has halted schools effectively on Wednesday for at least three days as students turn to online classes.

China could go much further in its bid to eradicate Covid-19. Shanghai Disneyland on Sunday tested more than 30,000 people, keeping visitors at the park until almost midnight, after one infected person was found to have been there. Hundreds of thousands of residents in the remote southeastern city of Ruili on the border with high-risk Myanmar have been banned from leaving for months.

China’s top health expert, Zhong Nanshan, is confident the country can contain the outbreak in a month’s time, according to an interview with state media CGTN.

Despite the global trend of countries learning to coexist with the virus, Zhong, who helped the government quell many outbreaks since the pandemic began, defended China’s Covid Zero approach. While the restrictions necessary to control the virus are costly, opening up the country and allowing the pathogen to spread would exact an even steeper price, he said.

Curbs include the lockdown of tens of thousands of guests at Disneyland in Shanghai to traffic lights turned permanently to red and repeated testing ...
World
6 months ago