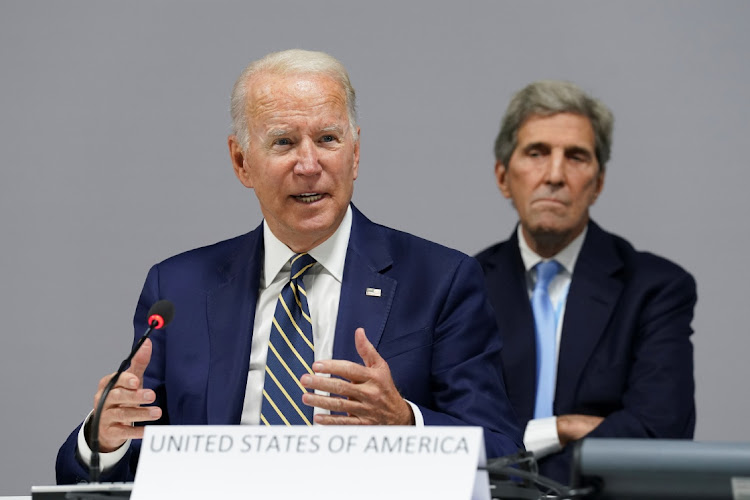 Glasgow — President Joe Biden says the US is ready to be a leader again in the fight against climate change, addressing a UN conference in Glasgow, Scotland, despite discord at home over his ambition to steer billions of taxpayer dollars towards renewable energy.

The Biden administration will “demonstrate to the world the US is not only back at the table, hopefully leading by the power of our example”, the president said on Monday in a speech to the summit.

“I know it hasn’t been the case and that’s why my administration is working overtime to show that our climate commitment is action, not words. “There’s no more time to hang back or sit on a fence or argue amongst ourselves,” he said. “This is the challenge of our collective lifetimes.”

High energy prices only underscore the need to diversify sources and adopt new clean-energy technology, he said. The US would lay out a long-term strategy to reach net-zero emissions by mid-century, he said.

Though there are multiple paths to reach those goals, the White House says they all build on the same foundation of rapidly electrifying cars and buildings while shifting to zero-emission fuels to supply their power.

Under that blueprint released on Monday, the US also needs to improve efficiency, pare methane and boost efforts to strip carbon dioxide from the atmosphere.

“The science is clear. We only have a brief window left before us to raise our ambitions,” Biden said. “This is the decisive decade in which we have an opportunity to prove ourselves.”

Biden proposed that the US government spend $3bn a year to help vulnerable nations adapt to rising seas, droughts and other consequences of global warming. That would be part of the $11.4bn the president has already promised to provide for climate finance each year by 2024, all of which would need congressional approval.  But his pledge falls well short of calls for half of climate finance to go towards adaptation.

Biden came to the Glasgow conference without some of the momentum he had hoped to harness. The US president was unable to convince Democrats to push forward on a vote on his huge infrastructure legislation — which contains climate provisions —  before he left Washington.

Liberals in his party have said they will not vote for that measure until the US Senate advances a separate bill that includes $555bn in additional spending to propel clean energy and fight climate change.

The overall plan would, among other things, expand incentives for the use of solar power and electric vehicles while putting hundreds of thousands of Americans to work in a civilian climate corps to cap abandoned oil wells and make homes more energy efficient.

Biden boasted last week that if enacted, that plan, which would be the largest investment to combat the climate crisis in US history, would reduce US emissions well over a gigaton by 2030.

Yet it remains a draft proposal despite months of negotiations, and that carries the risk of consigning Glasgow to a long line of broken or half-fulfilled US promises on climate, from the Senate’s failure to ratify the Kyoto Protocol to the Trump administration’s withdrawal from the Paris agreement to a failure — so far — to deliver billions pledged to help developing nations address climate change.

Sceptics argue it is hard to convince other nations to make pledges on reducing their reliance on fossil fuels and setting emissions targets when the US itself cannot move such policies through Congress.

White House officials say other leaders are savvy enough to understand that the legislative process is messy, and progress in the negotiations, coupled with the White House’s regulatory actions, are indication enough that the administration will accomplish meaningful change.

The White House also plans to release a national climate strategy that illustrates how the US can meet its global climate commitments by rapidly electrifying transportation and buildings while decarbonising the power sector that supplies them.

It is time for the African continent to initiate a climate expert meeting explicitly focused on Africa’s needs, relevant to global concerns
Opinion
7 months ago