Small businesses and underground entrepreneurs take the plunge with psilocybin 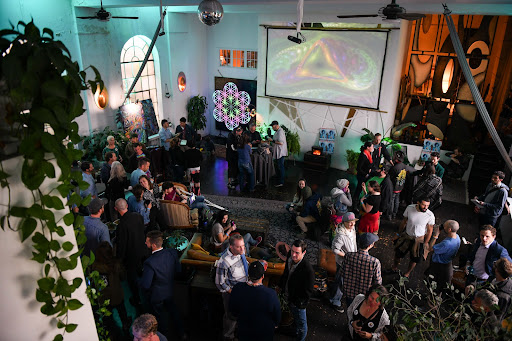 Also on the menu at the little shop in the city’s rapidly gentrifying Chinatown are mushroom chocolates and microdosing capsules, as well as more advanced offerings such as LSD tinctures and vape cartridges containing DMT (the active ingredient in ayahuasca). To make a purchase, flash an ID, sign a health form, buy a product and — if inclined — leave a Google review.

Magic mushrooms are moving from the margins to the mainstream in North America. In the past two years, at least six dispensaries have opened in Vancouver, which recently decriminalised hard drugs and has become a key testing ground for broader policy reform. Similar — albeit more discreet — shops are opening in US cities where mushrooms have been decriminalised, such as Oakland in California and Portland in Oregon.

Commercial sales are still illegal in the US and Canada, but these black market businesses operate through loopholes such as religious freedom exemptions, gifting programmes and pop-up events. Digital sellers proliferate on social media, where anonymous accounts openly hawk heavily branded wares.

“Drug dealers always win,” declares Coca Leaf Café owner Dana Larsen, a cannabis activist who says dispensaries like his are key to advancing mushroom legalisation by normalising recreational use; the dispensary had a court date over licensing issues in June. “We’re putting pressure on the legal system to improve.”

Magic mushrooms are the breakout star of the burgeoning psychedelic revolution around mental health and wellness. Psilocybin — the main hallucinogenic compound in more than 180 mushroom strains — has shown impressive results for conditions such as depression, anxiety, and drug and alcohol addiction — all of which have long been resistant to established medical treatments.

A study published in Nature in July found that those ingesting psilocybin mushrooms in small quantities — a technique known as microdosing — reported better moods and mental health. Likewise, popular media coverage such as Paul Stamets’ Fantastic Fungi documentary and Michael Pollan’s book How to Change Your Mind (now a Netflix series) has helped broaden acceptance of these substances as tools for self-optimisation.

But who gets to capitalise on magic mushrooms and how they gain access remain key questions. The global pharmaceutical psilocybin market, led by companies such as Johnson & Johnson, is predicted to reach $6.9bn by 2027, according to Data Bridge Market Research.

The vast US grassroots movement to decriminalise psilocybin mushrooms is pressing the issue. After Denver led the way in 2019, Oakland, Washington, Detroit, Seattle and Santa Cruz in California soon followed. Fifteen cities or municipalities have now done it, and similar bills are being considered statewide in California, Hawaii and New Jersey.

Though existing US laws protect only personal psychedelic use, decriminalisation is fostering a climate in which underground operators are engaging in sales, distribution and direct or auxiliary services with increasing boldness.

“It’s crazy what’s happening,” says Alli Schaper, co-founder of Multiverse, an online emporium for legal brands selling nonpsychoactive, or adaptogenic, mushrooms. “There are a thousand [psychedelic] microdosing brands selling on Shopify, and even though it’s very illegal, they’re just going for it, seeing if they get caught.”

If psychedelics can be shown to work in controlled scientific studies, that will create a powerful argument for their legal, medical use
Life
1 year ago

Other industry insiders report the rise of community circles where psychedelics are administered by underground healers, as well as pop-up farmers markets and “seshes” — covert events where attendees pay an entry fee and are able to purchase mushrooms directly from growers.

“There is a lot of clandestine investment in underground or grey-market areas,” says Ismail Ali, director of policy and advocacy at the Multidisciplinary Association for Psychedelic Studies, the pre-eminent nonprofit now sponsoring multiple clinical trials for psychedelic-assisted therapy. “Decriminalisation provides a level of protection for behaviours that are already occurring.”

These changes in the law place personal use and possession as the lowest priority for law enforcement, reclassifying such acts as civil penalties subject to fines instead of jail time. Activists say the measures have had a direct impact on the risks that underground operators are more willing to take.

“People are feeling more confident that they won’t go to jail, so much so that they’re opening up storefronts,” says Nathan Howard of Plant Medicine Healing Alliance, an advocacy group in Portland. “They don’t have big neon signs yet, but they’re definitely accessible if you know the right people.”

In Oakland, a psychedelic church called Zide Door operates as a de facto mushroom dispensary through the federal religious freedom exemption. It requires customers to sign a waiver declaring that they accept psychedelic plants as part of their spiritual practice. The establishment — one seasoned cannabis reporter compared it to a basement punk rock club — has become an integral part of the city’s growing psychedelic community. Despite a police raid in 2020, the church remains up and running.

“The volume is definitely turned up,” agrees Travis Tyler Fluck, co-founder of Denver Mushroom Co-operative and a leader of the Decriminalize Denver movement. “There are group meetups where people are happy to share mushrooms and talk about this stuff. It’s a source of pride.”

Leaders of the movement say decriminalisation is an important step to take before legalisation, because it allows individuals and smaller businesses to enter the game at a lower cost than might happen with immediate, broad legalisation and subsequent bureaucracy. 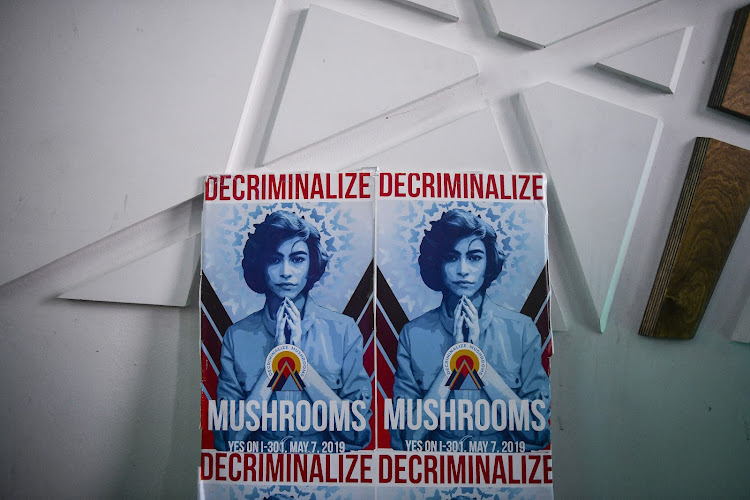 Posters promoting the decriminalising of psilocybin mushrooms in the US. Picture: MICHAEL CIAGLO/GETTY IMAGES

“It allows people to engage at a small level without having to go corporate right out of the gate,” says Carlos Plazola, who cofounded the influential Decriminalise Nature organisation in response to what he views as the missteps of cannabis legalisation.

Because of stiff regulations, high tax rates and steep licensing fees, the recreational cannabis industry is now dominated by big businesses with deep-pocketed investors, while plummeting profit margins have made it difficult for mom and pop shops to survive. As a result, many legacy cannabis operators have chosen to remain underground; California’s illicit marijuana market is now $8bn, double the size of its legal one.

In Oregon, the only state where psilocybin has been legalised for therapeutic use, all residents older than 21 years will have access to mushroom therapy centres from 2023, when the law goes into effect. At these centres, clients will not be allowed to purchase mushrooms for home use. Rather, they will need to go through a process involving the supervision of a licensed facilitator trained under a government-approved programme, who will assist with administering the mushrooms and guiding them through sessions. Though the price of these therapies is still undetermined, they are likely to cost several thousand dollars and not be covered by medical insurance.

The challenge for regulators is how to create a framework that will allow legal mushroom businesses to thrive against fierce competition from the underground. “We know there is an unregulated market, as well as centuries of use by indigenous communities,” says Angela Allbee, the psilocybin services section manager at the Oregon Health Authority (OHA), the government agency tasked with awarding licences for therapy centres, cultivators, testing labs and service providers.

Right now, we benefit from the ambiguity because it keeps big business out. You’re not going to get an investor for $100m when the rules could change tomorrow.

Allbee says the OHA has engaged with community outreach to encourage participants in the unregulated market to come on board. The agency is also engineering a “spore-to-door” tracking system to prevent an overabundance of product from being diverted into the unregulated space. It will be similar to the current “seed-to-sale” system, known as Metrc, that tracks commercial cannabis activity across the distribution chain.

Some experts are concerned that the underground market lacks quality control and other safety measures. “It’s the Wild West and you can do whatever you want,” says Ophelia Chong, cannabis consultant and founder of Asian Americans for Cannabis Education. “There’s no [federal] regulations or testing, it’s all cash, and there’s no-one to answer to.”

Despite these concerns, the grey market is likely to continue to serve large segments of the population who cannot afford legal mushroom therapy. “This model is following the for-profit health-care system that is not accessible to most people,” says Alex Wilson, lead organiser at Decriminalize Nature Portland.

“Right now, we benefit from the ambiguity because it keeps big business out,” Harris says. “You’re not going to get an investor for $100 million when the rules could change tomorrow.” He also regularly hosts educational events in California that centre on people of colour. “Decriminalisation allows people like myself and other legacy folks to get our feet into the game,” he says. “It gives us a runway.”

Some brands are waiting for federal legalisation before entering the psychedelic marketplace, choosing to lay the groundwork with functional, nonpsychoactive mushrooms such as chaga and reishi. Brothers Chris and Joe Claussen, cofounders of First Person, began giving psychedelic mushroom microdoses to their father after watching him slide into dementia. 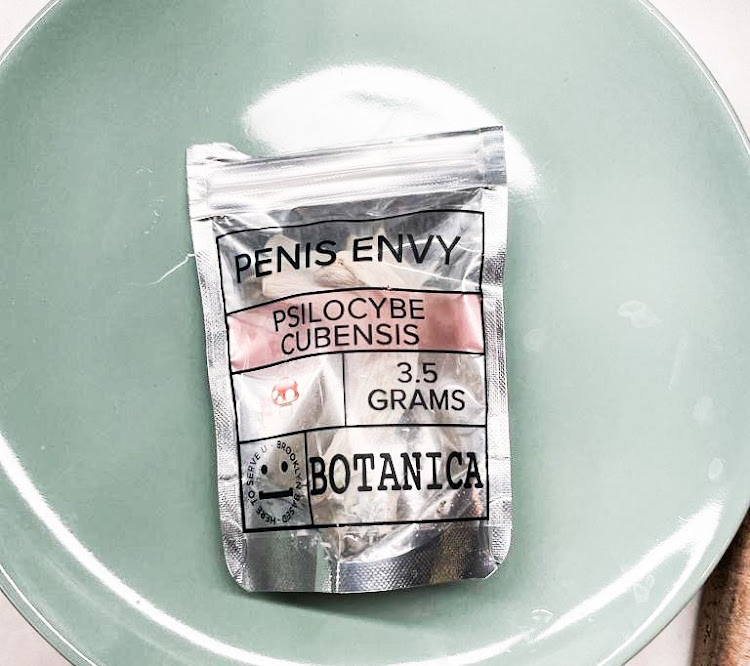 Branded wares from anonymous delivery services use design to add a sense of legality to the otherwise black-market businesses. Picture: BLOOMBERG

“We saw some amazing results and started microdosing ourselves and sharing with our friends,” Joe says. “People were saying that it’s curing their migraines, and they feel better with their kids.” First Person now sells capsules of functional mushrooms and other nootropics with alleged “brain-enhancing” attributes that target neurotransmitter pathways.

The company recently acquired a research & development firm in Jamaica, where magic mushrooms are legal, and started an adaptogenic mushroom farm in Washington state. First Person has also filed for patent applications and has a pending Drug Enforcement Administration licence to grow mushrooms in the US.

Legalisation, Chris says, “is going to be a sh*tshow with 10,000 brands trying to create a name for themselves. We’re creating a larger brand from the ground up, going from spore to store.”

For now black market operators are reaping the benefits of soaring interest from new consumers who might not have a drug dealer’s number in their phone. Coca Leaf Café’s Larsen says his mushroom dispensary sees about 100 customers and $5,000 a day in sales. “There’s a lot of potential revenue in this kind of business,” he says. “I believe we will see hundreds more shops” across the US and Canada.

“Legalisation will happen, too, and you’ll see the regular sources of capital and entrepreneurs,” adds Plant Medicine’s Howard. “But there’s such a demand for things that actually work that the space has taken off — with or without government support.”