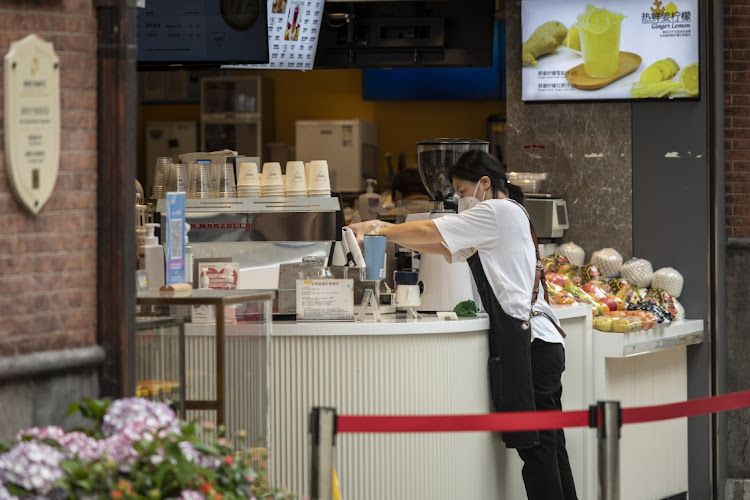 An employee cleans a store counter at a food mart in Shanghai, China, on June 1 2022. Picture: BLOOMBERG/QILAI SHEN

It took only a tiny detail to disrupt William Cao’s exports when Shanghai locked down its 25-million residents: a missing chop, as the official seal used by Chinese companies on legal documents is called.

As CEO of Gracell Biotechnologies — a Chinese drugmaker listed on the Nasdaq and backed by foreign investors including Eli Lilly and Singapore state investment firm Temasek Holdings — Cao had kept the seal secure in the company safe at its headquarters in Shanghai. But when the Chinese financial capital went into deep freeze over an Omicron outbreak, most residents were confined to their homes under the government’s Covid Zero policy and Gracell’s executives weren’t allowed to go to the office.

Gracell’s manufacturing facility in Suzhou, a city near Shanghai, which was not subject to the lockdown order, could continue operating. But without access to the physical chop, the company could not export sophisticated components intended for cancer therapy made by a contract manufacturer in the US.

“The chop is my chop, but the chop is stored in the office that has been locked down,” Cao says. “We wanted to enter the premises, but we were not permitted, for obvious reasons.”

The lockdown also complicated a clinical trial of a multiple myeloma drug for late-stage cancer patients, making it difficult for medical staff to monitor some participants. That had the potential to jeopardise the quality of the data set, Cao said. In an analyst call on May 16, he said the lockdown “may temporarily impact our business”, but added that the company’s “clinical development targets and the time lines remain unchanged for the full year”.

In late May, Shanghai began lifting the lockdown, but for thousands of small and midsize companies such as Gracell the reckoning has just begun. Only now are they able to properly account for the damage that the nine weeks of restricted movement caused to their operations and ambitions. And even as they pick up the pieces, the threat of more lockdowns looms.

China’s unwavering adherence to the Covid-19 Zero strategy is weighing on its economic growth outlook and snarling global supply chains, with companies from Tesla to Sony that manufacture in Shanghai struggling with the fallout from a severe lockdown intended to eliminate the spread of the coronavirus.

“Restrictions are only partially lifted to step up consumption and save the malls,” says Alicia Garcia Herrero, chief economist for Asia Pacific at Natixis. Most Shanghai residents can now go outside, but the government still limits access to the workplace for many companies, restricts travel, and forces people to take PCR tests frequently, she says.

“Growth is bound to remain somewhat sluggish for the rest of year,” says Garcia Herrero, who expects GDP to expand by only 3.5%, down from 8.1% in 2021.

Biotechnology companies such as Gracell are at the centre of China’s push to attain greater heft in the global pharmaceutical industry, a space where the country has lagged in earlier decades. Such small and midsize companies in a variety of industries are especially vulnerable to on-again, off-again lockdowns popping up around the country, says Bruce Pang, head of macro and strategy research at China Renaissance Securities Hong Kong. Smaller companies “are like the capillaries of China’s economy, but their voices are not often heard’,’ he says.

Like many other companies in Shanghai, Gracell tried to keep some operations going by setting up “closed loops”, where some employees live at the workplace and are tested regularly with little outside contact. Gracell had about 10 scientists in a closed loop at its lab in Shanghai, where they could at least continue culturing the company’s cell projects — the building blocks of lifesaving therapies.

They slept in sleeping bags atop mattresses on the floor. There was fortunately a shower on the premises and Gracell even sent an “ayi”, or housekeeper, to live with the researchers while they cared for the cells.

“It’s almost like you’re raising a little child,” Cao says. “If you stop for even a couple of days, those precious cells will die or change their properties, and the data will not be accurate.”

Many companies in and around Shanghai suffered from logistical bottlenecks and supply shortages, issues that continue to plague some even as the lockdown is eased. Gracell prepared in advance, building up an inventory of supplies to ensure manufacturing could continue at its plant in nearby Suzhou.

But the export problem remained unresolved. Cao and his team considered disclosing the combination to the safe where the company chop was secreted to a security guard who was allowed to be at Gracell’s office during the lockdown. Though this would mean that the guard had access to other sensitive material, Gracell executives figured they could mitigate the risk by watching via a live video stream. This plan still left one insurmountable obstacle: movement restrictions meant no executive was able to go to the office to get the chop from the guard.

The worst of the Shanghai lockdown has been ending, and Cao has been looking forward to normalising Gracell’s operations, with employees able to leave their homes and mass transit restarted. That has also allowed the company to regain its chop and its researchers and their ayi closeted in the closed loop to emerge from the lab after performing what Cao calls a “heroic” effort to minimise the impact on Gracell’s science.

The residents in China's largest city endured two months of lockdown frustration, but have now officially ‘regained their freedom’
World
3 weeks ago

Some Beijing residents return to work, while Shanghai moves towards lifting lockdown
World
3 weeks ago
Next Article