Because the problem is complicated, people keep saying the problem doesn’t exist. I’m saying it does 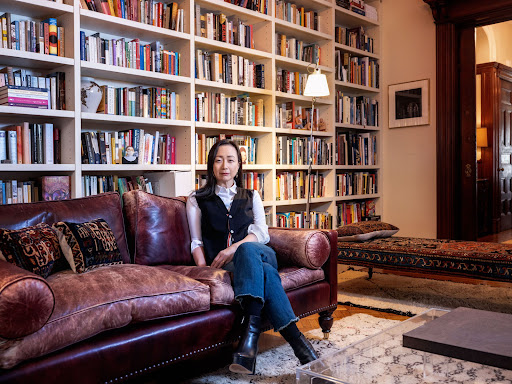 Until recently, Min Jin Lee was primarily known as the best-selling author of Pachinko, a novel that follows a family of Korean immigrants in Japan through the 20th century. (The Apple TV+ adaptation premiered on March 25.) But over the past two years, as violence targeting people of Asian descent in the US has surged, Lee, who grew up in Queens and lives in Manhattan, has turned her Twitter feed into a record of anti-Asian racism. In an interview with Diana Suryakusuma, Lee explains why and how she hopes speaking up will lead to greater equality for all. Here are edited excerpts from their conversation:

The news has been increasingly filled with horrifying stories of violence towards Asian Americans. What motivates you to speak out about anti-Asian hate?

I’m tired of people saying that an attack was random rather than race-based. I believe that when Bipoc women and men are attacked, race is always part of the consideration. It may not be the determining factor, but it’s part of our consideration. I can’t walk out of the house and not be Asian.

Because the problem is complicated, people keep saying the problem doesn’t exist. I’m saying it does. Look at the numbers of Asian Americans being attacked, assaulted, insulted, and killed around the country. It doesn’t matter how well educated you are or how safe you think you are in your suburbs; we come from a very long history of being persecuted in this country.

In New York City the poorest people of colour are actually Asians and Asian Americans, and we make up almost 15% of the local population. We’re constantly being told we don’t exist, but that’s not true. Then we’re told that we want too much. But it turns out we don’t get very much.

How did we get to this current state?

There’s been a great deal of correlation between the rise of Asia and how Asian Americans are perceived. We’re being questioned for our allegiances to countries in Asia with which none of us may have any relationship, and being punished for their political behaviour. Like when Eileen Gu, who is Chinese American, decides to play sports for China, the level of vitriol being levelled at her is different from other Americans who have decided to play for other countries.

With the greater focus on racial equality in the US, how do you think Asian Americans fit in?

I don’t think that it’s helpful for anyone to say that this community’s harm is more or less important. What’s important is that when horrible things are happening to Asians and Asian Americans, we do everything that we can to get more attention on it. I think it’s so critical that we start to have a more nuanced understanding of what it means to be Asian American in this country.

How do we make progress?

I love America so much. I love it with the passion of an immigrant, because I really am so hopeful for change. Things could change radically in this country if we had universal health insurance and child care. If we can think about those things, then with something like racism — which very often is a byproduct of economics as well as learnt hatred — we can start to solve problems.

What do you think the characters in Pachinko would say about the Asian diaspora in the US?

The way Korean-Japanese people of that generation feel about America is quite relevant. Many of them really do see America as this positive space in which they can feel liberated. You have this word “equity”, but I think that if you ask the philosophers, “What is our real goal? Is it to be equal?” the most enlightened would say we want to be liberated from these conventions and to be free.

To live this way, you have to live in a democratic state in which you’re allowed to be who you’re supposed to be. And for many, many people around the world, that is embodied in this country. Whether or not that’s the civic experience of every American can be quite easily disputed. That said, I am still really attached to the romance of America.

If you were writing a book about the experience of the pandemic, what would the opening line be?

“The holdouts are controlling the show.”

That reminds me of the line in Pachinko: “Man, life’s going to keep pushing you around, but you have to keep playing.”

I really want to encourage millennials and Gen Zers to keep playing, to keep showing up, even if you’re exhausted. Obviously rest — I really want people to rest — but I also want people to say, “I’m gonna get up now, and I’m gonna do my small thing.” You’d be amazed at how much can change if you show up regularly.

If there were one law in the world that every person had to follow, what do you think it should be?

Treat people the way you wish to be treated. My father used to always say you don’t want to be a wise guy. By that he meant the person who knows more and therefore can take advantage of someone else. So, even if you know more, even if you can take advantage of somebody else, avoid it, because there are things in your life where you’re not the wise guy. You’re the dummy.

Examining the need for pan-African psychology

BOOK REVIEW: Historians and their versions of truth and myth

Examining the need for pan-African psychology

BOOK REVIEW: Historians and their versions of truth and myth