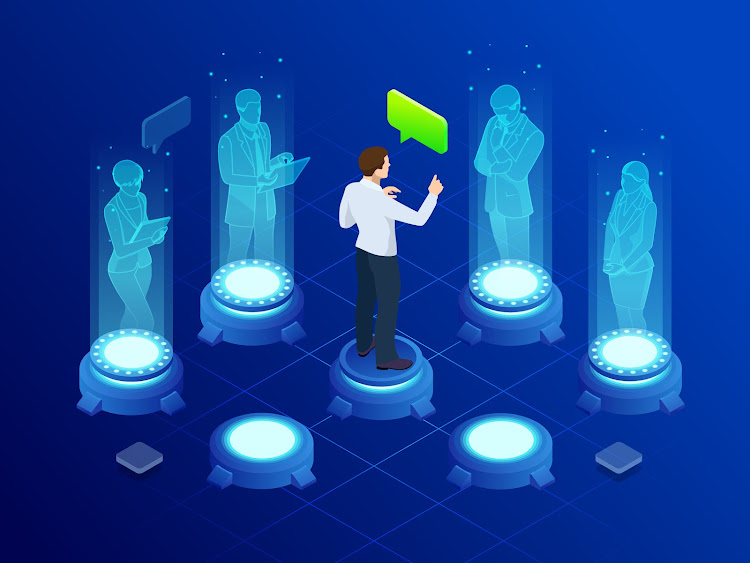 As CEO of Columbia Shipmanagement, Mark O’Neil typically makes dozens of trips a year to far-flung locales for meet-and-greets with the 17,000 crew members of the 400 vessels his company operates. In January he showed up in 3D, 1.8m splendour at a conference in Manila — but travelled just a few kilometres from the company’s Cyprus headquarters.

O’Neil participated in the event as a life-size hologram inside a 2.1m-tall box, and he was able to interact with the audience via a screen in Cyprus. Columbia plans to use the technology to train workers without having to fly people around the world

O’Neil likes the idea so much that he’s planning to purchase more units for other offices. “It was a real ‘beam me up’ moment,” he says. “They felt I was really there.”

At least a half-dozen startups as well as giants such as Google and Microsoft are seeking to provide holographic communications services to businesses, and companies such as DHL, Novartis and luxury watchmaker IWC Schaffhausen have signed on as clients. Driven by the pandemic to rethink the rules of work, corporations see holograms as an innovative way to communicate with employees and customers while cutting down on travel.

Columbia’s system was provided by Portl, a Los Angeles company that sells the hi-tech box O’Neil used in Manila and the Cyprus studio with a camera, light, microphone and backdrop. The whole set-up cost Columbia $160,000, though Portl sells individual boxes for $65,000, and it also offers a $5,000 tabletop version that projects a shrunken version of the subject. Portl has raised $15m from investors including Silicon Valley venture capitalist Tim Draper, and it says it expects to sell 500 booths and 5,000 tabletop units this year. In March the company plans to release an app that will allow users to substitute a cellphone for the studio gear.

Holography was invented by Hungarian-British physicist Dennis Gabor in 1951, and two decades later he won the Nobel prize in physics for the idea. The technology had a breakthrough in 2012 when the late Tupac Shakur appeared as a rapping hologram at the Coachella music festival. That was followed by projected concerts featuring Michael Jackson and Whitney Houston. This spring, “holographic avatars” of the septuagenarian members of the Swedish pop quartet Abba will be accompanied by live musicians for a series of concerts in London.

These days, the technology is making its way into corporate headquarters and onto stages for conferences and sales presentations. “Holograms were never in demand for anything but entertainment until recently,” says David Nussbaum, who founded Portl in 2019. “Instead of digitally resurrecting dead artists, I saw holograms as a new way of communication.”

Some sceptics say Portl and its rivals don’t offer true holograms, but rather two-dimensional holographic projections. Strictly speaking, holograms are meant to be 3D images projected into thin air by lasers, so you can walk around and view them from all angles. Portl’s images, by contrast, require the box, which creates the illusion of depth, but when viewed from the side or behind it’s ... just a box. Google is testing a booth with cameras and a glass screen where users can chat face-to-face with life-size, 3D images of each other. And Microsoft offers holograms viewed through virtual-reality headsets.

The problem, says Larry O’Reilly, CEO of Toronto-based ARHT Media, is that full-size holograms require more data than today’s networks can typically transmit. His company, which has a long list of multinational clients such as AstraZeneca, Ericsson and UBS, uses a projector to show an image on a screen.

Customers can buy a set-up to capture and display holograms for about $100,000 or lease it for $25,000 a day. Last year, ARHT signed a deal with WeWork, the shared-offices company, to offer the service, and it’s building hologram studios in 30 locations from New York to Singapore.

“People can’t look away,” O’Reilly says. “We create the illusion of 3D in a life-size person or object with no noticeable latency, which creates a sense of presence.”

Sherrif Karamat, CEO of the Professional Convention Management Association, says he’s a fan of the technology but insists vendors must bring down prices sharply before it will be widely adopted. A year ago he appeared as a hologram via ARHT’s technology at his group’s annual meeting in Singapore.

Onstage with a live moderator and several others, he says the conversation flowed easily, and he even elbow-bumped a fellow speaker at one point. “Holograms are here to stay, and they’ll be used more and more,” Karamat says. “But we’ll always want to be there in the room at times.”

The transformative power of mixed reality in the manufacturing industry

Companies worldwide are adapting their ventilation, layout and space requirements as people find they like working from home
World
11 months ago

The dark cloud over our techy-smart children is very dark indeed, so be vigilant about their exposure to smart technologies
Opinion
10 months ago
Next Article

Wanted Online: The DNA of a pair of jeans

CHRIS THURMAN: On the make with Igshaan Adams’ ‘skarrelbaan’

Wanted Online: The DNA of a pair of jeans

CHRIS THURMAN: On the make with Igshaan Adams’ ‘skarrelbaan’