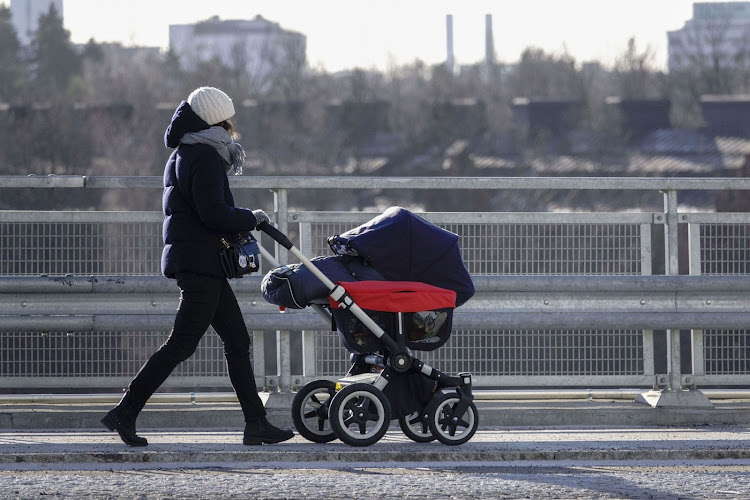 Finland’s government has been working hard  to stem the country’s rapid population decline.

Since the 2019 elections, a cabinet run by a millennial woman has produced eight offspring, with two more on the way. Finns generally have joined in the baby making: the number of live births jumped 6.7% last year, the most in nearly five decades.

Other countries on Europe’s northern rim have experienced their own pandemic baby bumps, making the region of 28-million people an outlier among advanced economies, several of which have seen fertility rates drop to historic lows.

Researchers looking for clues to why the Nordics bucked the trend have converged on a likely answer: robust social safety nets, including policies designed to ease the burden of parenthood, insulated couples from the economic stresses experienced by peers in other industrialised countries. The lessons could prove useful for a host of nations trying to blunt the effects of rapidly ageing populations, including an erosion in public finances and slower economic growth.

“The number of births has remained stable or even increased across almost the entire Nordic region,” says Nora Sanchez Gassen, a researcher at the Stockholm-based Nordregio institute, which will publish a report on the phenomenon in March. “This has been interpreted as a sign of couples’ trust in the welfare system and in the ability of the Nordic economies to master the current crisis.”

This has been interpreted as a sign of couples’ trust in the welfare system and in the ability of the Nordic economies to master the current crisis.

At the start of the pandemic, there was speculation that weeks or months of forced isolation would foster procreation. Yet in many countries the opposite happened.  Italy reported a 14% annual fall in births in January 2021, and South Korea’s fertility hit a record low last year. Less drastic but still concerning, US statisticians said in December that the population grew only 0.1% last year, the least on record.

In contrast, live births climbed in all of the Nordics in 2021, led by Iceland where they rose 7.5%. Norway’s 5.5% gain was the first increase in 13 years. Sweden reported the smallest increase, at 1%. The country imposed only mild restrictions at the start of the pandemic, suggesting a negligible impact on parenthood decisions.

“The pandemic definitely had an impact on our decision to try for a second child,” says Heini Korpela, 38, who oversees influencer marketing at Otavamedia Oy in Helsinki and gave birth to a baby girl in June. “We’d spent so much time at home that it didn’t feel like a big deal to stay home with another baby.”

For Tryggvi Sigurdsson, a 36-year-old engineer from Reykjavik who became a father for the third time last June, one upside of the Covid-19 crisis is that there was more familial support for new parents. “Everyone is spending a lot of time at home, including grandparents for instance, so people might be more available to babysit,” he says.

The Nordic model of high taxes to finance extensive welfare benefits, including extended parental leave and subsidised child care, appears to be the crucial differentiator. Most relevant to the pandemic, unemployment benefits last from 11 months in Sweden to as long as 30 months in Iceland and can cover as much as 90% of a previous salary, with some limits. 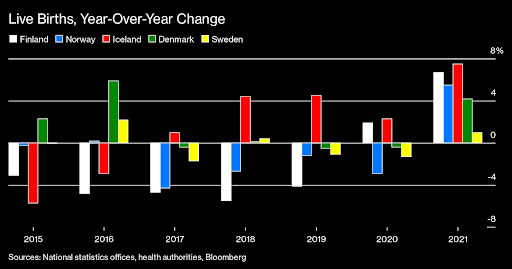 Ane Margrete Tommeras, an adviser with Statistics Norway, says it is difficult to establish how big a part the Covid crisis played in nudging up birth rates, pointing out that they were already rising in some Nordic countries, such as Finland. “Fertility might have increased anyway, making it difficult to say what role the pandemic combined with the welfare state have had on fertility in the Nordics at this point,” she says.

Ronald Lee, a professor of demography and economics at the University of California at Berkeley, suggests that the successive cycles of infection that have characterised the Covid pandemic may have a different effect on fertility than the “one-and-done epidemics” seen in the past. While after historical shocks, countries passed through diminishing up- and down-cycles of births before returning to longer-term trends, he is less confident about such an outcome this time, citing “uneven” global data, including from the Nordics.

In the view of other experts, the most likely scenario is that pre-existing demographic trends will reassert themselves once the threat from the virus subsides. “The Nordic welfare state helps resilience,” says Arnstein Aassve, a professor of demography at Bocconi University in Milan. Still, “as with previous pandemics, one’s best bet is that fertility will return to the long-term trend”.

Want a beer? A coffee date? A snog? Then just stick this up your nose

As the world opens up, rapid antigen tests are going to become part of social interactions
Opinion
3 months ago

1.
Venture capitalists cast the net wide in search ...
Businessweek
2.
The fog of cyberwar descends on Ukraine and Russia
Businessweek

CHRIS THURMAN: Training in the arts is a life-long seminar

Fine dining at the V&A Waterfront?

1.
Venture capitalists cast the net wide in search ...
Businessweek
2.
The fog of cyberwar descends on Ukraine and Russia
Businessweek

CHRIS THURMAN: Training in the arts is a life-long seminar

Fine dining at the V&A Waterfront?