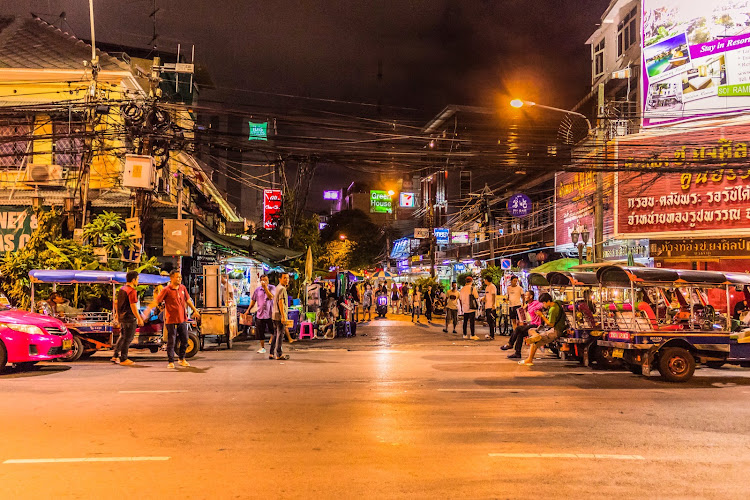 A night market at Soi Ram Butri in Bangkok before the Covid-19 pandemic. Picture: 123RF/SOMBATPKT

In downtown Bangkok’s Patpong area, most evenings are quiet. Before the pandemic, it was one of the world’s most notorious red-light districts, attracting foreign tourists to its many bars, nightclubs and massage parlours. With the tourism industry decimated by two years of Covid-19, most of the street’s businesses are locked, with “Closed” signs in the windows. At the area’s night bazaar — for decades the place to buy Red Bull T-shirts, Thai boxing pants and fake Rolex watches — the vendors are gone.

Thailand wants to get them back. Tourism accounted for one-fifth of the country’s GDP before the pandemic, with almost 40- million foreign tourists generating more than $60bn in 2019. In early February, Prime Minister Prayuth Chan-Ocha’s government began allowing vaccinated travellers to enter quarantine-free.

Like many countries that are now treating Covid-19 as endemic, Thailand is eager to jump-start its tourism industry. But visitors expecting bustling restaurants, bars and markets may be in for a shock, because many of the small businesses that played major roles in Thailand’s tourism ecosystem closed during the lockdowns and haven’t reopened. And large, higher-end businesses are offering steep discounts and special packages to capture the few visitors who are still travelling, squeezing out the smaller operators that have survived.

Now when you travel generally, first and business classes are full, while economy is empty

Thailand’s strict travel regulations, such as requirements to take multiple Covid tests and provide proof of medical insurance with at least $50,000 coverage, will also limit the type of people who come, according to Bill Heinecke, chair of Bangkok-based Minor International, one of Southeast Asia’s largest hospitality, restaurant and lifestyle companies. “Now when you travel generally, first and business classes are full, while economy is empty,” Heinecke says. “So the kind of travellers that we’re seeing now are the higher-end travellers who tend to stay longer because of all the hassle you have to go through.”

It’s likely to take at least until 2024 for the industry to return to pre-pandemic levels. In 2022, the Thai government expects to see fewer than 10-million foreign travellers. And that’s an optimistic forecast that assumes Omicron and other new variants don’t impair a recovery in the second half of the year.

Earlier efforts to revive tourism included a subsidy programme to help pay for domestic travellers’ accommodations, flight tickets and meals. The government also has what it calls a travel sandbox plan, which allows foreign visitors to bypass a mandatory isolation, provided they spend at least a week in Phuket or one of three other approved beach destinations.

Thai hotels and airline associations say these measures don’t do enough to alleviate costs, especially for smaller hotel operators hit by the lack of large tour groups from overseas. Staffing is a special challenge for small operators, according to Marisa Sukosol Nunbhakdi, president of the Thai Hotels Association. “To reopen, hotels need personnel and manpower, but at the same time, there’s not enough demand and money to do all this,” she says. “Many of the workers in the industry have gone back home or changed careers during the pandemic, and they are unwilling to return, because they would be faced with a lot of costs.” 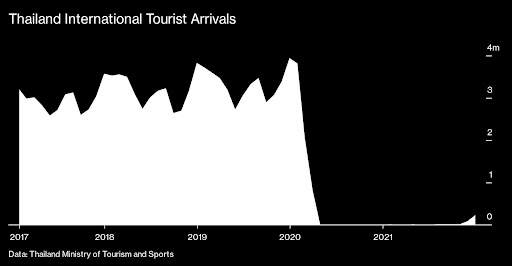 Average wages in the tourism sector fell 9.5% in the third quarter of 2021, the most recent period for which data is available, as workers moved into lower-paid jobs, while average working hours declined by 10%, the International Labor Organization reported in November. Thai hotels’ average occupancy rate in January decreased to 32% from 37% in December, as the Omicron variant’s spread prompted the government to tighten entry rules. As guest numbers remain low, most Thai hotels have chosen to retain workers on a temporary basis rather than hiring them full-time in case they need to cut costs again, according to a Hotel Business Operator Sentiment Index report by the THA and Bank of Thailand.

That complicates efforts to revive the industry. “The tourism sector that Thailand depends on a lot will take a long time to recover,” Bank of Thailand Assistant governor Piti Disyatat said on February 9. “If the industry has labour shortages, they won’t be able to receive a lot of tourists, and the economy won’t be able to expand as much as it should.”

Moreover, not many foreign travellers are going to risk a trip to Thailand if they have to quarantine upon their return home, as is now the case in many countries. That’s why Prayuth’s government on February 7 said it wants to start talks soon with China — the nation’s largest source of foreign tourists — and Malaysia to create bilateral travel bubbles that would eliminate quarantine risks on both ends. “We think a travel bubble will be more positive for Thailand’s tourism sector than the currently implemented ‘Test & Go’ quarantine-free scheme, as the latter alone is not enough to attract tourists who will have to quarantine on their return,” Tim Leelahaphan, a Bangkok-based economist at Standard Chartered, said in a note.

Thailand has plenty of competition vying for foreign visitors returning to Asia. The Philippines in early February began allowing inoculated tourists to enter without quarantine if they have a negative test result and health insurance, while Indonesia reopened Bali to all foreign tourists, with those fully vaccinated subject to a quarantine of five days and the unvaccinated for seven days. And Sri Lanka on February 12 resumed issuing tourist visas upon arrival for most travellers for the first time since the start of the pandemic. Now that countries are opening up their borders, the real test will be whether travellers — and Covid-19 — do their part.

In Siem Reap, Cambodia, travel has just begun to reopen, creating glimmers of hope for locals
News
3 months ago