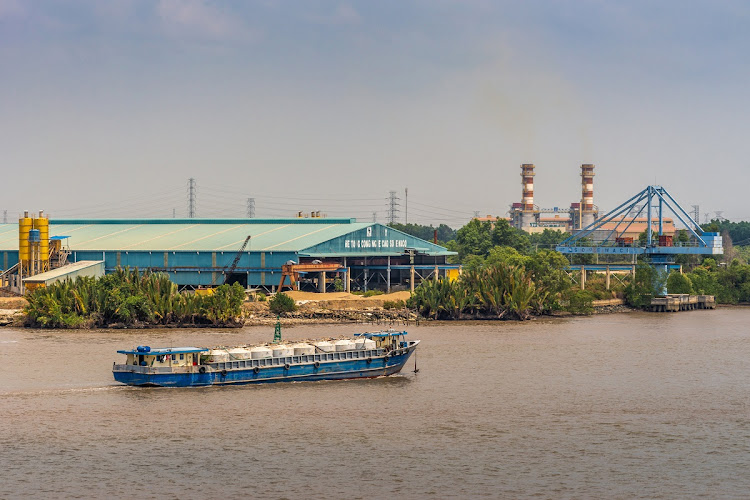 A vessel sails in front of a concrete factory on the Long Tau River in Vietnam. Picture: 123RF/FINCIOENJ

For almost five years Le Thi Kim Dung sewed jeans for American brands at an industrial complex on the outskirts of Ho Chi Minh City. When the Delta variant of the coronavirus swept through the area in the northern hemisphere summer, authorities ordered the factory where she worked to shut down — while imposing a travel ban that stranded Dung and her husband in a cramped boarding house with a community toilet down the hall.

In October, when restrictions eased, the two hopped on a motorbike and drove 160km south to their native village in the Mekong Delta — and Dung isn’t sure they’ll go back to work. “I’m so scared,” says the 34-year-old. “A lot of people got infected and were taken away.”

The global economy has a lot riding on the decisions of hundreds of thousands of people like Dung, who fill factories the size of football fields, owned by multinationals and local companies alike. As relations between the US and China have deteriorated, Vietnam has emerged as a manufacturing hub, with annual exports climbing almost twentyfold in the past two decades, to $283bn in 2020.

Samsung Electronics manufactures refrigerators and dishwashers there; subcontractors for Urban Outfitters, Calvin Klein, and Gap make T-shirts, jeans, and sweaters; and Nike, Adidas, and Puma get hundreds of millions of pairs of shoes.

These days, many manufacturers are limping along with 70% or less of their workforce as employees resist returning to their sewing machines and metal presses. While that is an improvement from a few months ago,  when thousands of factories like Dung’s were shut down entirely, most companies remain months away from reaching full production capacity.

“The government thought it could just turn the lights back on in the factories, start the machines up, and the workers would come back,” says Carl Thayer, emeritus professor at the University of New South Wales in Australia. “You can’t force them.”

With Vietnam’s recovery at risk, the government and factory owners are doing everything they can to lure people back to their jobs. A Nike supplier is offering $100 bonuses, about a quarter of an average worker’s monthly salary. A maker of New Balance sneakers promises free daily transport to Ho Chi Minh City from nearby rural provinces. Parliament is planning hearings on the labour shortage, and government officials are setting up Zoom job fairs, sending pleading text messages, and offering rent relief and accelerated access to vaccines for returning assembly line workers.

“If the people come back they’ll want rent support,” says Le Dang Doanh, an economist and former government adviser in Hanoi. “They want to be vaccinated to be as safe from the pandemic as possible.”

Vietnam fared well early in the outbreak of the pandemic, with only 35 recorded deaths before April 2021, leaving a sense of relief and pride that the country had dodged the worst of the pandemic. But when the Delta variant reached Asia in the first qurter of 2021, the country — with just 25% of the population vaccinated even today — was hit hard, especially in the south, where lower-end manufacturing is concentrated. Covid deaths now exceed 22,000 nationwide, with almost 17,000 of those in Ho Chi Minh City.

As things spiralled out of control, authorities imposed draconian measures such as a prohibition on venturing out even to buy groceries. (Soldiers were recruited to make deliveries.) Manufacturers were told they could remain open only if they offered on-site room and board for employees, spurring some to put up tent colonies on factory floors but many more to simply shut down.

With buses back to Ho Chi Minh City scarce and expensive because of travel restrictions, Dung has no plans to leave her village, where barges loaded with bananas, watermelons, papayas, and mangoes float down the river. She’s happy to be reunited with her six-year-old daughter, her husband has found part-time work on nearby construction projects, and her brother has also returned home from his factory job.

Besides, she’d spent her savings on rent and food while stuck in the boarding house. “It’s better to stay home and earn less than to go back and see people getting ill and dying,” she says. “Our parents can help us, we planted our own rice, and we don’t have to pay rent.”

Energy security has shot to the top of government agendas in Asia and Europe as shortages of coal and rocketing gas prices trigger power outages, ...
World
7 months ago