Several senior officials have been accused of responsibility but, to date, no-one has been held to account 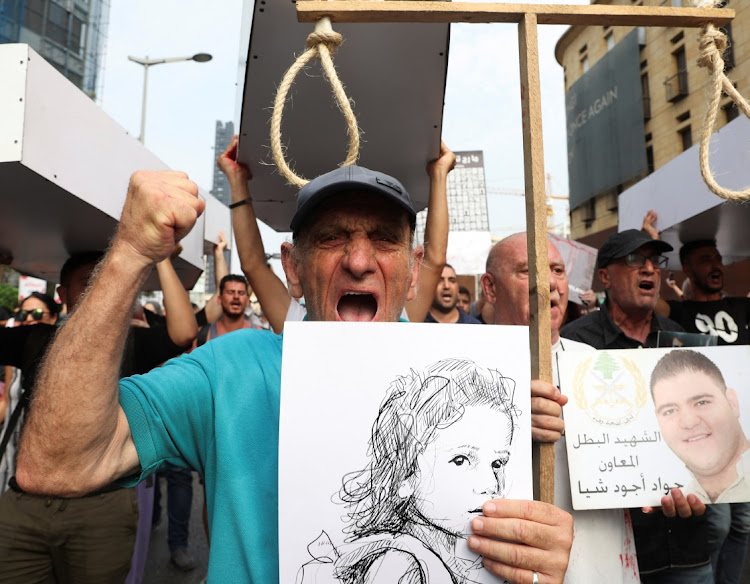 A demonstrator gestures during a protest as Lebanon marks the two-year anniversary of the August 2020 Beirut port explosion, in Beirut Lebanon, August 4 2022. Picture: MOHAMED AZAKIR/REUTERS

Thousands of protesters marched tearfully in the Lebanese capital on Thursday, marking two years since a cataclysmic explosion at the Beirut port, with chants denouncing the government's failure to uncover the truth behind the blast.

In a grim reminder of the disaster, several grain silos that were left heavily damaged by the blast collapsed on Thursday afternoon, only hundreds of metres away from where crowds were gathering at the city's waterfront.

The concrete silos cracked and fell, sending a cloud of smoke into the sky. Protesters covered their mouths in disbelief.

“Seeing the smoke coming out — especially that I was here during the blast — triggers a very bad memory. It was the same smoke coming from the silos up to the sky,” said protester Samer al-Khoury.

The protesters, wearing T-shirts stamped with blood-red handprints, were marching from Lebanon’s justice ministry to the city’s waterfront and then to parliament in the centre of Beirut.

The blast flattened swathes of the city on Aug 4 2020, killing at least 220 people. One of the largest non-nuclear explosions in history, it was caused by huge stores of ammonium nitrate kept at the site in the port and neglected since 2013.

“It’s important for me to be here today because it’s very important for us to seek justice and accountability for what happened,” said Stephanie Moukheiber, a Lebanese woman living in Canada for the past decade, who decided to spend the summer in Lebanon.

“What happened was not a mistake, it was a massacre. It destroyed an entire city.” 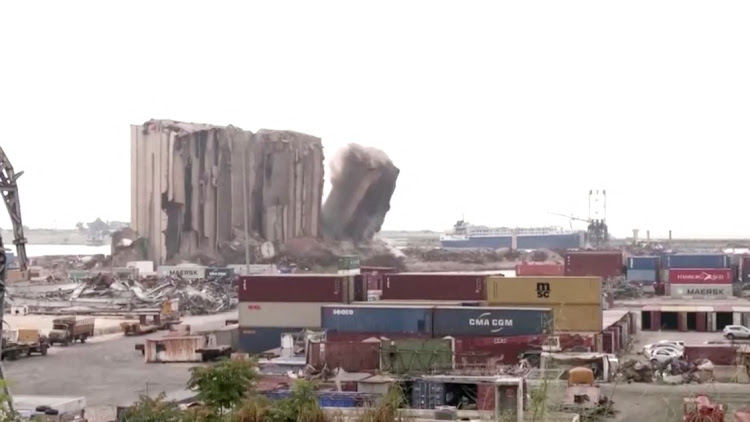 A screen grab from a video shows a silo that was destoryed in a 2020 blast, as a part of it collapses, in Beirut, Lebanon, August 4, 2022. Picture: REUTERS TV

Several senior officials have been accused of responsibility but, to date, no-one has been held to account — symptomatic, critics say, of a governing elite hamstrung by corruption and on whose watch Lebanon has descended into a political and economic crisis.

Lebanon President Michel Aoun said days after the blast that he had been warned about the chemical stores at the port and asked security chiefs to do what is necessary.

The prime minister at the time also said he had been informed — but no-one warned the population about the dangers of the materials. An investigation into the blast has been stalled for more than six months.

“What more do you want, what more than this crime of the century, to act?” said Rai, who retains significant political influence in Lebanon’s sectarian power-sharing system.

Families of victims have also pressed the UN Human Rights Council to establish an international enquiry and on Thursday protested outside the French embassy in Beirut, urging Paris to back an external investigation.

The French embassy had no immediate comments on these allegations.

UN secretary-general Antonio Guterres on Thursday marked “two years without justice”, and called in a tweet for “an impartial, thorough and transparent investigation” — a plea echoed by the EU’s delegation in Beirut.

Pope Francis also said on Wednesday he hoped the people of Lebanon could be comforted by justice over the blast, saying “the truth can never be hidden”.

The remnants of silos heavily damaged in the explosion began to crumble this week, with several collapsing on Sunday and chunks of cement falling off them on Thursday.

A fire had smouldered at the foot of the silos for weeks, the result of summer heat igniting rotting and fermenting grain, officials said, adding that more of the structures could collapse at any time.

“The scars are still there. Internally, externally,” said Omar Jheir, the owner of a coffee shop in Beirut heavily damaged in the explosion. “Especially (since) we haven’t seen justice yet.”