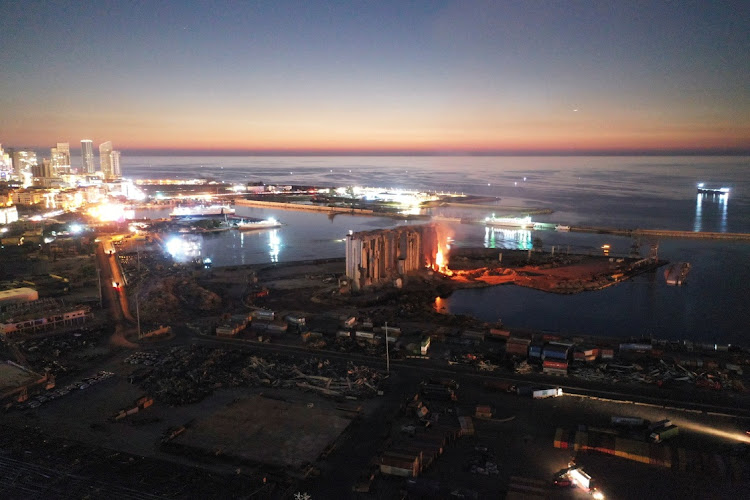 Smoke rises from a fire at the Beirut grain silos, part of which collapsed in Beirut, Lebanon, July 29 2022. Picture: ISSAM ABDALLAH/REUTERS

Beirut — Part of the grain silos at Beirut Port collapsed on Sunday just days before the second anniversary of the huge explosion that damaged them and part of the city, sending a cloud of dust over the capital.

Lebanese officials warned last week that part of the silos — a towering reminder of the catastrophic August 4 2020 explosion —  could collapse after the northern portion began tilting rapidly.

A fire had been smouldering in the silos for several weeks, which officials said was the result of summer heat igniting fermenting grains rotting inside since the explosion.

The 2020 blast was caused by ammonium nitrate unsafely stored at the port since 2013. It is widely seen by Lebanese as a symbol of corruption and bad governance by a ruling elite that has also steered the country into a devastating financial collapse.

One of the most powerful non-nuclear blasts on record, the explosion resulted in the deaths of more than 200 people, wounded about 6,000 people and shattered swathes of Beirut.

Ali Hamie, the minister of transport and public works in the caretaker government, said he feared more parts of the silos could collapse imminently. 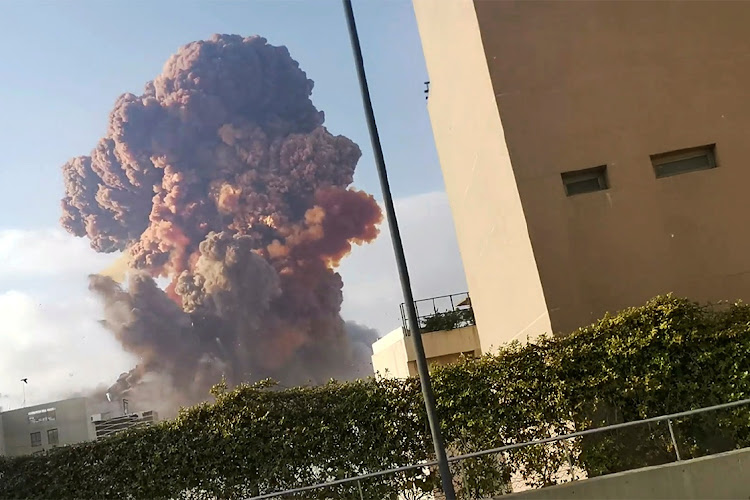 Smoke rises after an explosion in Beirut, Lebanon, August 4 2020, in this picture obtained from a social media video. Picture: KARIM SOKHN/REUTERS

Environment minister Nasser Yassin said that while the authorities did not know if other parts of the silos would fall, the southern part was more stable.

The fire at the silos had put many Beirut residents on edge for weeks.

There has been controversy over what do to with the damaged silos.

The government took a decision in April to destroy them, angering victims’ families who wanted them left to preserve the memory of the blast. Parliament last week failed to adopt a law that would have protected them from demolition.

Citizens’ hopes that there will be accountability for the 2020 blast have dimmed as the investigating judge has faced high-level political resistance, including legal complaints lodged by senior officials he has sought to interrogate.

Prime Minister-designate Najib Mikati has said he rejects any interference in the probe and wants it to run its course.

However, reflecting mistrust of authorities, many people have said they believed the fire was started intentionally or deliberately not been contained.

Divina Abojaoude, an engineer and member of a committee representing the families of victims, residents and experts, said the silos did not have to fall.

“They were tilting gradually and needed support, and our whole goal was to get them supported,” she told Reuters.

“The fire was natural and sped things up. If the government wanted to, they could have contained the fire and reduced it, but we have suspicions they wanted the silos to collapse.”

Reuters could not immediately reach government officials to respond to the accusation that the fire could have been contained.

Earlier in July, the economy minister cited difficulties in extinguishing the fire, including the risk of the silos being knocked over or the blaze spreading as a result of air pressure generated by army helicopters.

Fadi Hussein, a Karantina resident, said he believed the collapse was intentional to remove “any trace of August 4”.

“We are not worried for ourselves, but for our children, from the pollution,” resulting from the silos’ collapse, he said, noting that power cuts in the country meant he was unable to even turn on a fan at home to reduce the impact of the dust.