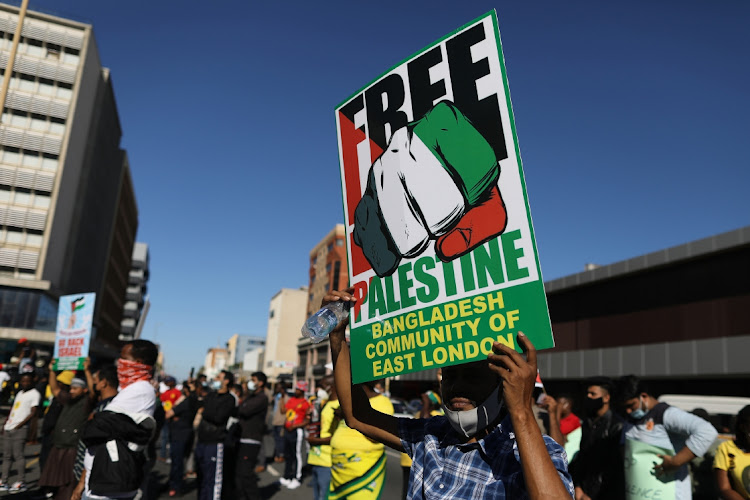 A demonstrator holds a placard during a Palestine solidarity march in Buffalo City, May 23 2021. Picture: ALAN EASON

Geneva/Jerusalem — An independent commission of inquiry set up by the UN Human Rights Council (UNHRC) after the 2021 Gaza war said Israel must do more than end the occupation of land Palestinians want for a state, according to a report released on Tuesday.

“Ending the occupation alone will not be sufficient,” the report said, urging additional action to ensure the equal enjoyment of human rights.

It cited evidence saying Israel has “no intention of ending the occupation” and is pursuing “complete control” over what it calls the Occupied Palestinian Territory (OPT), including East Jerusalem, which was taken by Israel in a 1967 war.

Israel boycotted the inquiry and barred entry to its investigators.

Israel’s foreign ministry said: “It is a biased and one-sided report tainted with hatred for the State of Israel and based on a long series of previous one-sided and biased reports.”

While prompted by the 11-day May 2021 conflict in which 250 Gaza Palestinians and 13 people in Israel died, the inquiry mandate includes alleged human rights abuses before and after that and seeks to investigate the root causes of the tensions.

US state department spokesperson Ned Price reiterated Washington’s opposition to the inquiry and said the report does nothing to alleviate US concerns over “a one-sided, biased approach that does nothing to advance the prospects for peace.”

Israel withdrew from Gaza in 2005 but, with the help of Egypt, clamps down on the borders of the enclave now governed by Hamas Islamists. Palestinian authorities have limited self-rule in the West Bank, which is dotted with Israeli settlements.

Hamas, which is sworn to Israel’s destruction, opened the May 2021 war with rocket attacks after moves to evict Palestinian families in East Jerusalem, and in retaliation for Israeli police clashes with Palestinians near al-Aqsa mosque, Islam’s third holiest site.

The Gaza fighting was accompanied by rare street violence within Israel between Jewish and Arab citizens.

Hamas welcomed the report and urged the prosecution of Israeli leaders in what it said were crimes against the Palestinian people.

The Palestinian Authority (PA) also praised the report and called for accountability “in a manner that puts an end to Israel’s impunity”.

The report will be discussed at the Geneva-based UNHRC next week. The body cannot make legally binding decisions.

The US quit the UNHRC in 2018 over what it described as its “chronic bias” against Israel and only fully rejoined this year.

Unusually, the three-member commission of inquiry from Australia, India and SA has an open-ended mandate. A diplomat said that its mandate was already a sensitive issue. “People don't like the idea of perpetuity,” he said.