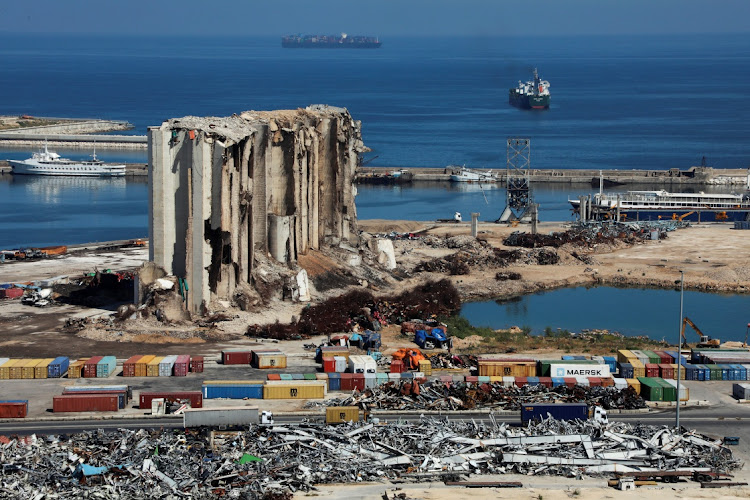 A general view shows the Beirut silos damaged in the August 2020 port blast, ahead of the parliamentary election in Beirut, Lebanon May 13 2022. Picture: REUTERS/MOHAMED AZAKIR

Beirut — Two Lebanese legislators charged in connection with the 2020 Beirut port blast have been re-elected in the first poll since the catastrophe, leaving some families of victims fearing further delays in a stalled investigation into the explosion.

Many in Lebanon blame the disaster, which killed more than 215 people, on safety failings by senior political and security officials. Accountability for the blast emerged as a main rallying issue for opposition candidates and voters.

Khalil and Zeaiter were charged in December 2020 but deny any wrongdoing and have declined to attend interrogation hearings, citing immunity afforded to them by their parliamentary seats.

The investigations are secret so the exact charges against them have not been made public.

Rima Zahed, whose brother Amin died in the blast and who sits on a committee representing victims, described their victory as a “farce”.

Another committee member, Kayan Tleis, whose brother Mohammad died in the explosion, told Reuters: “We are troubled and provoked and don’t want anybody to be above the law.”

An arrest warrant was issued for Khalil but was not implemented by security forces, who cited parliamentary immunity.

Lawsuits filed by suspects including the two MPS against the judge investigating the blast have stalled the probe for months.

Still, victims’ relatives said they were encouraged by wins by newcomer opposition candidates in Beirut, who took five of 19 seats across the capital's two electoral districts.

“We have more people in parliament who can work for us... They are people who will help our cause,” Tleis said. “I hope we will not have to wait long for justice.”

Newcomers who won include the former head of the Beirut Bar Association, Melhem Khalaf, who was backed by the families of some blast victims.

“He is our voice,” said Zahed, who was celebrating Khalaf's victory at his home on Monday night.