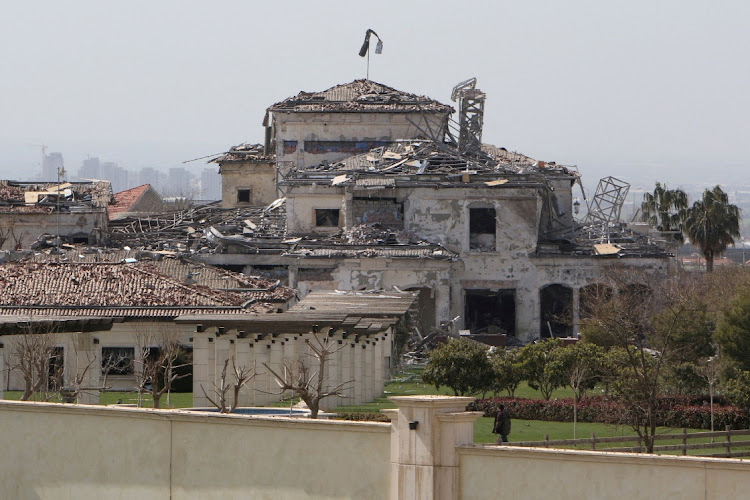 A damaged building in the aftermath of missile attacks in Erbil, Iraq, March 13 2022. Picture: AZAD LASHKARI/REUTERS

The missiles, which reports said numbered more than 12,  targeted the US consulate among other sites, according to the Kurdish regional government.

The missile attack comes as talks to revive the 2015 Iran nuclear deal face the prospect of collapse after a last-minute Russian demand forced world powers to pause negotiations for an undetermined time despite having a largely completed text.

The missiles, which targeted the US consulate’s new building and a neighbouring residential area, caused only material damage and one civilian was injured, the Kurdish interior ministry said. An Iraqi security official told Reuters that the missiles were manufactured in Iran.

“Any repetition of attacks by Israel will be met with a harsh, decisive and destructive response,” the Revolutionary Guard said in the statement.

A US official blamed Iran for the attack earlier on Sunday but did not give further details. A Kurdish spokesperson for the regional authorities said that Sunday’s attack only targeted civilian residential areas, not a foreign base and called on the international community to carry out an investigation.

Separately, a US state department spokesperson called it an “outrageous attack” but said no Americans were hurt and there was no damage to US government facilities in Erbil. US ambassador to Iraq Mathew H Tueller condemned the attack and said “Iranian regime elements have claimed responsibility for this attack and must be held accountable”.

US forces stationed at Erbil’s international airport complex have in the past come under fire from rocket and drone attacks that Washington blames on Iran-aligned militia groups, but no such attacks have occurred for several months.

Asked about Sunday’s attack, Israel’s military said it did not comment on reports in the foreign press and the prime minister's office declined to comment.

In another sign of increased regional tensions, Iran also suspended on Sunday a fifth round of talks with regional rival Saudi Arabia that were due to take place in Baghdad on Wednesday.

On Saturday, Saudi Arabia said it had executed 81 men in its biggest mass execution in decades. Activists and human rights defenders said 41 were Shiite Muslims from the eastern Qatif region, which has historically been a flashpoint between the Sunni-dominated government and minority Shiites.

The last time ballistic missiles were directed at US forces was in January 2020 — an Iranian retaliation for the US killing earlier that month of its military commander Qassem Soleimani at Baghdad airport.

No US personnel were killed in the 2020 attack but many suffered head injuries.

Iraq and neighbouring Syria are regularly the scene of violence between the US and Iran. Iran-backed Shiite Islamist militias have attacked US forces in both countries and Washington has on occasion retaliated with air strikes.

An Israeli air strike in Syria on Monday killed two members of Iran's Revolutionary Guards Corps (IRGC), Iranian state media said last week. The IRGC vowed to retaliate, it said. Israel has not confirmed it carried out the strike.

Analysts say that Sunday's attack was more of a retaliation against last week's Israeli air strikes in Syria rather than an attack on the US.

“Iran had carried out attacks against American targets and did not shy away from publicising this,” said Hamidreza Azizi, Visiting Fellow at the German Institute for International and Security Affairs.

“I see this more as a warning sign to Israel and a show of force in the negotiations.”

A Kurdish spokesperson for the regional authorities said there were no flight interruptions at Erbil airport.

Residents of Erbil posted videos online showing several large explosions, and some said the blasts shook their homes. Reuters could not independently verify those videos.

Iraq has been rocked by chronic instability since the defeat of the Sunni Islamist group Islamic State in 2017 by a loose coalition of Iraqi, US-led and Iran-backed forces.

Since then, Iran-aligned militias have regularly attacked US military and diplomatic sites in Iraq, US and many Iraqi officials say. Iran denies involvement in those attacks.

If confirmed, the raid would mark an escalation in regional hostilities, with Saudi Arabia and Bahrain condemning ‘cowardly’ attack
World
6 months ago
Next Article