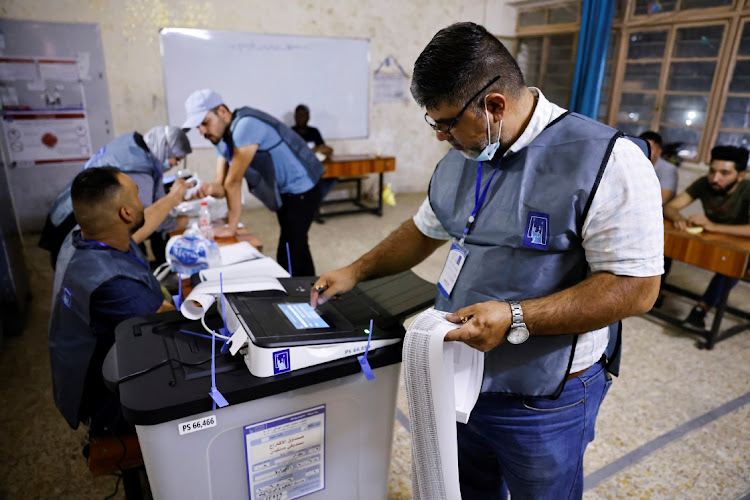 Baghdad  — Iraq on Sunday held a parliamentary election that drew one of the smallest turnouts on record, electoral officials indicated, a result that suggested dwindling trust in political leaders and the democratic system brought in by the 2003 US-led invasion.

The established, Shiite Islamist-dominated ruling elite whose most powerful parties have armed wings is expected to sweep the vote, with the movement led by populist Shiite cleric Moqtada al-Sadr, who opposes all foreign interference and whose main rivals are Iran-allied Shiite groups, seen emerging as parliament's biggest faction.

Such a result would not dramatically alter the balance of power in Iraq or the wider Middle East, say Iraqi officials, foreign diplomats and analysts, but for Iraqis it could mean that a former insurgency leader and conservative Islamist could increase his sway over the government.

In Baghdad’s Sadr City, a polling station set up in a girls’ school saw a slow but steady trickle of voters.

Election volunteer Hamid Majid said he had voted for his former schoolteacher, a candidate for the Sadrists. 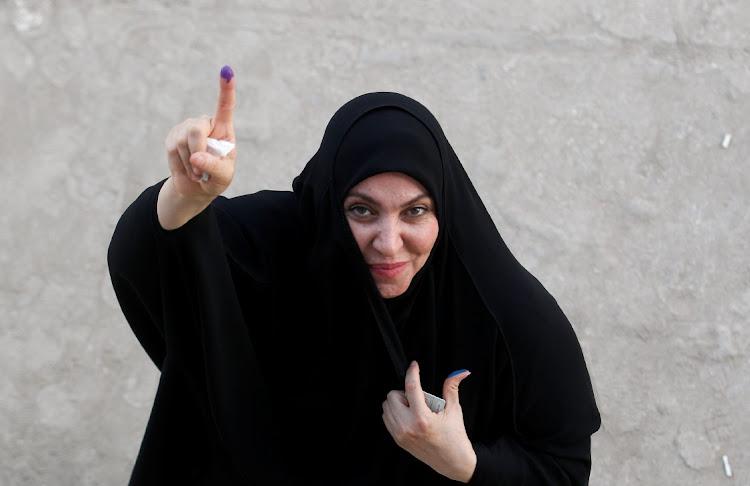 A woman shows her ink-stained finger after casting her vote at a polling station during the parliamentary election, in Najaf, in Iraq, October 10 2021. Picture: REUTERS/ALAA AL-MARJANI

“She educated many of us in the area so all the young people are voting for her. It’s the time for the Sadrist Movement. The people are with them,” Majid said.

Two electoral commission officials said nationwide turnout of eligible voters was 19% by midday. Turnout was 44.5% in the last election in 2018. Polling stations closed at 6pm.

It appeared to be the lowest turnout in any election since 2003, according to election commission counts at polling stations that Reuters visited across the country.

The election is being held several months early under a new law designed to help independent candidates — a response to mass antigovernment protests two years ago.

“I lost my 17-year-old son Hussain after he got killed by a teargas canister fired by police during Baghdad protests,” said al-Saadi, whose house is close to a polling station in the mainly Shiite Baghdad district of Karrada.

“I will not vote for killers and corrupt politicians because the wound inside me and his mother we suffered after losing our boy is still bleeding.”

Nonetheless, some Iraqis were keen to vote in what is Iraq’s fifth parliamentary vote since 2003 — and are hopeful of change. In the northern city of Kirkuk, Abu Abdullah said he arrived to vote an hour before polling stations opened.

“We expect the situation to improve significantly.” he said.

At least 167 parties and more than 3,200 candidates are competing for parliament’s 329 seats, according to the election commission. Iraqi elections are often followed by protracted talks over a president, a prime minister and a cabinet.

Prime Minister Mustafa al-Kadhimi is not running for election but the negotiations after the vote could yet see him get a second term. Kadhimi, who is viewed as Western-friendly, has no party to back him.

Kadhimi told reporters as he cast his ballot: “I call on Iraq people: there’s still time. Go out and vote for Iraq and vote for your future.”

Kadhimi's government called the vote early in response to protests in 2019 that toppled the previous administration.

Protesters’ demands included the removal of a ruling elite most Iraqis view as corrupt. The demonstrations were brutally suppressed and some 600 people were killed over several months.

Iraq is safer than it has been for years and violent sectarianism is less present since Iraq vanquished the Sunni ultra-hardline Islamic State in 2017 with the help of an international military coalition and Iran. But corruption and mismanagement has meant many of Iraq’s 40-million people lack jobs, healthcare, education and electricity.

“Why won't I vote? Because I have no faith in people. Those we elected, what have they done?," asked Mohammed Hassan, a resident of Basra. “Look at the garbage, the filth.... The previous government's projects, where are they?”

The US, Gulf Arabs and Israel on one side and Iran on the other compete to influence Iraq, which provides Tehran with a gateway to back armed allies in Syria and Lebanon.

The 2003 invasion toppled Saddam Hussein, a Sunni Muslim, and catapulted to power the country’s majority Shiites and the Kurds, who were oppressed under Saddam. It unleashed years of sectarian violence, including the takeover of a third of the country by Islamic State between 2014 and 2017.

Despite the public’s rejection of ‘forever wars’, the US will need to maintain military pressure on radical networks
World
9 months ago
Next Article