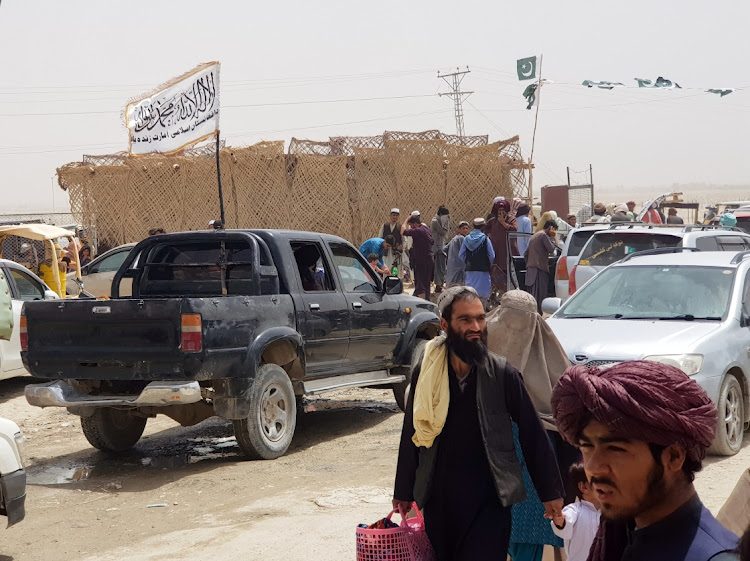 People arriving from Afghanistan walk as Pakistan and Taliban flags are seen in the background, at the Friendship Gate crossing point in the Pakistan-Afghanistan border town of Chaman, Pakistan, on August 17, Picture: REUTERS/ ABDUL KHALIQ ACHAKZAI

Thousands of Afghans struggling to ensure the physical safety of their families after the Taliban took control of the country have an additional worry: that biometric databases and their own digital history can be used to track and target them.

UN secretary-general Antonio Guterres has warned of “chilling” curbs on human rights and violations against women and girls, and Amnesty International said on Monday that thousands of Afghans — including academics, journalists and activists — are “at serious risk of Taliban reprisals”.

After years of a push to digitise databases in the country, and introduce digital identity cards and biometrics for voting, activists warn that these technologies can be used to target and attack vulnerable groups.

“We understand that the Taliban is now likely to have access to various biometric databases and equipment in Afghanistan,” the Human Rights First group wrote on Twitter on Monday.

“This technology is likely to include access to a database with fingerprints and iris scans, and include facial recognition technology,” the group added.

The US-based advocacy group quickly published a Farsi-language version of its guide on how to delete digital history — that it had produced last year for activists in Hong Kong — and also put together a manual on how to evade biometrics.

Tips to bypass facial recognition include looking down, wearing things to obscure facial features, or applying many layers of makeup, the guide said, though fingerprint and iris scans are difficult to bypass.

“With the data, it is much more difficult to hide, obfuscate your and your family’s identities, and the data can also be used to flesh out your contacts and network,” said Welton Chang, chief technology officer at Human Rights First.

It could also be used “to create a new class structure — job applicants would have their biodata compared to the database, and jobs could be denied on the basis of having connections to the former government or security forces”, he added.

The most “dire circumstance” would be to use the data to target anyone who was involved in the previous government, or worked in an international nonprofit, or was a human rights defender, he said.

Even five years ago, the Taliban was using government biometric systems to target members of the security forces, checking their fingerprints against a database, according to local media reports.

On Monday, just hours after the militants rolled into the capital, Kabul, there were fears that this was already happening.

A Kabul resident said in a private message that she had heard of house-to-house inspections, and that the Islamist militants were using a “biometrics machine”.

The Taliban has said it “assures all its citizens that it will, as always, protect their life, property and honour and create a peaceful and secure environment for its beloved nation”.

“We are also very concerned about databases retained by aid agencies and other groups, and alarmed that there is no clarity whether mitigation measures are being taken to either delete or purge information that can be used to target people,” he said.

The digital identity card, the tazkira, can expose certain ethnic groups, while even telecom companies have a “wealth of data” that can be used to track and target people, he added.

The responsibility to secure data systems was ultimately that of the Afghan government, said Chang, though the US forces and its allies probably had a role in “designing the systems in the first place and helping with implementation”.

“Likely not enough deliberate planning was done at the outset of creating, maintaining and turning over the system in terms of risk assessments and prevention of misuse,” he added.

Meanwhile, Afghans were doing what they could to scrub their digital profiles. Boys and men were “frantically going through phones to delete messages they have sent, music they’ve listened to & pictures they’ve taken”, BBC reporter Sana Safi wrote on Twitter on Sunday.

The international relations department says SA nationals in Afghanistan in need of help can e-mail islamabad.consular@dirco.gov.za or call 012-351-100
National
9 months ago