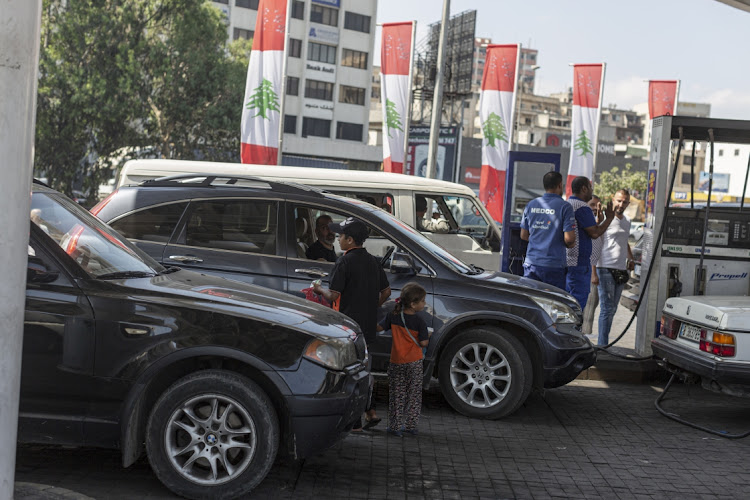 Children try to sell items to motorists who have queued for hours to fill up due to fuel shortages in Beirut, Lebanon, August 14 2021. Picture: SAM TARLING/GETTY IMAGES

Beirut — President Michel Aoun said on Monday he hoped a new Lebanese government would be formed within the next couple days, as efforts to agree on one were spurred on by a fuel crisis that has brought much of the country to a standstill and sparked warnings of anarchy.

The steadily worsening fuel crisis has marked a crunch point in Lebanon’s two-year-long financial meltdown, with shortages of imported fuel forcing hospitals, bakeries and businesses to scale back or shut down in the last week or so.

At least 28 people were killed over the weekend when a fuel tanker exploded as people desperate for petrol scrambled to get a share.

After meeting Aoun, prime minister-designate Najib Mikati said it was still possible for a government to be formed in the next two days. The issues were being tackled one-by-one, he said, though he did not know how the last would be resolved.

Ahead of his meeting with Mikati, Aoun indicated a deal was close, saying “we are about to form a government”, specifying later it would be “within a couple days, God willing”.

A senior political source said the government talks were “evolving positively” though some issues remained to be tackled, mainly the names of ministers.

Explaining the impetus, the source added: “The whole situation is deteriorating, the whole system is collapsing.”

Sayyed Hassan Nasrallah, the leader of the heavily armed, Iran-backed Shiite group Hezbollah, on Sunday urged the government to be formed in two or three days, saying this was the only way to prevent anarchy that had “already begun”.

He also said Hezbollah would begin bringing diesel and petrol from Iran with delivery dates to be announced soon.

US ambassador Dorothy Shea said the economy and basic services had “reached the precipice of collapse”.

“Every day that goes by without an empowered government committed to and able to implement urgently needed reforms is a day in which the already dire situation slides further into humanitarian catastrophe,” she said.

The culmination of decades of state corruption and mismanagement, the crisis entered a new phase last week when the central bank said it would no longer finance fuel imports at subsidised exchange rates.

With its currency reserves depleted, the bank has said new legislation is needed to allow use of the mandatory foreign reserve for such imports.

The government demanded prices be left unchanged. There has been no resolution to the stand-off.

The crisis has sunk the currency by more than 90% and sent more than half the population into poverty.

The Lebanese pound has strengthened since Aoun first signalled optimism on Sunday about the formation of a government.

The ruling elite has failed to agree a rescue plan, or to form a new government since Prime Minister Hassan Diab’s cabinet quit last August after the Beirut port explosion.

Mikati, a businessman-politician, was designated to form the government after Sunni leader Saad al-Hariri abandoned his attempts, saying he could not agree with Aoun. Each blamed the other.