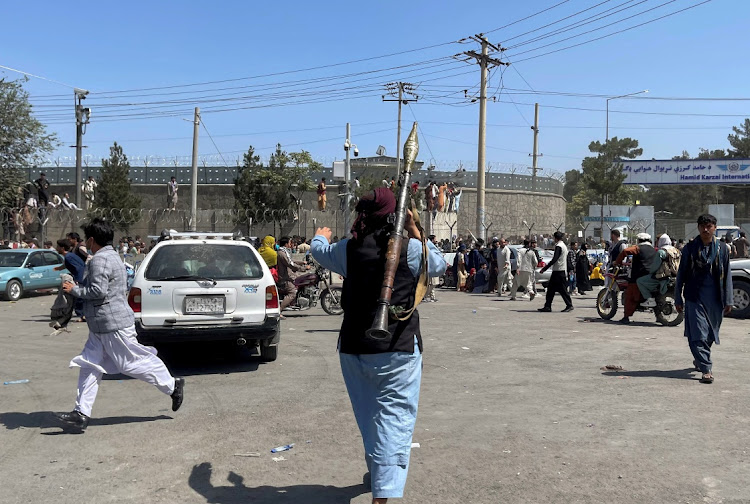 A member of Taliban forces inspects the area outside Hamid Karzai International Airport in Kabul, Afghanistan, on August 16 2021. Picture: REUTERS/STRINGER

Kabul —  Thousands of civilians desperate to flee Afghanistan thronged Kabul airport’s single runway on Monday after the Taliban seized the capital, prompting the US to suspend evacuations as President Joe Biden faced mounting criticism over the US withdrawal.

Crowds converged on the airport seeking to escape, including some clinging to a US military transport plane as it taxied on the runway, according to footage posted by private Afghan broadcaster Tolo news.

US troops fired in the air to deter people trying to force their way on to a military flight evacuating US diplomats and embassy staff, a US official said.

Five people were reported killed in the chaos. A witness said it was unclear if they had been shot or killed in a stampede. A US official said two gunmen had been killed by US forces there over the past 24 hours.

A Pentagon spokesperson said there were indications that one US soldier was wounded.

The first of three German evacuation aircraft diverted to the Uzbek capital, Tashkent, because it could not land in Kabul, which lies in a valley surrounded by mountains. A second aircraft circled over the city.

The Taliban’s rapid conquest of Kabul followed Biden’s decision to withdraw US forces after 20 years of war that he described as costing more than $1-trillion.

The speed at which Afghan cities fell, in days rather than the months predicted by US intelligence, and fear of a Taliban crackdown on freedom of speech and human rights, especially women’s rights, have sparked criticism.

In a televised address on Monday afternoon, Biden said he did not regret his decision, insisting he had had to decide between asking US forces to fight endlessly in what he called Afghanistan’s civil war or follow through on an agreement to depart negotiated by former Republican former president Donald Trump.

“I know my decision will be criticised but I would rather take all that criticism than pass this decision on to another president of the US,” Biden said.

Biden said the mission of the US was never supposed to be nation-building as he blamed the Taliban’s takeover of Afghanistan on Afghan political leaders who fled the country and the unwillingness of the Afghan army to fight the militant group.

"I stand squarely behind my decision," Biden said. "After 20 years I've learned the hard way that there was never a good time to withdraw US forces. That’s why we’re still there.

"The truth is: this did unfold more quickly than we anticipated. So what’s happened? Afghanistan political leaders gave up and fled the country. The Afghan military gave up, sometimes without trying to fight," Biden said.

The Democrat has faced a barrage of criticism, from even his own diplomats,  over his handling of the US exit, pulling out troops and then sending back thousands to help with the evacuation.

“Afghanistan is lost ... every terrorist around the world is cheering,” Republican Senate minority leader Mitch McConnell told reporters in his home state of Kentucky.

Ben Wallace, defence secretary of usually staunch US ally Britain, said earlier on Friday that the 2020 Doha withdrawal accord struck with the Taliban by Trump was a “rotten deal”.

The UN Security Council called for talks to create a new government in Afghanistan after secretary-general Antonio Guterres warned of “chilling” curbs on human rights and violations against women and girls.

French President Emmanuel Macron urged the UN to act with a single voice.

Pentagon spokesperson John Kirby said US forces were working with Turkish and other international troops to clear Kabul airport to allow international evacuation flights to resume. He said several hundred people had been flown out so far.

Kirby, speaking at a news briefing in Washington, said defense secretary Lloyd Austin had authorised the deployment of another battalion to Kabul that would bring the number of troops guarding the evacuation to about 6,000.

Suhail Shaheen, a spokesperson for the Taliban, said in a message on Twitter that the group’s fighters were under strict orders not to harm anyone.

“Life, property and honour of no-one shall be harmed but must be protected by the mujahideen,” he said.

It took the Taliban just over a week to seize control of the whole country after a lightning sweep that ended in Kabul as government forces, trained for years and equipped by the US and others, melted away.

US officers had long worried that corruption would undermine the resolve of badly paid, ill-fed and erratically supplied front line soldiers.

Hundreds of Afghan soldiers fled to Uzbekistan with 22 military aeroplanes and 24 helicopters at the weekend, including one aircraft that collided with an escorting Uzbek fighter jet, causing both to crash, Uzbekistan said.

Russian foreign minister Sergei Lavrov and US  secretary of state Antony Blinken discussed Afghanistan by phone and agreed to continue talks with China, Pakistan and the UN, Russia said.

Mohammad Naeem, spokesperson for the Taliban’s political office, told Al Jazeera TV the form of Afghanistan’s new government would be made clear soon. He said the Taliban did not want to live in isolation.

But many Afghans fear the Taliban will return to past harsh practices. During their 1996-2001 rule, women could not work and punishments such as public stoning, whipping and hanging were administered.

“As far as I am concerned, Afghanistan will become a caliphate and a refuge for Islamic forces,” said Andreas Eggert, state chair of the Federal Association of German Veterans, who served in Afghanistan. “And, before long, we will see the same situation we saw 20 years ago.”