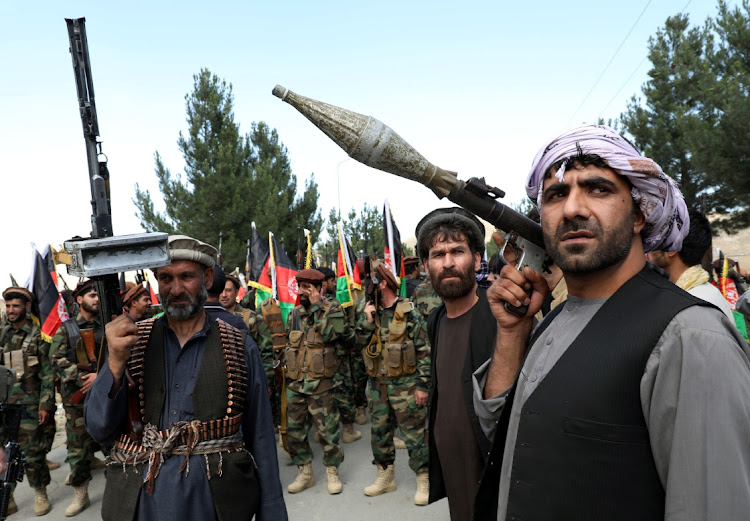 Armed men attend a gathering to announce their support for Afghan security forces and that they are ready to fight against the Taliban, on the outskirts of Kabul, Afghanistan, in this photo taken on June 23 2021. Picture: REUTERS

Kabul —  Afghanistan’s third-largest city, Herat, fell under  Taliban control on Thursday amid heavy fighting, as the militant group also established a bridgehead within 150km of Kabul.

The group claimed control over Herat and, in what would be its most significant two victories since it began cutting a swathe through the country in May, also appeared close to capturing Kandahar, a diplomatic source said.

Kandahar is Afghanistan's second largest city and the spiritual home of the Taliban, which now control about two-thirds of the country.

Two US officials said the state department was expected to announce that a significant number of employees from the US embassy in Kabul would be relocated as the Taliban press their advance.

They said the US military would help with the relocation, leading to some additional forces in the country temporarily, just under three weeks before the last of the US-led international force are due to pull out.

It was not yet clear if the embassy staff would be relocated in or outside Afghanistan. The militants’ swift advances prompted the US and Germany to urge their citizens to leave the country immediately.

The US embassy said that given security conditions and reduced staffing, its “ability to assist US citizens in Afghanistan is extremely limited even within Kabul”, according to a notice on its website.

Britain’s defence secretary Ben Wallace said on Thursday troops will be deployed to Afghanistan to help British nationals and local translators get out of the country. The British embassy in Kabul will be moved to a more secure location and will remain manned by only a core staff.

Kandahar and other southern and eastern areas bordering Pakistan have long been Taliban heartlands, while Herat is on the other side of the country near the border with Iran.

“As you can see, we are inside the Herat police headquarters right now,” a Taliban fighter said in a video shared by the group's spokesperson, Qari Yousuf Ahmadi.

Ahmadi later said the Herat governor's office had been taken, and government forces were surrendering.

If its capture is confirmed, Herat would the tenth provincial capital — and the most significant — that the Taliban have taken in the past week.

In Kandahar, most parts of the city were under the group's control but fighting was still going on, a Taliban commander told Reuters.

Earlier on Thursday the Taliban captured Ghazni, situated on the Kandahar to Kabul road about 150km southwest of the capital.

With phone lines down across much of the country, Reuters was unable to contact government officials to confirm which of the cities under attack remained in government hands.

On Wednesday, a US defence official cited US intelligence as saying the Taliban could isolate Kabul in 30 days and possibly take it over within 90.

The speed and violence of the Taliban offensive have sparked recriminations among many Afghans over President Joe Biden's decision to withdraw US troops and leave the government to fight alone.

President Ashraf Ghani flew to northern Mazar-i-Sharif on Wednesday to rally old warlords he had previously tried to sideline, now needing their support.

Al Jazeera reported a government source saying it had offered the Taliban a share in power, as long as the violence comes to a halt.

Afghan government spokespeople were not immediately available for comment and it was not clear to what extent the reported offer differed from terms already discussed at stalled talks in Qatar.

Taliban spokesperson Zabihullah Mujahid said he was unaware of any such offer but ruled out sharing power.

“We won't accept any offer like this because we don’t want to be partner with the Kabul administration. We neither stay nor work for a single day with it,” he said.

In a deal struck with the US in 2020, the insurgents agreed not to attack US-led foreign forces as they withdraw. The Taliban also made a commitment to discuss peace.

But intermittent talks with representatives of the US-backed government have made no progress, with the insurgents apparently intent on a military victory.

UN spokesperson Stephane Dujarric said on Thursday he hoped that talks this week in Doha would “restore the pathway to a negotiated settlement to the conflict”.

The UN said more than 1,000 civilians had been killed in the past month. On Wednesday, the Taliban denied targeting or killing civilians and called for an investigation.

The group, which ruled the country from 1996-2001, said it had seized airports outside the cities of Kunduz and Sheberghan in the north and Farah in the west, making it even more difficult to supply government forces.

The EU recently announced billions of euros in additional financing to support Turkey for hosting refugees under a programme designed to prevent ...
World
2 months ago
Next Article