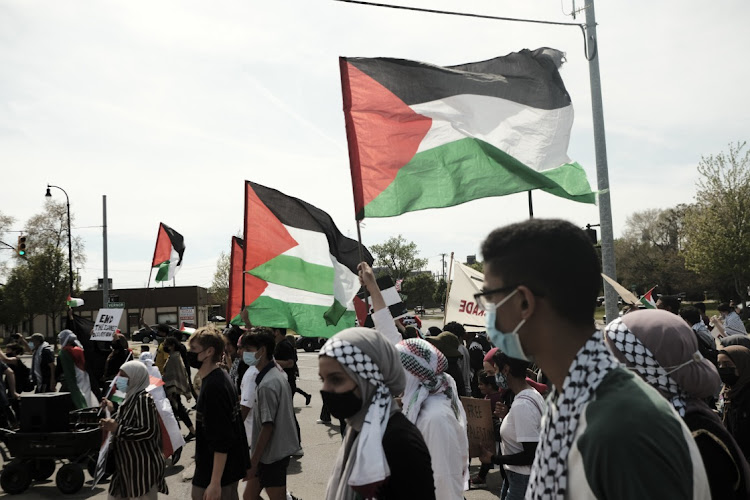 Pro-Palestinian supporters wave flags while marching during a protest against the Israel-Hamas crisis in Dearborn, Michigan, US, in this May 18 2021 file photo. President Joe Biden told prime minister Benjamin Netanyahu he’d support a cease-fire between Israel and Hamas after days of calling for calm but not publicly seeking an end to the conflict, a shift in the US approach to the crisis following days of rising criticism. Picture: BLOOMBERG/MATTHEW HATCHER

Israeli aircraft pounded targets across the Hamas-ruled Gaza Strip on Thursday, and Palestinian militants renewed intense rocket barrages on southern Israel, as the sides tried to consolidate gains ahead of a possible ceasefire.

Prime Minister Benjamin Netanyahu is to convene Israel’s security cabinet at 7pm to discuss a possible cessation of hostilities, an Israeli official said on condition of anonymity to discuss the government’s plans. Israel’s Channel 13, citing an unidentified Hamas official, said the truce was scheduled to begin at 1pm Friday.

The reports dovetailed with comments by Hamas deputy chief Moussa Abu Marzouk, who was cited on the website of Lebanon’s Al-Mayadeen TV on Wednesday as saying that he expects that “a ceasefire will be reached within a day or two.” Tel Aviv stocks and the shekel gained amid the truce talk.

Reports of a pending ceasefire have circulated before, but this time, they follow more intense US pressure on Israel to dial back an onslaught that has killed about 230 Palestinians since it began May 10. President Joe Biden’s reluctance to publicly press Israel to end its attacks had set him on a collision course with Democratic congressional allies who wanted him to be more forceful. On Wednesday, he told Netanyahu he expected a “significant de-escalation” that very day.

But the Israeli leader rebuffed the squeeze, and declared himself determined to continue the operation until quiet and security are restored to Israel, where 12 people have died in relentless rocket assaults.

Israeli aircraft hammered weapons warehouses, rocket launchers, homes of Hamas officials and the group’s network of underground tunnels, used for combat and logistics. Palestinians also reported that two men were killed in an air strike on a car. Gaza rocket squads halted their fire for about eight hours before resuming their bombardments mid-morning Thursday.

The violence erupted after weeks of clashes between Palestinians and Israeli security forces in Jerusalem, the holy city at the heart of conflicting sovereignty claims. Hamas fired rockets in Jerusalem’s direction after Israeli security forces stormed a Muslim shrine in east Jerusalem and Israel prepared to evict longtime Palestinian residents from homes in the city’s eastern sector.

The rocket fire towards Jerusalem crossed what Israel called a “red line,” and its military embarked upon an operation that’s delivered a harsher blow to the militants’ capabilities than ever before. The violence also spilt over into deadly clashes between Arabs and Jews inside Israel, and between Israeli security forces and Palestinians in the West Bank.

While ordinary Palestinians and Israelis have suffered, leaders on both sides emerge from the conflict in a stronger position. The conflict has hollowed out Netanyahu’s rival’s efforts to form a government to unseat him as prospective partners in an alternative coalitions retreated to sectarian camps.

Mediation continues, with US President Joe Biden urging a de-escalation in fighting and the UN due to meet on the conflict
World
3 weeks ago