Residents in Acre, a mixed Arab and Jewish city, say they are frightened to leave home amid reports of youths attacking each other 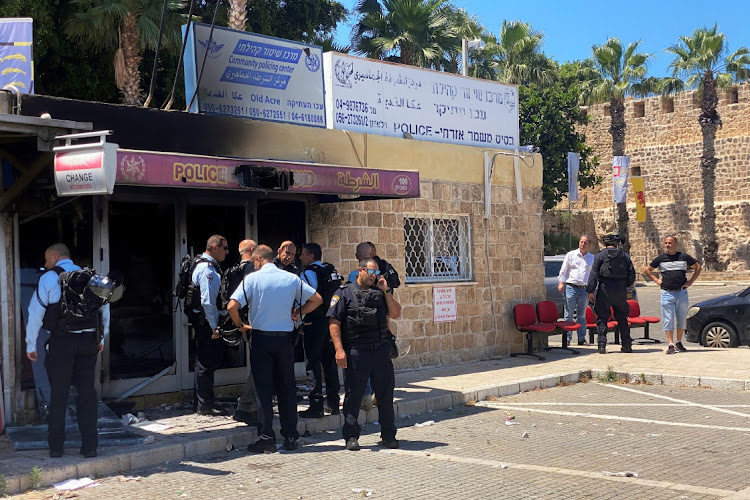 Israeli policemen gather as they inspect a partially torched police station in the Arab-Jewish mixed coastal city of Acre, Israel on May 13 2021. Picture: REUTERS/RAMI AYYUB

Acre — In the mixed Arab and Jewish city of Acre, the holiday festival of Eid al-Fitr that marks the end of Ramadan would normally see families mingling freely and taking their children to fairs and on boat rides along the coast.

But fear and mistrust pervaded the Israeli port’s nearly deserted centre on Thursday, as one resident issued a warning not to speak Hebrew in the old part of the city and a second demanded to see a third’s identity papers.

Often held up as an example of Arabs and Jews living alongside each other in relative calm, Acre is an ancient city on the Mediterranean coast with two other names — Akko in Hebrew, and Akka in Arabic.

That coexistence has been shattered by the escalating rocket fire and air and artillery strikes between Israel and Gaza that have inflamed cross-communal violence nationwide between Israel’s Jewish majority and its 21% Arab minority.

“They say Gaza is spiralling out of control, but what is happening here scares me more,” said Majd Abado, an Arab resident of Acre.

Amid reports of Arab and Jewish youths attacking each other that Reuters could not immediately confirm, more than half a dozen Acre residents said they were frightened to leave home for fear they would be mistaken for an Arab, or for a Jew.

On Tuesday, protesters torched a police station in the city and smashed its windows. On Thursday, in an apparent show of force, several dozen police in riot gear marched past a Crusader-era fort towards the station to inspect the damage.

A popular theatre that puts on shows in both Arabic and Hebrew said it had cancelled all planned performances this week due to the violence.

“We are living together here, Jews and Arabs, with good relations,” said Moni Yosef, 63, of the Acco Theatre Center. “This theatre [employs] Jews, Arabs, Christians, Muslims, Druze, like a family. And [when] someone [causes] trouble from the outside, it affects all of us.”

Pleas by religious leaders have done little to head off the fighting in this and other towns in an outbreak of strife that Israel’s president has lamented as a “senseless civil war”.

Tensions had risen in the Arab community in recent weeks, fuelled by the threat of Palestinian evictions in East Jerusalem and police raids on Al-Aqsa Mosque, the third holiest site in Islam after Mecca and Medina.

But they have escalated dramatically since Hamas launched rockets at Israel and Israel struck back with air and artillery bombardments on Gaza, in violence that has killed at least 83 Palestinians and seven Israelis this week.

Mostly peaceful night protests by Arabs turned angry, with some torching cars, police stations and a synagogue, and mobs of Jews attacked Arabs in their cars or on the street.

In a refrain repeated by many in the city of 55,000, about 30% of whom are Arab, Acre's Abado blamed the violence there on outsiders and small groups of youths.

“Ninety-nine percent of people here are against this,” he said.

Israel’s Arab minority is mostly descended from Palestinians who lived under Ottoman and then British colonial rule, remaining in what became Israel when the country was created in 1948.

Muslim, Druze or Christian, most are bilingual in Arabic and Hebrew, and feel a sense of kinship with Palestinians in the occupied West Bank and the Gaza Strip.

This kinship, and the fact that most do not serve in the Israeli military, leads some Israelis to view them with suspicion, especially on the far right.

Despite holding Israeli citizenship, many say their communities, from the fertile Galilee in the north to the Negev desert in the south, face discrimination in areas such as education and housing.

Acre’s history dates back some 4,000 years. Its walled old city bears remnants of its long past, including a towering, green-domed mosque.

The old city today is inhabited mainly by Arabs, while Jews dominate in its modern suburbs.

Down an old alley from the Al-Jazzar Mosque, Arab residents were surveying damage to a historic Turkish bathhouse that was torched overnight and had its front doors ripped to the ground.

As a single man approached, the three residents, two of them youths, asked in Hebrew to see the man’s ID. The man declined, saying in Arabic that he was Arab, and went on his way.

It was not clear how widespread such requests were.

Another man warned a Reuters correspondent “not to speak in Hebrew in the old city ... just say ‘as-salamu alaykum’” — 'Peace be upon you' in Arabic.

Arab media commentators say the unrest may have been sparked by events in Jerusalem, but that it goes deeper.

Disaffection increased in 2018 when Prime Minister Benjamin Netanyahu’s government passed a “nation-state” law that, many Arabs said, reduced them to second-class citizens by giving Jews “exclusive right to national self-determination” in Israel.

It stipulated: “Israel is the historical homeland of the Jewish people and they have an exclusive right to national self-determination in it”.

Urging a restoration of calm on Thursday, Sami Abou Shahadeh, an Arab legislator in Israel’s parliament, wrote on Twitter: “The violence being directed against Jewish citizens, and against Palestinian citizens by extremist organisations, and which is not being addressed by law enforcement, is a red line that requires immediate resolution and international intervention.”

The Israeli prime minister is poised to ask another candidate to try form a government, inviting two of his top opponents for talks
World
4 months ago
Next Article