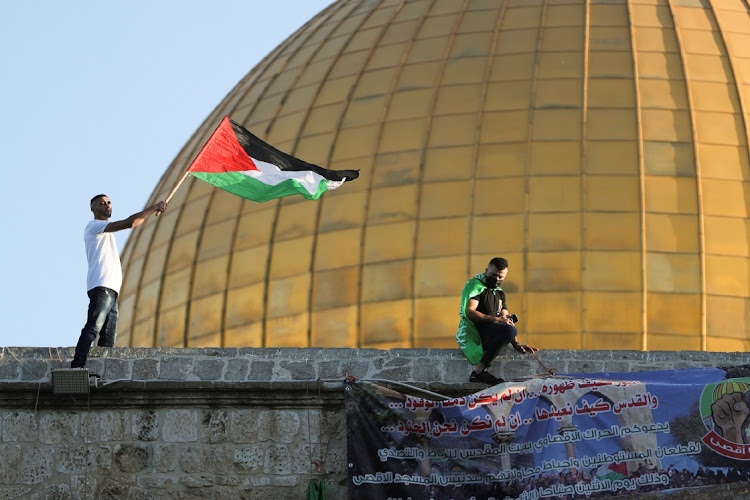 A youth waves a Palestinian flag as the Dome of the Rock is seen in the background, during Eid al-Fitr prayers, which marks the end of the holy fasting month of Ramadan, at the compound that houses al-Aqsa mosque, known to Muslims as Noble Sanctuary and to Jews as Temple Mount, in Jerusalem's Old City, amid Israel-Gaza fighting on May 13 2021. Picture: REUTERS/AMMAR AWAD

Gaza/Jerusalem — Israel was preparing ground troops along the Gaza border on Thursday and Hamas launched rocket barrages at southern Israel as the fiercest hostilities in years dragged on with no end in sight.

Sirens blared in Tel Aviv overnight and the sound of rockets being shot down by Israel’s Iron Dome system filled the sky, sending thousands of Israelis to shelters.

By dawn on Thursday, Israel had renewed its air strikes on the Palestinian coastal enclave, destroying a six-storey residential building in the middle of Gaza City.

As world powers reiterate calls for calm, a wave of violence between Jewish Israelis and the country's Arab minority has continued to spread in several Israeli cities, with attacks on synagogues and Arab-Jewish fighting in the streets.

Israel has prepared combat troops along the Gaza border and was in “various stages of preparing ground operations”, a military spokesperson said, a move that would recall similar incursions during Israel-Gaza wars in 2014 and 2008-2009.

“The chief of staff is inspecting those preparations and providing guidance ... we have a division headquarters and three manoeuvre brigades down in Gaza preparing themselves for that situation and for various contingencies,” Lt-Col Jonathan Conricus said.

Health authorities in Gaza said they were investigating the deaths of several people overnight who they said may have inhaled poisonous gas. Samples were being examined and they had yet to draw any final conclusions, they said.

Amid fears the violence could spiral further out of control, Washington planned to send an envoy, Hady Amr, for talks with Israel and Palestinians.

“My expectation and hope is this will be closing down sooner than later, but Israel has a right to defend itself,” Biden said on Wednesday after speaking to Israeli Prime Minister Benjamin Netanyahu. Biden did not explain the reasons behind his optimism.

Netanyahu’s office said he told the US president that Israel would “continue acting to strike at the military capabilities of Hamas and the other terrorist groups active in the Gaza Strip”.

On Wednesday, Israeli forces killed a senior Hamas commander and bombed several buildings, including high-rises and a bank, which Israel said was linked to the faction's activities.

Hamas signalled defiance, with its leader, Ismail Haniyeh, saying: “The confrontation with the enemy is open-ended.”

Israel launched its offensive after Hamas fired rockets at Jerusalem and Tel Aviv in retaliation for Israeli police clashes with Palestinians near al-Aqsa mosque in East Jerusalem during the fasting month of Ramadan.

These escalated ahead of a court hearing — now postponed — that could lead to the eviction of Palestinian families from East Jerusalem homes claimed by Jewish settlers.

For Israel, the targeting of Tel Aviv and Jerusalem posed a new challenge in the confrontation with Hamas, regarded as a terrorist group by Israel and the US.

A Palestinian source said truce efforts by Egypt, Qatar and the UN had made no progress to end the violence.

US secretary of state Antony Blinken phoned Palestinian President Mahmoud Abbas and said Washington “was exerting efforts with all relevant parties to reach calm,” the official Palestinian news agency WAFA said. Abbas is a Hamas rival whose authority is limited to the Israeli-occupied West Bank.

The fighting has also touched off strife within Israel, where some in the Arab minority mounted violent pro-Palestinian protests.

Media reported spreading street attacks by Jews on Arab passers-by in ethnically mixed areas on Wednesday and in the early morning hours on Thursday. Residents of towns including the coastal city of Acre, in northern Israel, said they feared leaving home.

In Gaza, two multistorey residential buildings and a tower housing media outlets, including one linked to Hamas, collapsed after Israel urged occupants to evacuate in advance of its air strikes, and another structure was heavily damaged.

“Israel has gone crazy,” said a man on a Gaza street, where people ran out of their homes as explosions rocked buildings.

Many in Israel also holed up in shelters as waves of rockets hit its heartland, some blown out of the sky by Iron Dome interceptors.

“All of Israel is under attack. It's a very scary situation to be in,” said Margo Aronovic, a student in Tel Aviv.

The fatalities in Israel include a soldier killed while patrolling the Gaza border and civilians, including an Indian worker, medical authorities said.

The Israeli military said on Thursday that about 400 of 1,600 rockets fired by Gaza factions had fallen short, potentially causing some Palestinian civilian casualties.

The conflict has led to the freezing of talks by Netanyahu's opponents on forming a governing coalition to unseat him after Israel's inconclusive March 23 election.

Although the latest problems in Jerusalem were the immediate trigger for hostilities, Palestinians have been frustrated as their aspirations for an independent state have suffered setbacks in recent years.

These include Washington’s recognition of disputed Jerusalem as Israel’s capital, a US plan to end the conflict that they saw as favourable to Israel and continued settlement building.

‘We have lost control of the city and the streets,’ Lod mayor after several nights of violent confrontations between Arab and Jewish Israelis
World
5 months ago