Most militaries try to protect civilians — Hamas’s actively exploits them 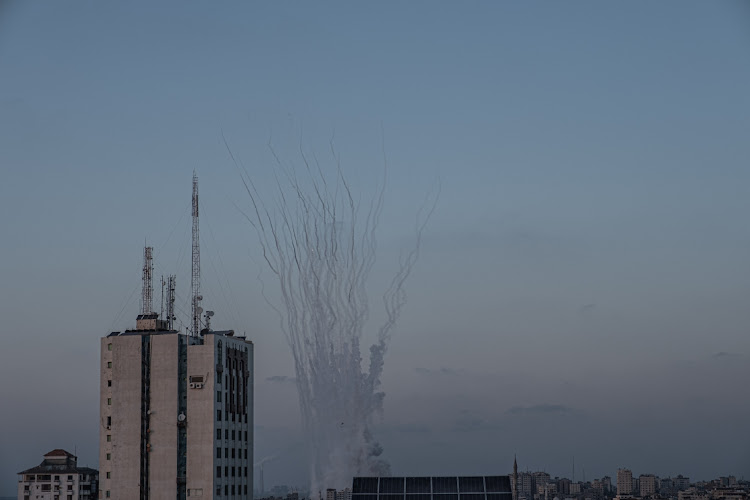 Rockets are launched towards Israel from north Gaza, controlled by the Palestinian Hamas movement, on May 12 2021 in Gaza City, Gaza. At least three dozen Palestinians and five Israelis have been killed in the cross-border exchange of rockets and aerial bombardment, which followed a series of violent confrontations between Israeli police and Palestinian protesters in East Jerusalem. Picture: GETTY IMAGES/FATIMA SHBAIR

According to its exiled political leader, Hamas’s war strategy — if that’s the proper term for raining hundreds of randomly fired rockets on Israel — is working. In a televised address on Tuesday evening, Ismail Haniya called the barrage a “victory” and “an honour for our people.”

This rhetoric is not unusual. Hamas always claims to win the wars it loses. In 2012, after suffering a humiliating defeat to Israel, a popular perfume appeared in a shop in Gaza named for the Hamas missile that reached Tel Aviv. The shop owner said it commemorated a military “victory” that left much of Gaza in shambles.

This time around, the Hamas offensive makes even less military sense. Israel in 2021 has a very effective missile and rocket defense system that has intercepted most of Hamas’s rockets in midair. While a few have gotten through, the rockets do not seem to be breaking the will of the Israeli people. Indeed, the short-term consequence of the Hamas escalation has been to unify an Israeli government that was unraveling behind its polarising prime minister, Benjamin Netanyahu.

Hamas is clearly hoping to leverage the images of Israel’s counterattack in Gaza against its adversary after the fighting stops. This too follows a pattern. Following a war in 2008 and 2009, the UN Human Rights Council formed a special commission to study war crimes on both sides. Hamas and Israel were both found to have committed atrocities, a penalty that means nothing to a terrorist organisation. Hamas lost the military battle, but it won a public-relations war to further delegitimise Israel.

This helps explain why Hamas can claim that Israel is starving Palestinians with its tight control of the Gaza border, yet also devote money and resources to build imprecise rockets and missiles to launch at Israel every few years. It also explains why Hamas hides its weapons and ammunition in schools and mosques. Most militaries try to protect civilians. Hamas’s actively exploits them.

This is a fact that appears to be lost on the International Criminal Court, for which the escalation of violence raises the prospect of possible war crimes.

By contrast, it is a fact very much on the mind of Israel’s most important ally. Asked about the disparity in casualties of Israelis and the Palestinians US secretary of state Antony Blinken said on Wednesday: “There is first a very clear and absolute distinction between a terrorist organisation, Hamas, that is indiscriminately raining down rockets — in fact, targeting civilians — and Israel’s response defending itself that is targeting the terrorists who are raining down rockets on Israel.”

No Arab leaders or diplomats have gone that far in their public statements, though a US official told me this week that the message from regional allies has been muted. This also makes sense. In 2020, Israel signed peace agreements with four Arab states that share a common enemy in the region: Iran, which also happens to be one of the most important patrons of Hamas. Hamas is also the Palestinian chapter of the Muslim Brotherhood, an organisation that Israel’s new Arab friends consider a threat.

Twenty years ago, Palestinian provocations and Israeli counterattacks were enough to spoil and strain America’s relationship with its Arab allies. In 2001, Saudi Arabia’s ambassador to Washington famously delivered a warning to the George W Bush administration that if it did not take a more even-handed role in the Israeli-Palestinian conflict, then Saudi Arabia would reassess its relationship with the US.

In 2021, the Saudis are more worried about nations that support Hamas than about Israel’s response to Hamas. And even a new US administration that seeks a nuclear deal with Iran doesn’t accept the idea of moral equivalence between the sovereigns of Gaza and the Jewish state.

That raises again the question of what exactly is Hamas’s strategy. Ismail Haniya’s comments notwithstanding, Hamas is not winning. Nor is it weakening Israelis’ resolve. The only thing Hamas is spoiling is the prosperity and security of the Palestinian people.

‘We have lost control of the city and the streets,’ Lod mayor after several nights of violent confrontations between Arab and Jewish Israelis
World
1 month ago
Next Article