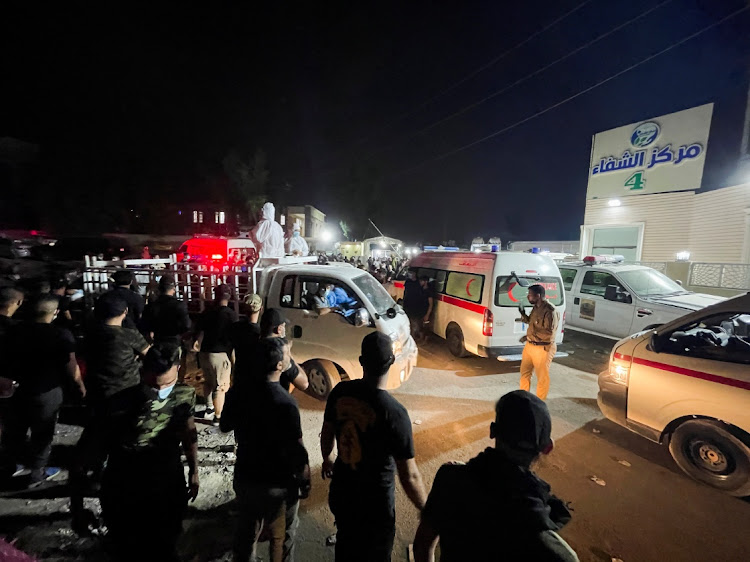 Baghdad —  A fire caused by an oxygen tank explosion at a Covid-19 hospital in Baghdad took at least 82 lives and forced some people to leap through windows out of the burning building, witnesses and authorities said on Sunday.

About  110 people were also injured, interior ministry spokesperson Khalid al-Muhanna said. Most of the dead and injured were patients.

Already decimated by war and sanctions, Iraq's health-care system has struggled to cope with the coronavirus crisis, which has officially killed 15,257 people and infected more than 1-million.

Security forces cordoned off the hospital, in the Diyala Bridge area of the Iraqi capital, where charred debris and shattered glass littered the ground outside.

As the flames spread on Saturday, relatives scrambled to save loved ones, with some jumping to safety.

“I carried my brother out to the street. Then I came (back) and went up to the last floor which wasn't burning. I found a girl suffocating, about 19 years old ... she was about to die,” Ahmed Zaki said. “I took her on my shoulders and I ran down ... Doctors jumped onto the cars. Everyone was jumping.”

While many surviving patients were moved to other hospitals, several families were still outside the Ibn Khatib hours after the blaze was extinguished, still looking for relatives.

An emergency cabinet meeting called by Kadhimi ordered an investigation with findings due in five days.

The governor of Baghdad and another senior health ministry official were also suspended and referred to investigators.

“Such an incident is evidence of negligence and therefore I directed that an investigation be launched immediately,” the prime minister said in a statement, adding that the hospital's manager and heads of security and maintenance had been detained.

Weary of political violence, Iraqis also suffer frequent accidents due to underinvestment, corruption and wrecked infrastructure. During the coronavirus crisis, hospitals have been struggling from an influx of patients and short supplies.

Hospitals overwhelmed as number of cases rises by 349,691 on Sunday
World
1 week ago

African countries urged not to destroy vaccines after expiry confusion

YACOOB ABBA OMAR: Survey highlights the poser that Iran is amid byzantine US ...

YACOOB ABBA OMAR: Survey highlights the poser that Iran is amid byzantine US ...