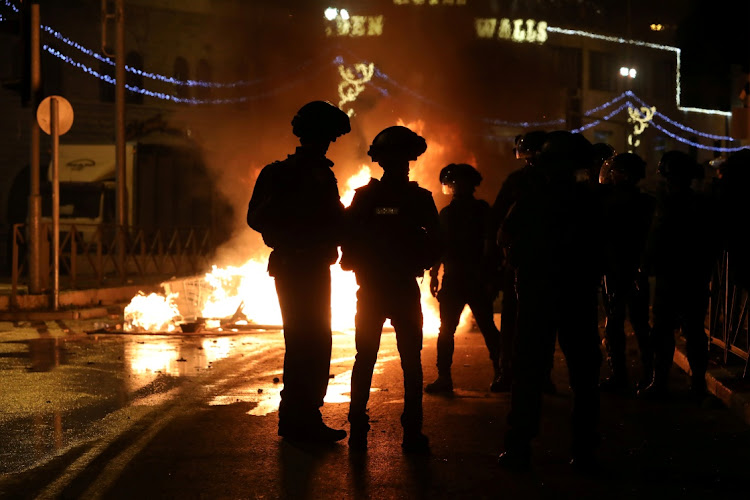 Israeli police officers stand next to a burning barricade during clashes with Palestinians, as the Muslim holy fasting month of Ramadan continues, in Jerusalem, April 22 2021. Picture: REUTERS/AMMAR AWAD

Jerusalem — After a night of violence in Jerusalem, Israeli police made more than 50 arrests and Palestinian medics said 100 were injured during Ramadan clashes in the contested city at the core of the Israeli-Palestinian conflict.

Clashes and other violent incidents between Palestinians and Israelis have occurred nightly since the start of the Muslim fasting month of Ramadan. Palestinians say police have tried to prevent them from holding their usual Ramadan evening gatherings outside Damascus Gate, a historic landmark on the north side of the Old City and adjacent to several Palestinian neighbourhoods.

The incidents have threatened to break a sustained period of relative quiet in the holy city.

On Thursday night, hundreds of ultra-nationalist Israelis — many of them young and religious — marched through central Jerusalem towards the Damascus Gate, which police had barricaded as a precaution. As they marched, many chanted “Death to Arabs” and some waved banners reading: “Death to terrorists”.

One man participating in the march, David, said he lived far from Jerusalem but “came here to support my own people ... I’m Jewish and I’m a patriot and I’m proud of my country.”

Police on horseback fired skunk water at the Israelis, pushing them away from their position at the Old City’s New Gate — just 600m away from Palestinians gathered at Damascus Gate — and towards Jerusalem’s central Jaffa Road.

As Palestinians heard reports of the Israeli crowd approaching, they gathered in their thousands near Damascus Gate with ambulances racing up and down the crowded backstreets with their sirens blaring.

Hundreds of Israeli police in riot gear sealed off the area to prevent the Israeli and Palestinian crowds from potentially meeting, creating a 50m no-man’s land between themselves and the group of Palestinian youths.

The Palestinians dragged garbage bins, some of them ablaze, into the roads on their side to disrupt police and block them from their side. Some discharged small fireworks towards police.

In all, police said they arrested over 50 people overnight, without distinguishing between Israelis and Palestinians. The Palestine Red Crescent said 100 Palestinians had been injured in clashes with police, with 21 taken to hospital for treatment but none of them serious.

The Palestinian clashes with Israeli police began with the start of Ramadan, on April 13. Palestinians say police have tried to prevent them from holding their usual Ramadan evening gatherings outside Damascus Gate.

“Palestinians love to relax in this area after evening prayers at Al-Aqsa Mosque, but the occupation [Israel] doesn’t like it. It’s a matter of sovereignty,” said Jerusalem resident Mohammad Abu Al-Homus, pointing to metal barricades thrown up by police in the area in recent weeks.

Police say the measure is part of its efforts to ensure that tens of thousands of Muslim worshippers have safe access to the main Islamic prayer site in the Old City, known as the Noble Sanctuary.

“Since Damascus Gate is the main way to reach and enter the Old City, police forces carry out field activities using various means to prevent friction, violence and confrontation, and to maintain order and security in the area,” said a police spokesperson.

Health officials say about 70% of intensive-care beds are occupied, up from 37% at the end of March
World
2 weeks ago

After a fourth inconclusive election in two years, there is no guarantee that Netanyahu will succeed in unblocking the political stalemate
World
1 month ago

LETTER: Two apartheid states and their crises of legitimacy