After a fourth inconclusive election in two years, there is no guarantee that Netanyahu will succeed in unblocking the political stalemate 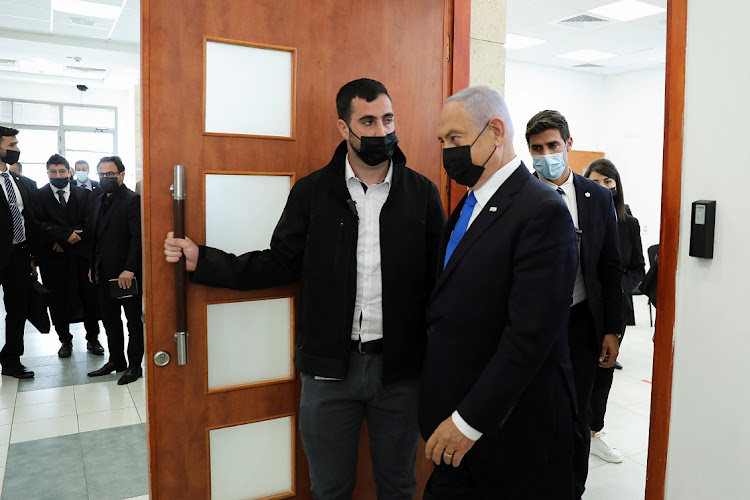 Israeli prime minister Benjamin Netanyahu, wearing a face mask, leaves the courtroom during a hearing as his corruption trial resumes, at Jerusalem's district court on April 5 2021. Picture: SULTAN/POOL via REUTERS

Jerusalem — Israeli Prime Minister Benjamin Netanyahu was given the first crack at forming a government on Tuesday, even as his corruption trial moved into its second day of evidence.

After a fourth inconclusive election in two years, there is no guarantee that Netanyahu will succeed in unblocking the political stalemate.

Meanwhile, judges will continue to hear testimony in the first of three cases involving charges of bribery, fraud and breach of trust against Israel's longest serving prime minister.

Can Netanyahu be on trial and remain prime minister?

Under Israeli law, a prime minister is under no obligation to stand down unless convicted. No other minister is protected in this way, so there are legal and political reasons why Netanyahu may want to stay at the top.

Netanyahu has pleaded not guilty. He says he is the victim of a politically orchestrated "witch hunt" by the left and media to oust him.

Did Netanyahu win the election?

No. With 30 Knesset seats, Netanyahu's right-wing Likud is the largest party. But even after a world-beating Covid-19 vaccination rollout, this is fewer seats than Likud won in 2020. And Netanyahu still lacks a backing majority from allied factions in the 120-seat parliament.

No. Nobody else has a clear path to forming a coalition from a patchwork of small parties with conflicting agendas. The winner of the fourth election could well be a fifth election.

What's the trial about?

Prosecutors allege Netanyahu granted regulatory favours worth around 1.8-billion shekels (about $500m) to Bezeq Telecom Israel. In return, prosecutors say, he sought positive coverage of himself and his wife, Sara, on a news website controlled by the company's former chair, Shaul Elovitch, who along with his wife is also a defendant in the case and denies wrongdoing.

It is alleged that Netanyahu and his wife wrongfully received almost 700,000 shekels ($210,000) worth of gifts from Arnon Milchan, a Hollywood producer and an Israeli citizen, and Australian billionaire businessperson James Packer. Prosecutors said gifts included champagne and cigars and that Netanyahu helped Milchan with his business interests. Packer and Milchan face no charges.

Netanyahu allegedly negotiated a deal with Arnon Mozes, owner of Israeli newspaper Yedioth Ahronoth, for better coverage in return for legislation to slow the growth of a rival newspaper. Mozes has been charged with offering a bribe, and denies wrongdoing.

Could Netanyahu go to jail?

Bribery charges carry a prison sentence of up to 10 years and/or a fine. Fraud and breach of trust are punishable by up to three years in jail.

Will a verdict come soon?

Unlikely. The trial could take years. But proceedings could be cut short if Netanyahu seeks a plea deal.

Yes. The allegations have become a polarising issue. In the months running up to the election, thousands of demonstrators gathered weekly outside Netanyahu's official residence and across Israel under the banner of "crime minister", demanding he quit. But his right-wing voter base sees "King Bibi" as strong on security and an influential voice for Israel abroad.

Meanwhile, Israel is facing unprecedented political paralysis, an economic crisis brought on by the coronavirus, a new US administration hoping to revive nuclear talks with Iran and a looming International Criminal Court war crimes investigation.

Benjamin Netanyahu looks likely to have to cobble together a coalition that might include Jewish ultra-Orthodox, ultranationalist and Arab parties to ...
World
3 weeks ago

The vote was a referendum on Netanyahu’s leadership, which has been tested by the graft charges against him
World
3 weeks ago

Will it be Prime Minister Benjamin Netanyahu who retains power again?
World
3 weeks ago
Next Article