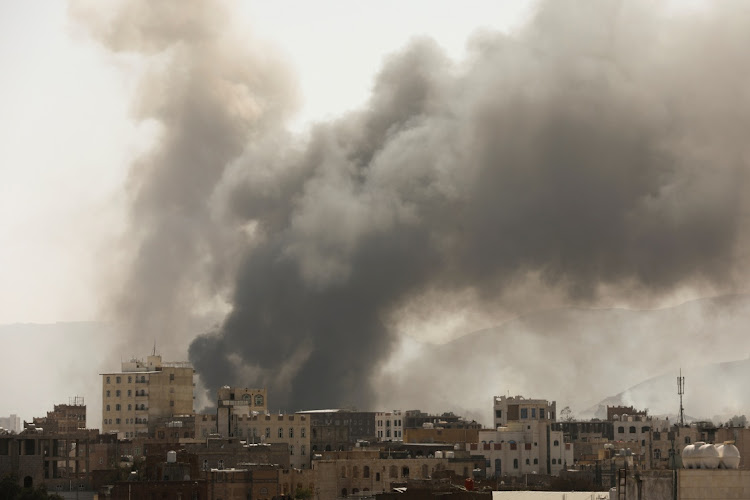 Smoke billows from the site of Saudi-led air strikes in Sanaa, Yeme, in this March 7 2021 file photo. Picture: REUTERS/KHALED ABDULLAH

Dubai — Saudi-led coalition warplanes struck military positions belonging to Iran-backed rebels in Yemen’s capital, hours after the kingdom proposed a negotiated end to a war that has raged for six years and created the world’s worst humanitarian crisis.

Rebel-run Al-Masirah television said planes targeted a military camp and an airbase in Sana’a, as well as other areas overnight. Residents reported hearing explosions and fighter jets hovering over the city. There was no immediate confirmation or comment from Saudi Arabia.

On Monday, Saudi Arabia proposed a series of steps including a ceasefire to be supervised by the UN, to begin as soon as the Houthi rebels accepted the plan. The group appeared to reject the proposal almost immediately, saying it would not countenance talks until Saudi Arabia brings its military campaign to a complete halt and lifts a blockade on the airport and ports. Saudi Arabia says there is no blockade.

Iran, which has helped supply and train the Houthis, said on  Tuesday that a Yemen ceasefire would help to pave the way for dialogue if implemented in tandem with an end to the blockade.

The Houthis have been fighting Yemen’s internationally recognised government since 2014, capturing Sana’a and swathes of the country. A Saudi-led coalition intervened the following year on the side of the government.

US President Joe Biden has vowed to end the conflict, ceasing sales of offensive weapons to Saudi Arabia, ending the Houthis’ terrorist designation to facilitate the delivery of humanitarian aid, and naming a special envoy to push for a negotiated settlement. The US push has given momentum to a UN peace effort already in the works. Both the UN and US welcomed the Saudi initiative.

Fighting has intensified as the diplomatic efforts have gained momentum, with the rebels pushing to capture the strategic city of Marib, an energy-producing area and government stronghold. In recent weeks, battles have spread to other areas, including Taiz and Hajjah, where government forces are seeking to make gains.

There has also been an uptick in Houthi-claimed attacks deep inside Saudi Arabia itself, mainly targeting oil and military infrastructure. They come as Biden clashes with Iran over how to revive a 2015 accord designed to curb its nuclear programme, leading to claims that Iran is using the group to pressurise the US to remove sanctions.

Saudi Arabia has announced repeated unilateral — but partial — ceasefires in Yemen since  2015, but they did not last
World
3 weeks ago

Was Rheinmetall’s SA subsidiary guilty of sanctions-busting and responsible for selling weapons used in attacks on civilians?
Features
1 month ago
Next Article