Will it be Prime Minister Benjamin Netanyahu who retains power again? 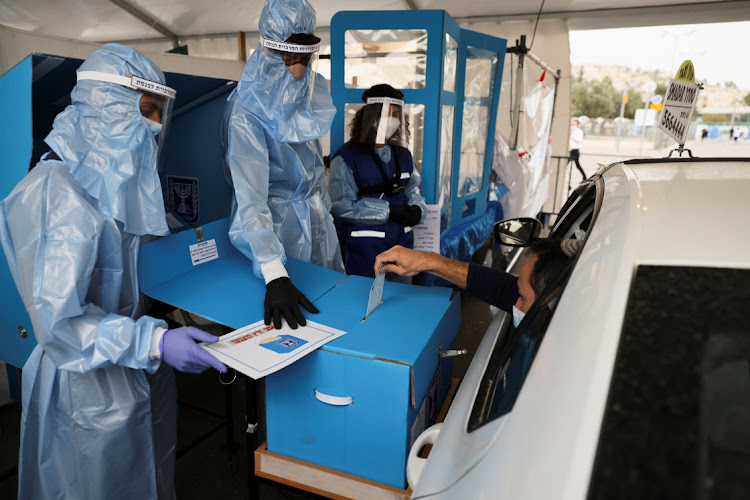 Election officials wearing protective gear instruct a man as he votes from a car at a special mobile polling station for Israelis in quarantine or infected with the coronavirus disease, as Israelis vote in a general election, in Jerusalem, Israel, on March 23 2021. Picture: REUTERS/RONEN ZVULUN

Jerusalem — Israelis began voting on Tuesday in a fourth election in two years, with Prime Minister Benjamin Netanyahu hoping a world-beating Covid-19 vaccine rollout will win him another term. With coronavirus precautions at polling booths across the country — and ballots at the airport for quarantined Israelis coming home to vote — opinion polls show the race yet again too close to call.

Israel’s longest-serving head of government, Netanyahu has managed to hold on to power through two years of inconclusive elections despite facing corruption allegations. He is now on trial on bribery and abuse of power charges, which he denies.

Opinion polls indicated an uptick for Netanyahu's right-wing Likud party in the campaign's final days, giving him a prospective coalition of conservative and ultra-Orthodox Jewish parties with about 60 seats in the 120-member parliament.

The dominant political figure of his generation, Netanyahu has been in power since 2009. But the Israeli electorate is deeply polarised, with supporters hailing him as “King Bibi” and opponents holding up placards calling him “Crime Minister”.

On the campaign trail, Netanyahu has highlighted his role in securing millions of vaccine doses from Pfizer, turning Israel into what he dubbed a “vaccination nation”.

Nearly half of Israelis have been fully inoculated with two doses, the fastest vaccine rollout in the world apart from the tiny British overseas territory of Gibraltar.

But there have also been calls for Israel to do more to ensure Palestinians in Gaza and the occupied West Bank receive vaccines. Some countries say Israel is responsible for vaccinations in territory it occupies; it argues that the Palestinians run their own health system.

Israel’s swift vaccine roll-out allowed it to reopen much of its economy before the election. Posting a video of his visit to a Jerusalem hospital on Monday, Netanyahu wrote: “Today we are the first in the world to return to life and smile again.”

But not all Israelis are convinced, with many accusing him of political misjudgements early in the pandemic that compounded the economic pain of lockdowns.

In Tel Aviv's Rabin Square, Yonatan Mei said he would judge Netanyahu over “his whole era”, not the vaccine rollout.

“Actually, it didn't affect my decision because I know that I won't choose him,” he said. “But I think that the majority of people were very affected and were very impressed by his management of the whole crisis.”

Taking to social media on election morning Netanyahu urged his supporters to bring friends and relatives to the polling stations to ensure “a strong right-wing government”.

Another possible, but less likely, outcome is an alliance among right-wing, centrist and left-wing parties opposed to a Netanyahu-led government. Polls show such an ‘anyone but Netanyahu’ alliance likely to fall short of a ruling majority.

The day before the vote, Palestinian Prime Minister Mohammad Shtayyeh described the election as an “internal” matter for Israelis, but decried the effect on Palestinians.

“All their electoral campaigns were at the expense of our land and our people, and parties are competing over more land, more settlements,” he said.

In Gaza, Hazem Qassem, a spokesperson for Hamas, said the Israeli election seemed to be taking place between the “right and extreme right”.

Israeli polling stations opened at 7am local time and will close at 10pm, when exit polls could point to voting trends, if not a clear winner.

Gantz’s Blue and White party is forecast to win barely enough votes to get into parliament, after he angered many of his supporters by agreeing to serve under Netanyahu.

Lebanese pound trades near 15,000 to the dollar, having lost a third of its value in the past two weeks
World
6 months ago