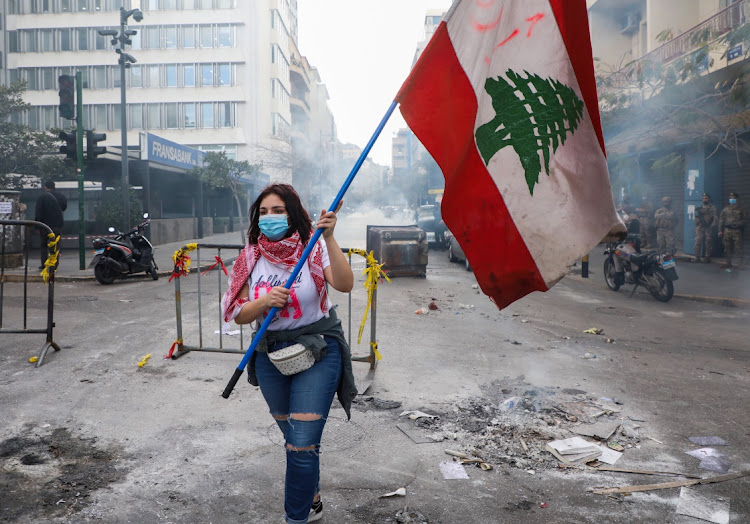 Beirut  — Protesters burnt tyres and blocked roads in Beirut on Tuesday as the Lebanese currency crashed past a new milestone.

Market dealers said the Lebanese pound was trading near 15,000 to the dollar, having lost a third of its value in the past two weeks to stand at barely a 10th of what it was worth in late 2019, when Lebanon's economic and financial crisis erupted.

Banks have blocked access to dollar deposits, and poverty is spreading —  but fractious politicians have yet to launch a rescue plan that could unlock foreign aid.

“Look at us, we're starving. We're dying. The middle class is gone. There's 3% of the country, the thieves, living off it,”  said protester Hussein Makieh.

Parliamentary committees discussed an emergency loan for the state-run electricity company after the energy minister warned that, without more money, the lights would go out across Lebanon by the end of the month.

The legislators  managed to promise only $200m out of a requested $1bn, and that amount now needs parliament's approval to go through.

The caretaker prime minister, Hassan Diab, said there were efforts to secure credit as fuel for electricity generation was running out. He also said subsidies on basic goods were covered until June.

The prospect that those subsidies could be scrapped has sparked fears of rising hunger and warnings of catastrophe from the UN.

An official source who declined to be named said that $1bn-$1.5bn remained in the pot for subsidies, which cover items including wheat, fuel and medicine.

The source said foreign reserves now stood at about $16bn, compared to a central bank estimate of $19.5bn in August.

But his designated successor, veteran politician Saad al-Hariri, is at loggerheads with President Michel Aoun and has yet to form a new government, which must carry out reforms before it can unlock foreign aid.

Elderly musician fights to get vaccine before queue-jumping Lebanese politicians

Joseph al-Hajj filed suit against Lebanon’s health ministry with help from his son, a lawyer
World
1 month ago

Judge Fadi Sawan had charged three former ministers and the outgoing prime minister with negligence over blast that killed 200 and devastated part of ...
World
1 month ago