The ‘childish’ response sparked huge online outrage, forcing the men to apologise in a country where even parts of the body are not talked about 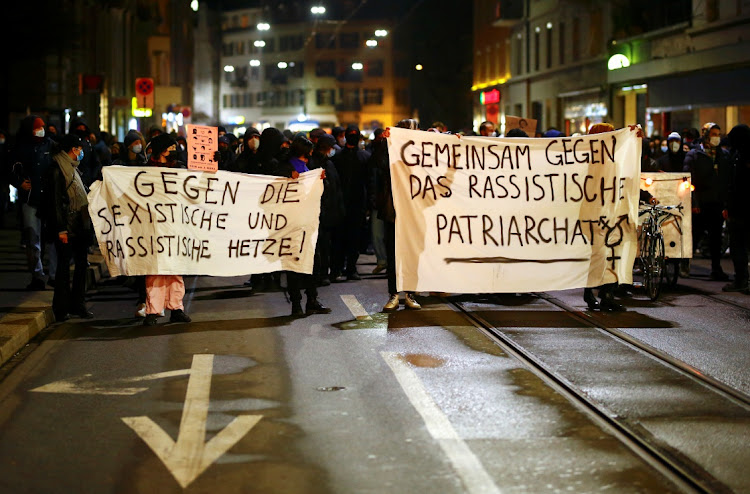 Protestors carry banners reading: "Against sexist and racist agitation!" and "Together against the sexist patriarchy" during a demonstration in Zurich, Switzerland on March 7 2021. Picture: REUTERS/ARND WIEGMANN

Beirut — Sexologist Sandrine Atallah thought she had been asked on TV to debate sex education in Lebanon — instead she was ridiculed by her male hosts, unleashing a firestorm about misogyny in the Middle East.

“The way she is talking is very arousing ... your mind goes somewhere else,” said another of the show’s male presenters.

When the doctor entered the studio on Sunday, she was repeatedly interrupted and mocked, sparking outrage online about the objectification of women in a country with a long history of systemic sexism.

Lebanese women are barred from passing citizenship to their children and personal status laws administered by religious courts favour men in matters from divorce to child custody.

Though the country strengthened its domestic violence law and criminalised sexual harassment in December, Human Rights Watch said the law placed an overly high burden of proof on victims and failed to prioritise prevention.

After widespread public pressure, the host of On Another Planet, Pierre Rabbat, apologised for “what happened on Sunday” — the second time in a week that Atallah was mocked on air.

On Twitter, users decried the ridicule and lascivious hosting in a torrent of comments. “pls don’t have kids and if you have a wife, i feel so bad for her,” Twitter user Marianne commented after the apology.

Atallah said in an interview that the twin incidents sum up the prevailing attitude to sex and women in Lebanon. “It’s so childish, like they’re 11 or 12 and aroused by just seeing a woman,” Atallah told the Thomson Reuters Foundation.

Lebanon is often billed as the most liberal country in the Middle East, but she said it was one where many don’t know the words for intimate parts of the body or how they work.

“Women, especially, often have no idea. They think that there is a wall that needs to be broken by the man the first time they have sex. I’ve had patients saying they don’t know which is the correct hole,” she said.

Atallah works at the American University of Beirut Hospital, and hosts a weekly podcast entitled Haki Sarih, or Straight Talk, with more than 100,000 monthly downloads, mostly in Saudi Arabia and Egypt.

She has also racked up a quarter of a million followers and half a  million likes on popular video-sharing app TikTok, largely used by teenagers, in less than six months.

Demand for information is high, but she said language is a barrier as many Lebanese only know French or English terms for sex organs due to the country’s colonial history and continuing questions about the nation’s identity in the Arab world.

“We’re not familiar with these terms in Lebanon. It’s tied to this attitude that we’re not Arabs and are different and better and superior — which is not true,” Atallah said.

Other countries in the region have a healthier and “much more daring” approach to sexual health.

“There’s this misconception in Lebanon that talking about these things will make people do them but the opposite is true,” Atallah said. “Sex ed teaches women they can say ‘No’. It pushes back the age of sexual activity and helps avoid unwanted pregnancies and unprotected sex.”

The likes of Fisher's sexist comments are still common at financial industry conferences, as women still number among the vast minority
World
1 year ago

After three years, the equalities minister is still ‘reviewing’ the issue rather than having outlawed it as expected
World
1 month ago
Next Article

Sexist Olympics chief offers job to another octogenarian, who turns the offer ...

Sexist Olympics chief offers job to another octogenarian, who turns the offer ...