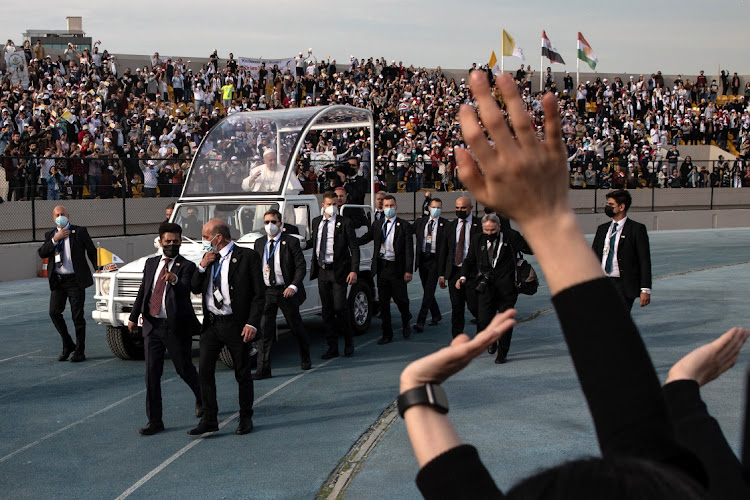 Pope Francis waves to the crowd as he arrives to conduct mass at the Franso Hariri Stadium in Erbil, Iraq, March 7 2021. Picture: CHRIS MCGRATH/GETTY IMAGES

Mosul — Pope Francis concluded the historic first visit by a pope to Iraq with a trip to the ruined city of Mosul on Sunday, promising followers “fraternity is more durable than fratricide”.

Francis visited the northern city to encourage the healing of sectarian wounds and to pray for the dead of any religion.

The pope saw ruins of houses and churches in a square that was the old town's thriving centre before Mosul was occupied by Islamic State (IS) from 2014 to 2017.

“Together we say no to fundamentalism. No to sectarianism and no to corruption,” the Chaldean archbishop of Mosul, Najeeb Michaeel, told the pope.

Much of the old city was destroyed in 2017 during the battle by Iraqi forces and an international military coalition to drive out IS.

Francis, who flew to Mosul by helicopter, was visibly moved by the devastation around him. “How cruel it is that this country, the cradle of civilisation, should have been afflicted by so barbarous a blow, with ancient places of worship destroyed and many thousands of people — Muslims, Christians, Yazidis and others — forcibly displaced or killed,” he said.

Intense security has surrounded his trip to Iraq. Military trucks mounted with machine guns escorted his motorcade and plainclothes security men mingled in Mosul with the handles of guns emerging from black backpacks worn on their chests.

In an apparent direct reference to IS, Francis said hope could never be “silenced by the blood spilt by those who pervert the name of God to pursue paths of destruction”.

He then read a prayer repeating one of the main themes of his trip, that it is always wrong to hate, kill or wage war in God's name.

Fighters of IS, a Sunni militant group that tried to establish a caliphate across the region, ravaged northern Iraq from 2014-2017, killing Christians as well as Muslims who opposed them.

Iraq's Christian community, one of the oldest in the world, has been particularly devastated by the years of conflict, falling to about 300,000 from about 1.5-million before the US invasion of 2003 and the brutal Islamist militant violence that followed.

Father Raid Adel Kallo, pastor of the destroyed Church of the Annunciation, told how in 2014 he fled with 500 Christian families and how fewer than 70 families are present now.

“The majority have emigrated and are afraid to return,” he said. “But I live here, with 2-million Muslims who call me father and I am living my mission with them.”

A Muslim member of the Mosul committee, Gutayba Aagha, urged the Christians who had fled to “return to their properties and resume their activities”.

Francis later flew by helicopter to Qaraqosh, a Christian enclave that was overrun by IS fighters.

He then said mass in Erbil, capital of the autonomous Kurdistan region, where thousands of people packed a stadium.

At the end of the mass, the last official event before he returns to Rome on Monday, Francis told the crowd, “Iraq will always remain with me, in my heart”.

Sistani wields enormous influence over politics. His edicts sent Iraqis to free polls for the first time in 2005, rallied hundreds of thousands of men to fight against IS in 2014 and toppled an Iraqi government under pressure from mass demonstrations in 2019.

Sistani, 90, rarely takes meetings, and has refused talks with Iraq’s current and former prime ministers, according to officials close to him. Sistani agreed to meet the pope on condition that no Iraqi officials would be present, said a source in the president's office.

The pope has visited predominantly Muslim countries including Turkey, Jordan, Egypt, Bangladesh, Azerbaijan, the United Arab Emirates and the Palestinian territories, using those trips to call for inter-religious dialogue.

Pope Francis is fallible when it comes to economics

Providing debt relief for poor countries may be a moral imperative, but financially it just isn’t having much effect, writes Ferdinando Giugliano
Opinion
1 year ago
Next Article