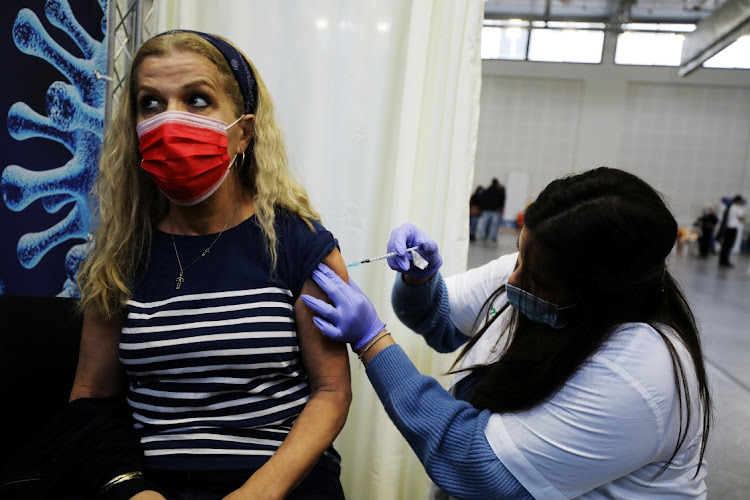 A woman receives a vaccination against the coronavirus in Petah Tikva, Israel, January 28 2021. Picture: REUTERS/AMMAR AWAD

Melbourne — Israel, with the highest proportion of citizens vaccinated against Covid-19 in the world, found it took three weeks for the Pfizer-BioNTech shot to start curbing new cases and hospitalisations.

Researchers in the Middle Eastern country reported preliminary observations on Wednesday from a national immunisation programme that began on December 20. Improvement in the number of new cases and hospitalised patients occurred 21 days following the vaccination campaign, the scientists said, noting that the real-life effect of vaccines may take longer than was demonstrated in clinical trials.

“To our knowledge, no study thus far has studied the impact of the vaccination campaign on the population level and its effect on the patterns of pandemic dynamics,” scientists from the Weizmann Institute of Science in Rehovot said. “As Israel is one of the first countries to implement a vaccination campaign on this magnitude, we believe that this quantification may be of major interest for many countries.”

Israel’s vaccination drive began just before a more transmissible SARS-CoV-2 strain emerged, fueling infections and leading to a third lockdown on January 8. As of Tuesday, 28% of Israelis — including three-quarters of those 60 years or older — had either received two doses of the vaccine or had recovered from an infection. At the peak, 229,508 doses were administered in one day.

Efficacy might differ slightly from the clinical test data in real-life settings for several reasons, the researchers said. Logistics, including the refrigeration, storage, transportation and administration of the vaccines during a rapid rollout may be imperfect, lowering effectiveness, they said.

The US Centers for Disease Control and Prevention (CDC) recommends the Pfizer-BioNTech vaccine be stored at -80°C to -60°C.

The researchers also noted that older people — who were prioritised earlier in Israel’s vaccination campaign — potentially had a reduced or delayed response to vaccination due to age-related deterioration in their immune function.

It’s also possible that the efficacy of the vaccine is reduced in the face of some of the emerging virus strains, including the B.1.1.7 variant discovered in the UK that’s now prevalent in Israel, and the 501Y.V2 first observed in SA, the researchers said.

They also noted that vaccinated individuals may alter their behaviour and decrease adherence to public health prevention guidance, such as physical-distancing and wearing face masks, thereby increasing viral transmission.

Parts of Israel with higher infection rates and a lower socio-economic status had lower uptake, even with adequate vaccination availability, the researchers found, noting a need to encourage citizens in these areas and to make shots even more accessible in them.

The researchers concluded that more studies aimed at assessing the effectiveness of vaccination on reducing the transmission of SARS-CoV-2 are needed both on the individual and on the population level with larger follow-up and in additional populations.

As new variants emerge — with estimates that there are 4,000 of them — studies into combining different types of vaccines is already under way
World
5 months ago

Covax allocates 3.1-million vaccine doses to SA in first round, which could ensure the government has enough doses to cover the 1.25-million health ...
National
5 months ago
Next Article